Why I’m Ignoring Next Week’s Election

“Justin, how will our stocks be impacted by the election?”

Several IPO Insider subscribers have asked me this lately.

I understand why they’re asking.

The biggest presidential election of our lifetimes is just around the corner. It’s all many people want to talk about.

If you watch cable news, you may feel like the fate of everything hangs in the balance... from our environment to our economy to our health.

But as I’ll show you today, the election has almost zero impact on my stock picking process.

That may surprise you. You may even think I’m foolish for ignoring the election. But here’s the thing…

If you’re like most people, you have a political bias… a candidate you want to be president.

And when you have a “horse in the race,” you’re more emotionally invested in the outcome.

When emotions seep into your decision-making process, you’ve got a problem. Emotions blur the line between what you want to happen vs. what’s most likely to happen... which can cost you a lot of money.

Even if you can rein in your emotions, politics can still end up costing you thousands of dollars. This is because, while many political stories “feel” important, they’re usually just “noise” that’s all but impossible to profitably act upon.

So, when making investing decisions, I suggest you tune out politics entirely.

In this essay, I’ll show you how I let price action guide my decisions... and I’ll give you one of my favorite megatrends that’s sure to keep producing profits no matter who wins next Tuesday.

I analyze hundreds of charts every day. I examine the price action of stocks, bonds, commodities, interest rates, and the VIX, aka the “fear index.”

I do this because price is objective. It doesn’t care who I think the next president of the United States will be. Instead, it tells me what millions of market participants are doing with their own money.

This is FAR more important than what I or anyone else thinks will happen.

So, none of my recent trades or recommendations are “bets” on the presidential election. Instead, I’ve been doing what I’ve done all year.

Megatrends reshape society. They impact people around the world.

They play out over many years. And they’re so big and so important that nothing—not even a presidential election—can significantly change their course.

The internet, the “digitization” of money, and the hypergrowth of social media are some of the biggest megatrends of the last three decades.

Stocks leading these megatrends have generated incredible wealth. They’ve been some of the most lucrative investments of the past decade.

Politics didn’t stand a chance against these megatrends!

This idea is also how I pinpointed the massive opportunity in Snap (SNAP) back in January.

At the time, Snap was a hated stock. It was the black sheep of social media stocks. But I knew that Snap had quietly become an augmented reality (AR) pioneer.

Last Wednesday, Snap soared 30% after crushing its earnings. It’s now rallied more than 120% since I encouraged readers to buy it in the RiskHedge Report in January. 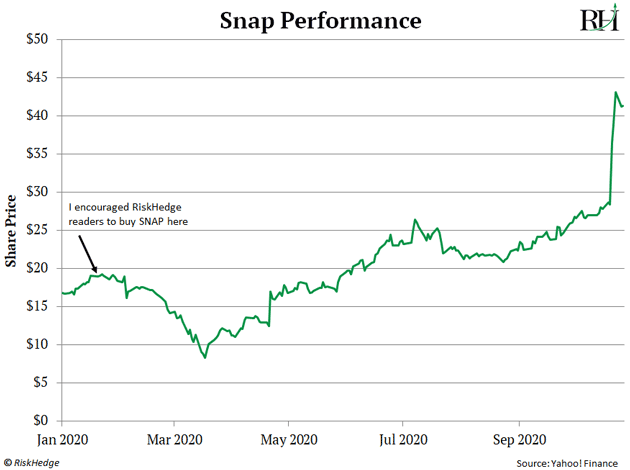 But focusing on megatrends isn’t just highly profitable. It’s also much safer than you might think.

Remember, megatrends have massive tailwinds working in their favor. They’re going to unfold no matter if there’s a Democrat or Republican in the White House.

The chart below says it all. You’re looking at performance of the Invesco Solar ETF (TAN)—a fund that invests in a basket of solar stocks—since the start of 2019.

It’s skyrocketed nearly 800% in just under two years. That’s an unbelievable move. After all, we’re not talking about a small-cap stock... or even a large stock. We’re talking about an entire industry! 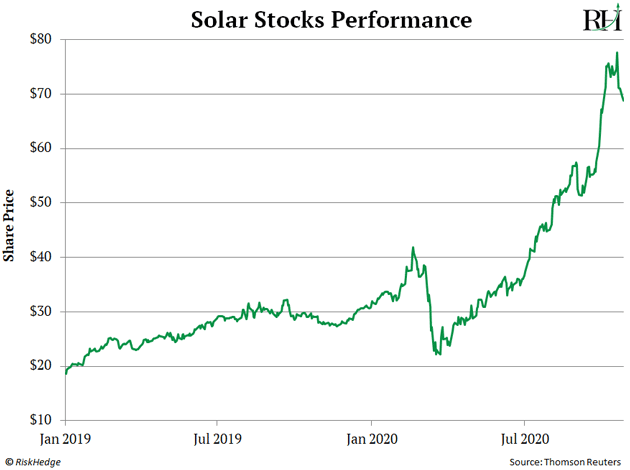 Solar stocks shot to the moon even though President Trump has done little for green energy. In fact, Trump pulled out of the Paris Climate Agreement in 2017… and said he wanted to bring back coal jobs.

Speaking of coal... the death of dirty coal in the US is an unstoppable megatrend going in the other direction. Below you’ll see the performance of the VanEck Vectors Coal ETF (KOL). It’s plummeted 57% since the start of 2018.

Trump was never going to save coal. You would have lost big time if you invested in coal stocks for political reasons. 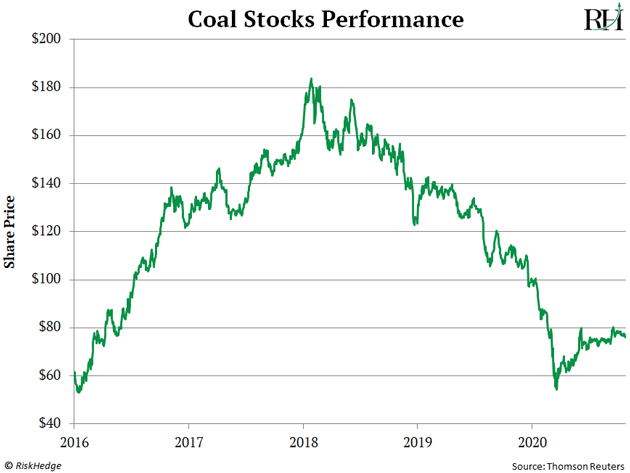 You’d be much better off focusing on unstoppable megatrends like solar energy, genomics, and edge computing.

In fact, I’m incredibly bullish on the long-term future of all these trends.

So, wait for them to pull back into support before taking positions.