Four Ways to Profit Off Today’s Most Overlooked Megatrend

Justin’s note: Before I get to today’s essay, a quick reminder...

Marin is a hedge fund manager, New York Times bestselling author, and one of the most trusted and well-connected dealmakers in the resource space.

Right now, Marin says the stage is set for what he believes are “the greatest investment opportunities we’ve seen in a generation.”

During the broadcast, he explained why—and even revealed his No. 1 gold stock to buy TODAY.

Because this opportunity is so big—and urgent—we’ve made a free replay available to you. You can watch it here.

I tuned in myself and I can tell you this: If you have any money in the markets, this is a must-watch.

Now, on to today’s RiskHedge Report...

Folks ignore this opportunity because it’s tough to wrap your head around. But it’s absolutely worth understanding.

The companies in this space are revolutionizing healthcare.

Trillions of dollars are on the line.

So, I don’t expect this megatrend to fly under investors’ radars much longer.

In fact, the stocks at the forefront of this megatrend are “waking up” before our eyes. As someone who trades stocks for a living, this tells me huge gains are on the horizon.

In a minute, I’ll tell you four ways to profit off this “revolution.”

But first, let’s cover the basics…

Genomics is the study of all of a person’s genes.

…and how those genes interact with each other and our own environments.

By understanding all of our genes (our “genome”), scientists can discover secrets embedded in our DNA.

That is a gamechanger.

With genetics, scientists only look at a single gene. With genomics, they examine all the genes that make up an organism.

And that helps us understand human biology at a much deeper level.

Thanks to genomics, scientists can now determine at an early age what diseases a person might contract later in life. It can also help doctors detect problems earlier and more accurately treat them.

It’s also helping us understand why some people who smoke, never exercise, and eat unhealthy foods live to be 100 years old.

Armed with this information, scientists and doctors can better understand how someone will react to a particular drug or treatment.

That opens the door for “personalized” or “precise” medicine.

Understanding a person’s genetic makeup eliminates much of the guesswork. It will help doctors develop tailor-made solutions for every patient.

Gene editing is exactly what it sounds like. It’s the ability to manipulate a person’s genes.

It sounds like science fiction. But scientists are already able to “cut and paste” mutations that cause cancer out of our DNA.

I know this is all very technical. But the key takeaway here is that genomics is going to completely transform healthcare.

Breakthroughs in this field will ultimately allow billions of people to live longer and healthier lives. And the companies that make this happen will reap fortunes. Investors who understand this stand to make a fortune in the coming years.

Of course, none of this was possible until recently.

The Human Genome Project took more than 10 years and about $3 billion to map the first human genome.

Three years from now, the cost will fall to just $100. That’s one-millionth of what it cost two decades ago!

When that happens, DNA sequencing will officially “go mainstream.”

That’s up from 2.4 million genomes two years ago!

This will open a whole new world of understanding. We’ll truly be able to understand diseases on a personal level!

Scientists could even use this tidal wave of information to cure cancer, HIV, pediatric blindness, and many other diseases!

And yet, the genomics revolution is completely ignored by the masses. Again, this is partly because the science of genomics will make most people’s heads spin.

The world’s biggest pharmaceutical and life sciences companies are at the forefront of this megatrend. Much smaller companies are also leading this revolution.

But that’s no excuse to ignore this opportunity.

Editas Medicine (EDIT)—another major player in the gene editing space—spiked 131% in its first two months as a publicly traded company!

NeoGenomics (NEO), which specializes in cancer diagnostics, has rallied more than 5,000% since 2016!

Of course, anyone could cherry pick examples to prove their point. But this isn’t the case of just a few stocks doing well…

Look at this chart. It shows the performance of the ARK Genomic Revolution ETF (ARKG) since the start of 2017.

This fund invests in companies at the forefront of genetic editing. It’s actively managed by ARK Invest, an investment manager laser-focused on “disruptive innovation.”

ARKG has been on an absolute tear since the start of 2017.

During that stretch, ARKG outperformed the biotech stocks by 3-to-1. It also crushed healthcare stocks by more than two-fold! 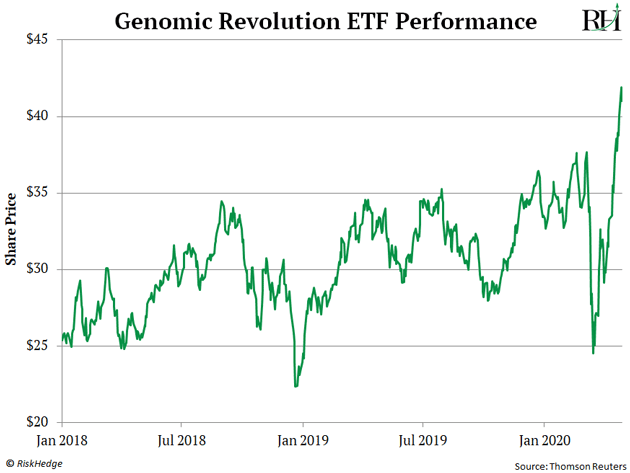 Don’t worry if you missed out on this initial surge. Genomic stocks are just getting warmed up.

That puts the fund in the top 1% of stocks.

In other words, genomics stocks are leading the market.

At RiskHedge, we focus on leaders because they deliver the biggest gains during bull markets. They also shine during bear markets. They either fall much less than most stocks… or surge when most stocks are plunging.

In today’s uncertain environment, these are the only stocks you should own.

Cathie Wood, ARK’s CEO and founder, recently called the genomic revolution “one of the most exciting investment ideas we have ever experienced.”

Genetic factors play a role in nine of the 10 leading causes of death in the United States—outside of car crashes and other accidents. In many cases, they’re the reason people get heart disease, cancer, and diabetes.

And yet, only 5% of the diseases caused by one gene are treatable today. With gene editing that number could eventually reach 100%. According to Cathie Wood, those diseases alone represent a $2 trillion opportunity. The market for diseases caused by multiple genes is significantly larger!

And yet, CRISPR Therapeutics, Editas Medicine, and Invitae Corporation (NVTA)—three companies pioneering gene editing—are together worth less than $7 billion!

The easiest way to capitalize on this megatrend is to invest in ARKG.

You may also want consider investing in EDIT, NVTA, and CRSP. These three companies are at the forefront of the genetic editing revolution. They’re also all top-ten holdings in ARKG.

By investing in these companies, you’re making concentrated bets on companies turning the entire healthcare model on its head! You’ll also be investing in companies that will likely save countless lives. It’s a true win-win!

Just understand that the genomics revolution will unfold over the next 20 to 30 years. So, treat these stocks like long-term speculations.

P.S. This is just one of many overlooked megatrends I’ve highlighted over the past month. I’ve also shown you the big opportunities in semiconductors… “stay at home” stocks… “chaos” stocks… diabetes stocks… and more.

Have you started investing in them? What other megatrends are you betting on today? Let me know how it’s going at jspittler@riskhedge.com.