If Biden Wins, These Stocks Will Go Ballistic

“We're not just going to tinker around the edges.

We're going to make historic investments that will seize this moment in history.”

Presidential front-runner Joe Biden said this three weeks ago. He was talking about his blockbuster green energy spending plan.

As you may have heard, Biden plans to spend $2 trillion on clean energy and infrastructure over four years if he becomes president.

That’s a staggering amount of money. The Trump administration currently allocates less than $100 billion per year to clean energy technology. So, we’re talking about a 20-fold surge in spending!

It’s an ambitious goal. One that would require millions of solar panels, and tens of thousands of wind turbines!

You may not think that climate change is a big deal…

Or maybe you don’t think Biden should be America’s next president.

But you shouldn’t let your political views get in the way of big investment opportunities. That’s an expensive mistake many people make.

Instead, I like to focus on the most likely outcomes… and invest accordingly. And there’s no denying that Biden’s plan would turbocharge green energy stocks.

We’re talking about $2 trillion, after all!

The solar industry is still a relatively small market. It accounts for just 2% of the total electricity generated in the United States.

It’s also only about a $53 billion industry worldwide. But it’s growing like crazy. By 2026, the global solar industry is projected to be worth $223.3 billion.

Of course, Biden isn’t a shoo-in. There’s a chance that Trump is our president for four more years.

Residential solar installations hit a record high during the first quarter of this year. And last year, solar accounted for 40% of all new power capacity.

The cost of solar energy has plunged 90% over the past decade. And the price of residential solar power is projected to fall another 17% over the next five years.

Not only that, 28 states have set CO2 emission reduction targets, and 23 states have signed the US Climate Alliance pledge to reduce emissions by 28% by 2025.

The world’s biggest companies are also committed to green energy…

Last week, Apple (AAPL) announced its plan to become “carbon neutral” across its entire business by 2030.

Microsoft (MSFT) is aiming to become carbon negative by 2030. By 2050, the tech giant plans to remove all carbon emitted by the company—either directly or by electrical consumption—since the company was founded in the 1970s!

Amazon (AMZN) is purchasing 100,000 electric vans from US-based electric vehicle maker Rivian. It plans to have all of them on the road by 2030. The retail giant also operates 91 solar and wind projects worldwide!

And it’s still very much the early days.

That’s why I’ve been pounding the table on hydrogen and solar stocks for months.

It’s also why I recommended hydrogen truck maker Nikola Motors (NKLA) to subscribers of my premium advisory IPO Insider back in March. Three months later, we closed out this trade for a 398% return!

When it comes to solar stocks, the chart below tells you all you need to know. It shows the performance of the Invesco Solar ETF (TAN), which invests in a basket of solar stocks, since Trump took office in January 2017. It’s nearly tripled in value! 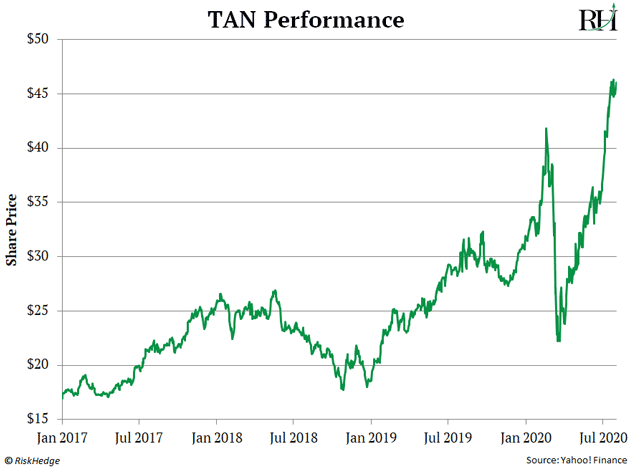 Compare that with the Energy Select Sector SPDR Fund (XLE), which invests in oil and gas stocks. It’s plummeted 51% over the same period. 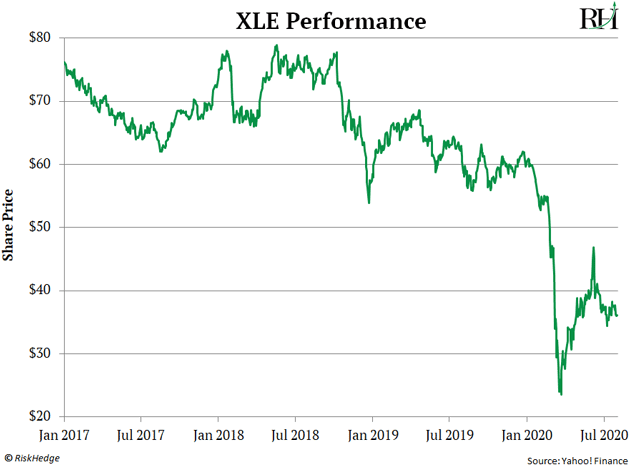 The VanEck Vectors Coal ETF (KOL), which invests in coal stocks, has also been a terrible investment… despite Trump’s best effort to rescue the dying industry. KOL has plummeted 44% since Trump took office in early 2017. 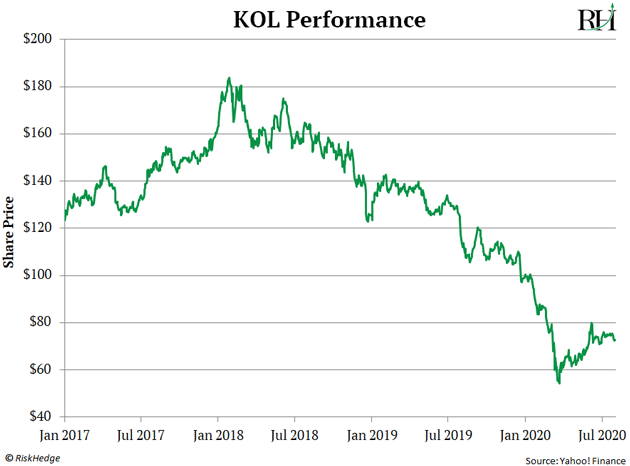 And I see them surging much higher in the months ahead… with or without Biden’s help.

To understand why, look at this chart. It shows the performance of TAN since the fund launched in 2008. 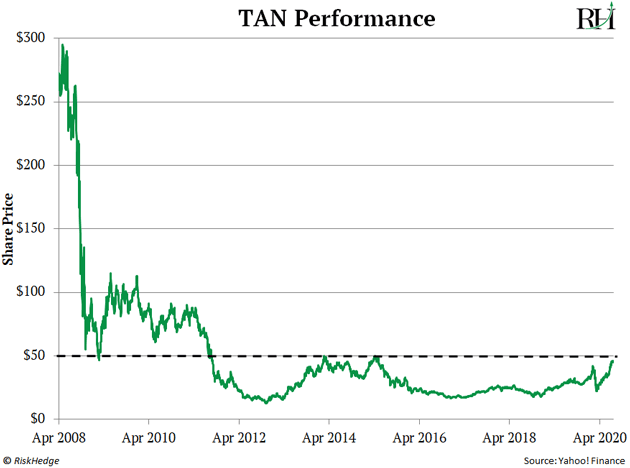 TAN has spent the past eight years “carving a bottom.” It’s now bumping up against a level that has already acted as a resistance twice before.

In other words, it’s likely only a matter of time before TAN rips through this key level. If that happens, solar stocks should be off to the races.

Have you acted on my guidance to buy solar stocks this year? If so, let me know how it’s going at jspittler@riskhedge.com.

99% of investors have never even heard of this new technology.

But behinds the scenes, it’s quickly becoming the greatest disruptive innovation in a generation.

Bigger than the PC, internet, or smartphone…

See for yourself right here.