** Is “AI” the new business degree?
** Ask yourself this one question
** Stephen’s greatest frustration

What a weekend in the mailbag!

His argument, which you can read here, is that artificial intelligence—as it’s commonly understood—doesn’t exist.

Stephen, you are wrong. AI is going to do unimaginable things in the next few years. It will change almost everything that we do on a daily basis. I hate to rock your boat but you simply don’t understand what “AI” is. —George

I don’t think AI is a fraud. A machine that can learn and improve its function, without human intervention, is demonstrating AI, even if its skills fall into a very narrow range. —Allan

You are dead right on AI, by looking at it from a businessman’s point of view. —Mike

I am with you. The day when AI can compete with human on all levels, including emotions, is the day human will be wiped out.—Huang

According to Stephen, folks generally see AI as an “all-knowing,” conscious machine that can solve any problem.

There are two issues with this “Hollywood” version of AI.

Two, taking it seriously can hurt your investment returns.

The core problem is most investors throw “AI” and “AI stocks” into one big, useless group. In reality, AI is hundreds of different, specialized computers that can each do ultra-specific tasks.

I called up Stephen for more. Here’s what he told me:

Remember when you were a kid and you asked a friend what their dad did? “He’s a businessman,” they’d say.

All you knew was he probably wore a suit each day and carried a briefcase to work. But that didn’t really describe what he did for a living.

He could have been a Hollywood movie executive… or a boring number cruncher... or owned the local pizza joint. But simply calling him a “businessman” is useless. It’s what you tell a child who doesn’t know any better.

Hundreds of thousands of teenagers sign up to get “business” degrees each college semester. Yet… there is no skill called “business.”

Just like “business,” AI is a general term that has absolutely no concrete meaning. So, it’s counterproductive to try to get rich off the latest “AI” stock.

That last part is key. Because it means the millions of folks looking to invest in “AI stocks” are going about it wrong...

How to filter out the fakes…

Look up “top AI stocks” and you’ll get Amazon (AMZN), Microsoft (MSFT), and Google (GOOG). These are 3 of the biggest companies on the planet. As you can imagine, AI only makes up a tiny sliver of their overall business.

Consider this: Venture capital firm MMC Ventures recently studied 2,830 “AI” start-ups. In 40% of cases, it found no evidence AI was an important part of their business!

In short... many companies that have nothing to do with AI are calling themselves “AI companies”... simply because it’s a hot buzzword that attracts investor interest.

So… what are you left with?

Well, Stephen says you only need to ask one simple question to weed out the fakes:

What percent of their sales truly comes from AI?

This will help you cut through the “noise.” For example, Nvidia (NVDA) is one of the few companies with a true booming AI business. In the first half of 2020, its AI-related sales topped $2.8 billion.

Finally, as Stephen says, don’t view AI as a “sector” in the stock market. Remember, if you lift up the general “AI hood”… there are many specific, exciting opportunities hiding underneath.

One of his favorite disruptions under the AI hood is computer vision. Read his writeup here to see its full potential… Then go here to access his #1 computer vision stock today.

For years, the newest and most exciting technologies have been OFF LIMITS to the average investor.

Finally, that’s all changing. Let me show you...

How many times have you heard about an exciting new technology like self-driving cars—only to realize there are no good stocks to “play” it?

According to Stephen, most folks don’t appreciate how long it often takes for a breakthrough technology to become a viable business.

Take buying and selling homes online. This isn’t a new concept. In fact, the tech behind it has been around for years!

But it’s always been just that: an intriguing technology… with no real way to profit unless you were a venture capital investor. 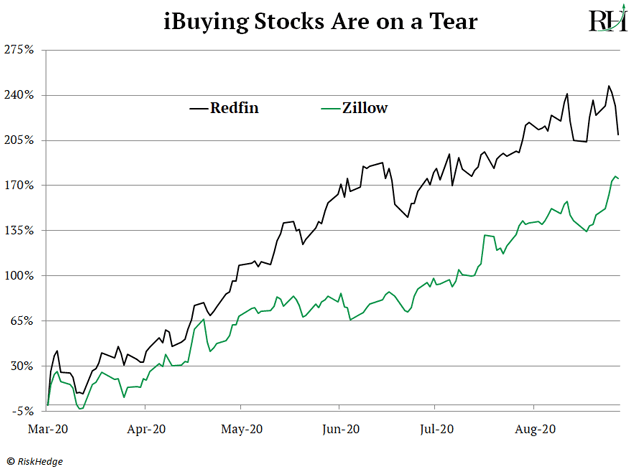 Another example: Did you know the first gene editing technologies were developed in the late 1900s? But you couldn’t find any viable public companies to invest in until just the past couple of years.

As Chief Trader Justin Spittler explained in April, genomics is now one of the top investment opportunities on the planet. Industry leaders CRISPR Therapeutics (CRSP) and Editas Medicine (EDIT) have both skyrocketed 100%+ over the past 6 months: 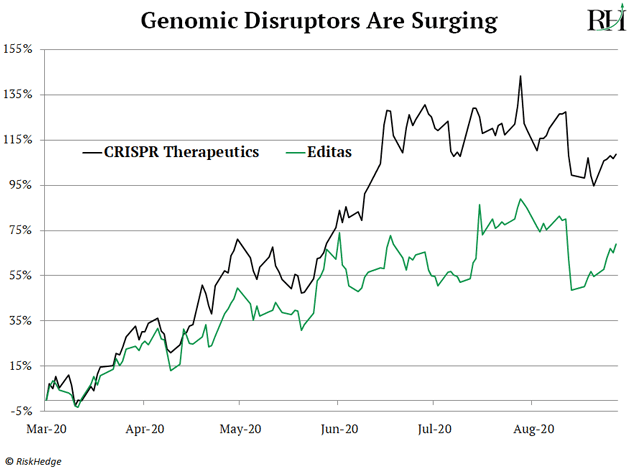 This is an exciting time; we’ve turned the corner on a “sea change” where dozens of exciting breakthrough technologies are now becoming viable businesses all at once.

If you try to invest before it’s a viable business, you’ll find there’s a lack of options. Often, your only options will involve risky nanocaps run by scientists with no real business sense.

We’ll have a lot more to say about this soon. Let me know which fast-growing stock opportunity you’re taking advantage of at chrisreilly@riskhedge.com.