Who will be crowned the world’s first trillionaire?

You likely know Cuban as a star investor on ABC’s Shark Tank. The billionaire also owns the Dallas Mavericks.

His big call? “The world's first trillionaires are going to come from somebody who masters AI...”

The core idea of AI is a machine that learns and thinks just like you or me. Most importantly, it learns all by itself, without human intervention.

Nothing grabs folk’s attention like the thought of self-learning, intelligent machines.

Tesla CEO Elon Musk hit the headlines when he said: "We’re headed toward a situation where AI is vastly smarter than humans. I think that time frame is less than five years from now.”

A friend recently phoned me up and asked for my take on AI. She read about how smart robots will “take all the jobs” and wanted to push her teenage daughter into the industry.

In short, AI is depicted as this futuristic technology that will soon transform every industry under the sun.

“Within 20 years machines will be capable of doing anything man can do.”

Listen to Mark Cuban or Elon Musk and you’d think we’re on the cusp of an AI revolution. The reality is we’ve dreamt of human-like robots for decades.

Ever watch sci-fi classic 2001: A Space Odyssey? The 1968 movie is best remembered for the intelligent supercomputer, HAL 9000. HAL could think just like a human, and had the ability to scheme against anyone who threatened its survival.

Even in the 1950s, we imagined bionic men would soon be running factories. Within a decade cyborgs would be doing our housework. But instead of intelligent robots, we got a different breed of machines…

We got dishwashers, air conditioners, and microwaves!

For 60 years, scientists have tried creating an intelligent robot that can do anything you or I can.

This is what most people envision when they hear “AI.” A human-like machine that can talk… run… think… and drive just like we do.

My friends, this is totally wrong.

AI isn’t one single human-like machine like you see in the movies. It’s really a bunch of intelligent computers that each do ultra-specific tasks.

For example, medical imaging disruptor Paige.AI is using computer vision to revolutionize the way we diagnose cancer. Paige.AI fed millions of real-life medical images into its computer program and taught it to detect early signs of tumors.

And get this… it recently tested the system by scanning 12,000 medical images for potential tumors. It had never seen these images before, yet “achieved near perfect accuracy.”

In other words, this computer has learned to recognize cancerous tumors better than human doctors.

This example gets filed under AI.

But think about it… this system has only mastered one specific task. Ask it to drive a truck and it wouldn’t know how to start the engine!

I want you to sear this idea into your brain. AI is not one single robot that can do everything. It’s really a bunch of machines that perform set jobs with little crossover.

In short, some computers will learn to drive. Others will spot tumors. But they can’t do both.

Paige.AI is just one example of machines transforming into superhuman doctors.

Other teams are teaching computers to drive. A couple of months ago, I mentioned that Amazon snapped up top self-driving car startup Zoox for $1.2 billion. Zoox’s “computer on wheels” is so good at driving it can zip through San Francisco’s busy streets without a human driver.

Then you have firms developing checkout-free grocery stores, which turns your local Whole Foods into a giant supercomputer.

For example, in July, Amazon launched its “Dash Cart.” The shopping cart uses computer vision algorithms and sensors to identify the items in the cart. So you can simply grab items… throw them in the cart… and walk out.

In short, these are all world-changing technologies that will make many folks rich. But do you see why it’s useless to throw them into the same AI bucket? They have little in common with each other.

As I said, in the ‘50s, we thought cyborgs would soon be doing all our housework. Instead we got “robots” that only do narrow jobs, like dishwashers and microwaves.

Ditto for the current wave of AI. Only this time, it will be far more disruptive.

I recently saw a private study that concluded AI is the #1 searched term on Google among investors.

Nothing else comes close.

Look up “best AI stocks” now and you’ll be disappointed when names like Google, Amazon, IBM, and Facebook pop up. These tech giants only get a sliver of their sales from AI-related business!

But this feeds into my key point: AI, as we know it, doesn’t exist…

You should focus on the new, specific disruptions being invented as I type.

For example, Veritone (VERI) trained its computers to transform audio and video “data” into valuable insights for companies. Its stock jumped 400% this year.

Cognex (CGNX) built assembly-line inspection cameras that “learn” for each product they see. Its shares have soared 90% since March.

Ever hear of Nuance Communications (NUAN)? It invented a customer service messaging tool that talks to you just like a human. Its stock shot up 200% in the past few months.

I urge you to look past the big, attention-grabbing banner of AI. Instead, focus on the new, unique disruptions hiding underneath.

This is where you will find big money-making opportunities right now.

I’d love to know your thoughts on this… Do you think AI is a “fraud” too? Or am I 100% wrong? Let me know at stephen@riskhedge.com.

Why is Jeff Bezos so worried?
Well, as we just uncovered, there’s a simple reason the richest man on earth is terrified...
No one else is reporting on this: But it all has to do with one small company.

The ONLY tech stock with the power to take down mighty Amazon for good... 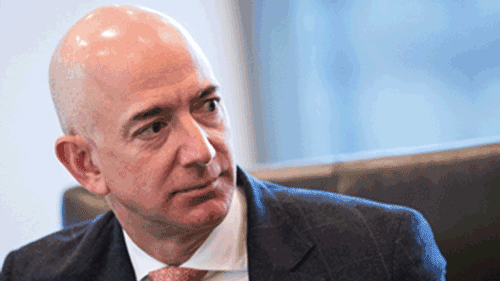