“Should I buy this?”

A friend of mine texted me this last week.

I opened the message and clicked the link inside. It took me to the website of a company called “Mirror.”

Mirror is a startup based in the United States. It makes interactive mirrors that you can use to do boxing, Pilates, and yoga classes from home.

Mirror describes its product as “the nearly invisible interactive home gym.” Here’s what one looks like. 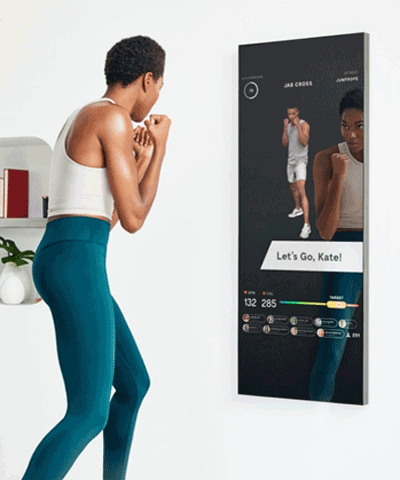 He’d go to the gym instead. But that’s not an option right now.

All the gyms are closed there.

Of course, New York’s not the only major city on lockdown. Coronavirus has turned the entire world upside down.

This is why my friend is thinking about buying a Mirror. Exercising in his living room is basically his only option right now.

I’m sharing this story with you because it points to a massive money-making opportunity. And I’m not talking about investing in Mirror, which is still private.

I’m talking about investing in companies at the forefront of the augmented reality (AR) megatrend.

AR—in a nutshell—combines the digital world with the real world.

When most people think of AR, they imagine holograms.

And it’s true. This technology used to only exist in sci-fi movies like Blade Runner and Star Wars.

But not anymore. As I explained in January, AR is going mainstream before our eyes.

You’ve probably even used it…

Have you ever used Facebook (FB) to video chat with your family? The bunny ears or silly mustache filters that you may have played around with are basic AR.

Mirror, the company I mentioned earlier, also uses AR to recreate the experience of a kickboxing or bootcamp class.

Of course, AR isn’t just revolutionizing how we exercise and interact with loved ones.

Consider how Porsche is using AR.

Porsche is known for its sleek, high-end sportscars.

The company has been experimenting with AR since 2017. Specifically, it’s been using specialized AR glasses to diagnose problems in vehicles.

But its use of AR tripled since the coronavirus pandemic broke out, according to Car and Driver! And this is because technicians aren’t going into dealerships right now. Instead, they’re “working on” cars remotely.

It’s no secret that shopping centers, malls, and boutiques worldwide have closed their doors.

That’s a big problem for traditional retailers. But social distancing has been a blessing in disguise for online retailers, especially ones that have embraced AR.

You might think that furniture sales have slid because of coronavirus. But Wayfair’s thriving in today’s environment.

In fact, the company just reported blow-out earnings this morning. Its sales surged 20% in the first quarter… causing its stock to pop as much as 35% today!

Wayfair has now surged more than 700% since March! 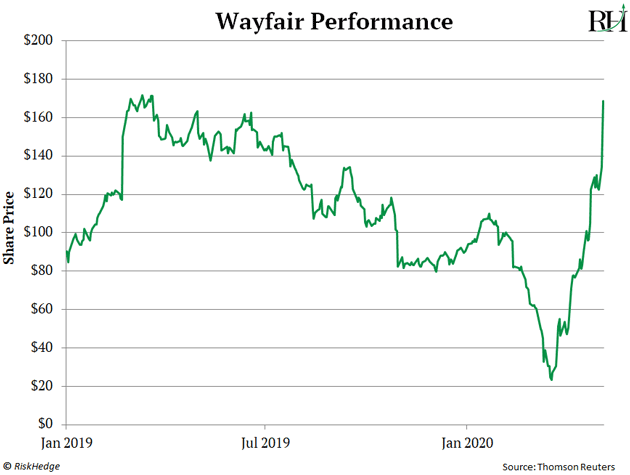 If you’re wondering how Wayfair’s thriving, I’ll tell you.

Wayfair has reimagined the experience of buying furniture. Its app lets you see how a lamp would look on your coffee table. See for yourself. 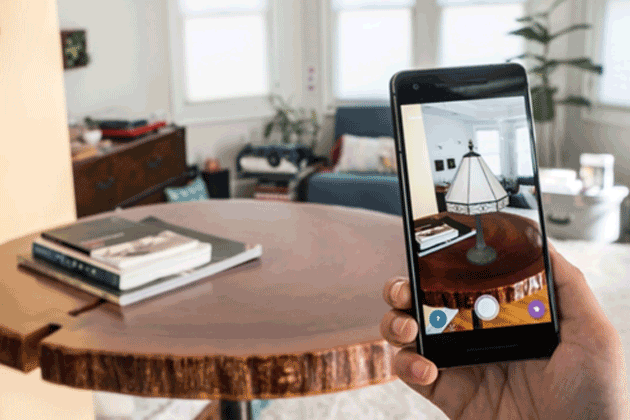 This has allowed Wayfair to steal market share, since its brick-and-mortar competitors are effectively shut down.

The Swedish furniture company IKEA has a similar AR feature in its app.

The trendy sunglass company Warby Parker utilizes AR in its shopping experience, too. Its app helps people shop for glasses without setting foot in a store. You simply scan your face and “try on” different glasses to see how they look on you.

The makeup giant L’Oréal has developed something similar. Its smart mirrors let you “try on” cosmetics by simply looking into your phone. If you aren’t happy with your look, you can simply hit “undo.” No need to apply makeup remover.

Realtors will soon use AR to let buyers tour a home without ever setting foot in it. The “open house” as we know it will change forever.

Doctors will use AR to “see under your skin.” It will help them better diagnose injuries and illnesses.

Of course, you’d know all this already if you’d been following my work. I’ve been pounding the table on this opportunity since January.

But, like many of today’s most exciting megatrends, coronavirus has kicked this into overdrive.

According to Statista, the AR market is poised to grow nearly ten-fold! 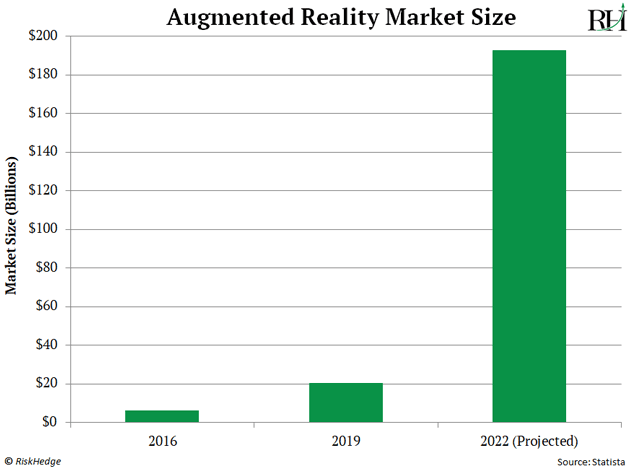 Here are my top three ways to play this megatrend…

Adobe (ADBE) pioneered photo editing with its groundbreaking Photoshop program. But the tech giant now has its sights set on AR. In fact, the company recently rolled out “Aero,” which lets anyone create and share AR experiences with the world for the first time. It’s basically photoshop for AR.

ADBE is one of my top bets to profit as AR goes mainstream. It’s one of today’s strongest stocks.

You can see that ADBE is still in a strong uptrend despite recent market turbulence. It’s also trading above its 50-day and 20-day moving averages. That tells us the stock still has momentum on its side. 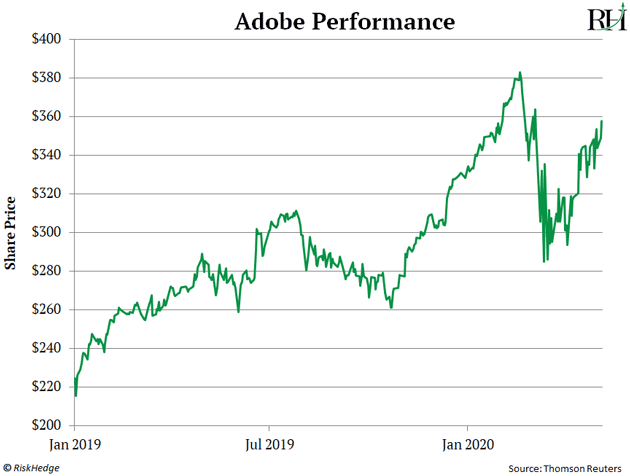 Snap Inc. (SNAP) is another one of my top AR plays.

Snap is a social media giant, and one of maybe two or three companies that’s truly bringing AR to the masses.

Snap’s massive user base of young people is a big reason for this. See, young people are trailblazers. They’re usually first to experiment with new technologies. They were the “early adopters” who first pushed social media, video games, and online dating into the mainstream.

And they’re going to do the same for AR.

Snap understands this. Like Adobe, it’s made AR a top priority. In fact,“ augmented reality” was mentioned 12 times during its latest earnings call. Snap’s CEO also called AR the “future of computing” during that same call!

Investors have gotten behind Snap’s long-term vision. As you can see below, Snap rebounded aggressively following the recent market meltdown… surging more than 120% off its lows! 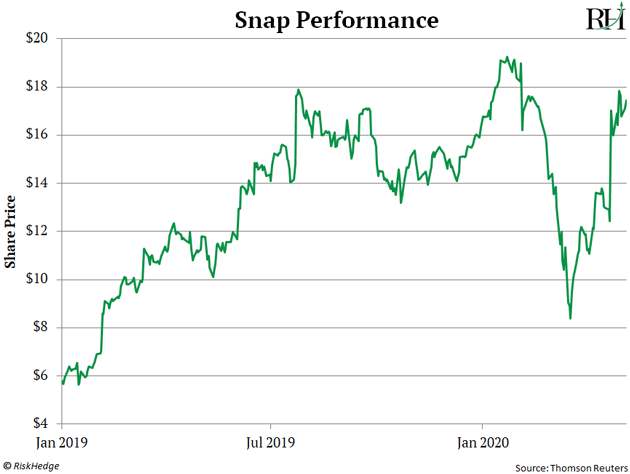 This tells us there’s a ton of demand for SNAP. I expect the stock to climb to new all-time highs in the coming months.

Lumentum makes 3D sensors for Apple (AAPL). Its technology allows the new iPhones to perform facial recognition. If you own a new iPhone, you know that this feature is now “the standard.”

In other words, Lumentum should play a key role in Apple’s AR ambitions for years to come.

And like ADBE and SNAP, LITE has performed exceptionally lately. It’s still in a strong uptrend despite the recent market meltdown. 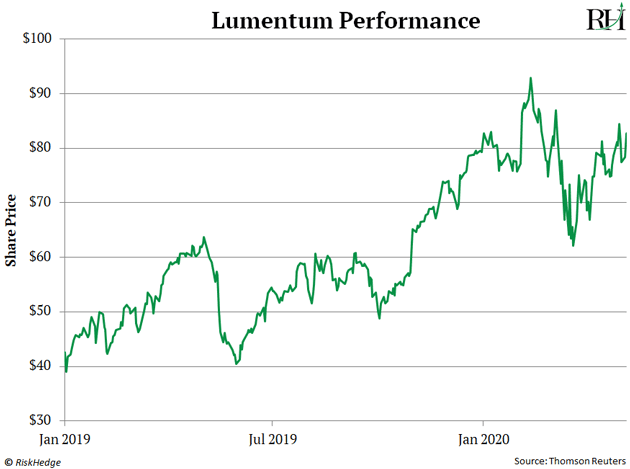 Finally, it’s worth noting that LITE is still trading above its 200-day, 50-day, and 20-day moving averages. And it never hit “oversold conditions” during the recent selloff! In other words, Lumentum never lost its upward momentum during the recent crash.

This is a sign of a true leader. And, as regular readers know, those are the only stocks I want to own in today’s environment.