The market is taking investors for a ride.

One day, stocks are tanking. The next day, they’re zooming higher.

The volatility we’re experiencing is unprecedented.

When the market is this turbulent, it can be stressful. But it doesn’t have to be…

In a minute, I’ll show you a simple way to use extreme volatility to your advantage.

This approach can make you money in any environment. But it’s especially profitable in wild markets like today.

But volatility isn’t just great for day traders. Everyday investors can also cash in on chaos.

It all comes down to buying the strongest stocks.

Unfortunately, most investors do the complete opposite. Instead of buying strong stocks, they’re buying crummy stocks because they look cheap.

This is why “bottom fishing” is so risky. You need to nail the timing. Otherwise, you risk losing a ton of money.

All you have to do is bet on the “leaders.”

Leaders stand out from the pack. They deliver the biggest gains during bull markets… often outpacing the market by two… three… or four times.

They also shine during bear markets. They either fall much less than most stocks… or buck the trend entirely. That’s right. The very best leaders surge when most stocks are plunging.

There are a few ways. But one of the simplest methods is to focus on stocks that are STILL trading above their “200-day moving averages.”

Traders like myself use it to identify longer-term trends.

In bull markets, most stocks trade above their 200-day moving averages.

But that’s not the case anymore. The S&P 500 has plummeted 35% over the past six weeks.

More than 90% of stocks are now trading below their 200-day moving averages! Those stocks have broken their uptrends, and it will take time for them to repair the damage.

This is why you should focus on the other 10% of stocks.

AMD is one of the world’s biggest semiconductor makers. Its devices go in everything from laptops to video game consoles.

AMD was one of the top-performing stocks before everything came crashing down. It surged 212% from the start of 2019 to this February. During that stretch, it outpaced the S&P 500 by more than six-fold! 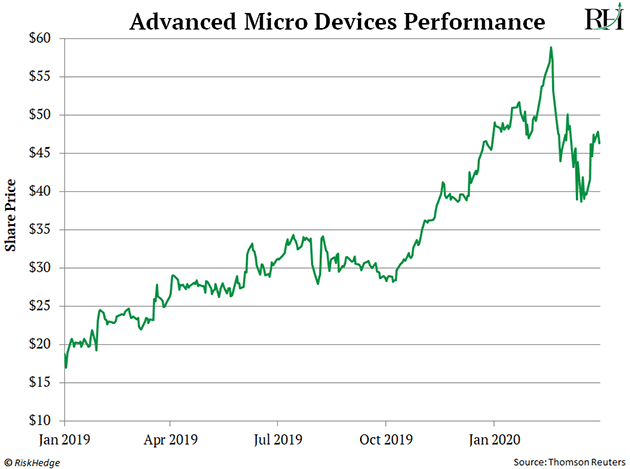 AMD has also held up incredibly well lately. Unlike most stocks, it didn’t break down. Its still trading above its 200-day moving average like a champ.

Regular readers should recognize the name.

Enphase is one of my top “green energy” stocks. The company is a solar energy pioneer with the off-the-chars fundamentals.

Enphase’s sales have surged 118% over the last two years. The company also wildly profitable. Its earnings have grown more than 100%+ over the last five quarters.

But I didn’t buy Enphase last week for those reasons. I bought it because, like AMD, it’s a leader.

Enphase surged 1,100% since the start of 2019. It was easily one of the top stocks during that stretch. 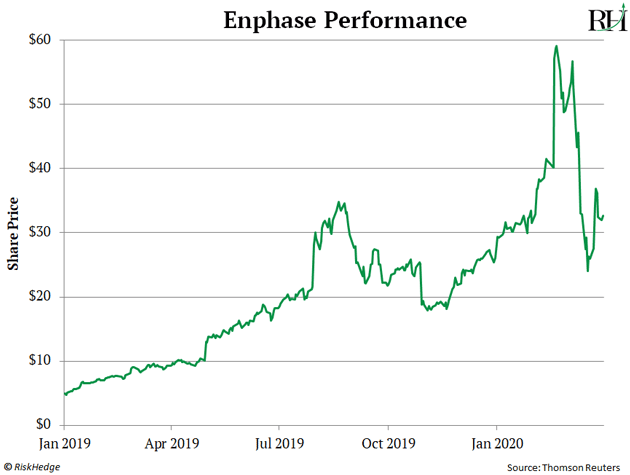 Enphase has also held up well lately. It’s up more than 25% on the year, despite the recent bloodbath. And it’s holding its 200-day moving average.

So, I decided to speculate on Enphase on two weeks ago.

A week later, ENPH was trading 60% higher. That’s a massive gain. But leaders are handing out gains like this left and right…

Netflix (NFLX) – Netflix is the worldwide leader in streaming.

As I told you last week, people can’t get enough of Netflix right now.

Downloads in Italy and Hong Kong—two areas hit hard by the coronavirus—have doubled in recent weeks. In Spain, downloads have surged 50% since the beginning of February… while Korea has seen a 33% spike in downloads.

In Europe, people are watching so much Netflix that the entire continent is “facing unprecedented strain on their networks.”

Netflix’s stock has also held up extremely well lately. It’s trading above its 200-day moving average, and is just 5% off its highs. That’s far better than the S&P 500, which is nearly 24% of its highs.

If you read the February 8 RiskHedge Roundup, you know GSX is one of my top “stay at home” stocks. It’s also one of today’s strongest stocks, period.

It’s also trading well above its 200-day moving average, and it’s within 9% of its record highs. These are telltale signs of leader.

Like Zoom Video (ZM), its business benefits when more people are working from home. So, it shouldn’t surprise you that Atlassian’s doing well today.

Atlassian is trading well above 200-day moving average, and is just 11% off its highs. Again, these are signs of a strong stock.