Why you’ll never get another stimulus check

As you likely know, the US government recently handed out “coronavirus checks.”

But it is the first time Americans didn’t need a bank account to get the cash.

On April 10, PayPal became the first “internet bank” authorized by the US Government to issue stimulus checks.

Folks didn’t have to wait for a check to arrive in their mailbox… or talk to a bank teller to get the money.

Instead, Uncle Sam simply funneled billions of dollars to Americans through PayPal’s “app.”

As I’ll show you today, the disruption of banks is reaching a tipping point.

In fact, have you seen a chart of bank stocks lately? 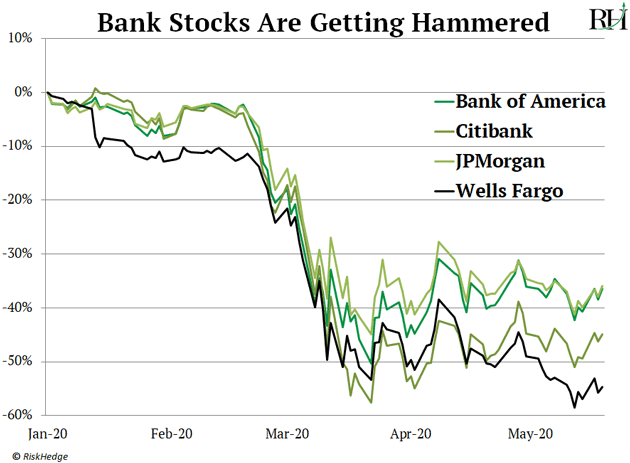 These are the largest, most powerful financial institutions in America!

But they’re ALL crumbling to new multi-year lows. Bank of America is now selling at the same price it was in 1996!

For pretty much all of history, traditional banks have held a monopoly on all things money.

Need a place to deposit your weekly paycheck? Better get a bank account.

Want to borrow money? Go talk to a banker.

But now, for the first time ever, their stranglehold on money is slipping away.

You used to need a regular bank account to cash a government stimulus check... receive social security... or pay taxes.

Now you can use PayPal’s “app” to do all three.

And get this… banks don’t even dominate money lending anymore.

Last year, more than half of all mortgages were issued by “non-bank” lenders.

Quicken Loans is both America’s largest mortgage lender and the fastest-growing firm in the industry. It doesn’t operate branches. Instead, it evaluates borrowers using online forms. And it connects with its customers over the internet and by phone.

Regular RiskHedge readers know coronavirus is one of the most disruptive forces we’ve ever seen.

On May 1, PayPal (PYPL) processed more money than on any single day in its 22-year history. In short, Americans are spending more money online than ever before. And millions are choosing to checkout with PayPal.

And PayPal’s not the only company benefiting from this disruption…

Have you ever used Square’s (SQ) Cash App? It’s a smartphone app that allows you to instantly send and receive money, for free. It essentially replaces the need for a traditional bank account.

Square’s management announced over 26 million Americans are now using it at least once a month.

As you likely know, nobody wants to handle “filthy” cash right now—instead everyone is using their card to pay for things. Combined, Visa and Mastercard’s networks processed a record $4 trillion in the past three months!

These disruptors are the big winners from coronavirus. And their stocks are at, or near, all-time highs:

JPMorgan Chase’s (JPM) profits plunged 69% in the first three months of 2020. And it set aside $8 billion to cover losses on borrowers that will likely default.

Their big brand names are plastered across thousands of fancy bank branches. And we always hear about banker’s sky-high bonuses on TV…

When most folks read about disruptors like PayPal, they imagine internet “start-ups” stealing only a tiny slice of these big banks’ businesses.

But get this… some well-known disruptors are now more valuable than the most powerful banks in the world, as you can see:

When we discussed the disruption of banks last May, the five largest US banks were worth a combined $1.1 trillion…

Over the past year, they’ve shed $350 billion in value.

This wealth didn’t vanish. It changed hands from the disrupted… to the disruptors.

If I had told you 10 years ago that disruptors like PayPal would be worth more than big important banks like Wells Fargo or Citibank, you would have laughed at me.

But it’s easy to see how the tables have turned. Over the past decade, disruptors have picked off businesses that banks used to dominate one-by-one.

And robo-advisors that give you automated, financial planning services are stealing banks lucrative wealth management business.

In short, disruptors have seized banks’ most profitable businesses… and left them with the scraps.

Banks will continue losing to innovators like PayPal, Visa, and Mastercard. And this guarantees hundreds of billions of dollars in stock market wealth will keep shifting away from “old finance.”

Now is the time to own the disruptors, and bet against the disrupted.

Lots of great feedback on last week’s essay: “Flying Robots Will Soon Deliver Your Morning Coffee”… Here’s what your fellow readers are saying…

(And be sure to send in any questions, comments, or ideas you have for the RiskHedge Report at Stephen@riskhedge.com. I enjoy reading them all.)

I’m a new subscriber and am enjoying your articles so far! I just read your Flying Robots article and it definitely seems like a legit disruptor. I think ice cream and coffee could be a ways off (unless we are all stuck at home in perpetuity), but with the FAA opening that door, I think you nailed it with Amazon, WalMart, UPS/FedEx, CVS, Walgreens, etc.

I wonder how this idea plays in with a company like Mercury Systems (MRCY) or other drone companies as that market should explode if the skies start to resemble that Audi commercial from a couple years ago!

Thanks for the insight. I’m looking forward to many years of disruptor advice! —Al

I'm all in believing drone delivery is coming fast. Not only in light drones but in a heavy drone delivery to remote communities and construction sites, mines, oil sites etc.—Ray

Hi, Stephen—I'm sure you're right about drones possibly becoming THE method of delivery in the years ahead. But rules need to be worked out first by, I suppose, the FAA. I mean, we can't have tens of thousands of drones flooding the sky going in every imaginable direction delivering drugs, pizzas, Amazon packages, etc. and crashing into each other.  Just my thoughts.—Ken

Stephen, about the drones… The idea of having things delivered to your home by drones is great. I believe it could be a good idea for emergency goods, like medicines, etc. However, I do not see everyone delivering by drones. How do you manage deliveries to people living in apartment blocks or high rises? Can you imagine the chaos you will have above the city with drones flying all around?

How do you avoid collisions among them? How can the police fly helicopters safely? If and when you have flying taxis, the problem just gets worse. I do not think we are technically prepared to manage this traffic. Also, I personally would hate to see this happening. It is bad enough as it is without having to see a constant movement of drones on top of your head.—Roger

I see this situation being limited in distance in the near future. However, I feel in the future, we’ll see extended delivery areas for soft goods and non-perishable items.—Joseph

I live in a San Francisco multi-unit condo. I can’t fathom the logistics of drone delivery. Would I have wait outside? Does the drone land in front of me based on locating my iPhone?—Robert