How many credit cards do you have?

If you’re like the average American, you carry four in your wallet.

And the mailman likely slides a “PRE APPROVED!!” offer for a new one into your mailbox at least once a week.

Chances are your credit cards are from different banks. Maybe you’ve got the Venture Card from Capital One for when you travel. Or the Chase Freedom card, which gives lots of “cash back.” Or the JetBlue Card from Barclays, which racks up “miles” you can spend on JetBlue flights.

You probably have at least one ATM card, too. Maybe from Bank of America... Wells Fargo... or a smaller bank in your town.

If you dumped out your wallet on the table and laid all your cards side by side, you’d notice something odd.

While all the cards are from different banks—and they all have their own special privileges, prestigious names, and color schemes—most have one thing in common:

“Visa” or “MasterCard” stamped on the bottom right.

It hardly matters what bank you use. At the end of the day, your card likely needs Visa or Mastercard’s payment network to function.

Over 80 million stores accept Visa or Mastercard. With one of their cards in your wallet, you can buy stuff anywhere in the world.

I lived in Argentina a couple of years ago and spent most of my time in a tiny rural town. The roads were dusty and most locals rode bicycles to get around. Yet I didn’t take out cash once. And I didn’t have to worry about converting my US dollars to Argentinian pesos.

Almost every store and restaurant in that dusty little town accepted my Visa card, no questions asked.

Visa and Mastercard have effectively created a universally accepted money—a “global currency.” $13 trillion flowed through their networks last year. They make money by taking a small cut of each transaction, like a tollbooth on a highway.

Both Visa and Mastercard are minting record profits, and their stocks have handed investors tremendous gains: 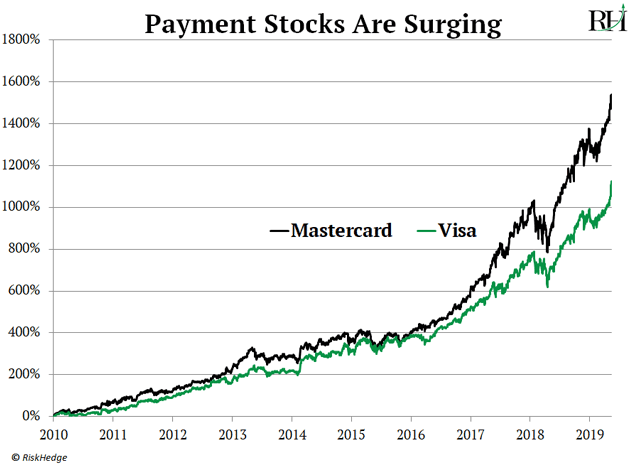 Here’s why this is important for you...

For many decades, we’ve had to deal with banks to move money.

If you wanted to cash your paycheck… wire money... or get a credit card… you often had to talk to a banker.

These days, you can do all these things without ever stepping foot inside a bank. You can even get a mortgage without ever talking to a human banker!

Sending money no longer means writing a check and waiting three days for it to clear. Now you can send and receive money instantly with PayPal’s (PYPL) Venmo. Roughly 50 million Americans use Venmo every month. You can even pay your taxes with PayPal.

Have you ever used Square’s (SQ) little white box that swipes credit cards? It plugs into your smartphone to turn it into a cash register. Over two million small businesses use it to accept cards instead of cash.

And getting a credit card no longer requires filling out piles of paperwork and answering a banker’s questions. Smartphone giant Apple (AAPL) made a splash when it debuted its shiny new titanium credit card last August.

As I said, these disruptors will end banks as we know them. Nobody cares if banks have fancy lobbies with marble floors these days. Most Americans just want a fast and convenient way to manage their money.

I haven’t stepped foot in a bank in years. And foot traffic into branches has fallen close to 50% in the past decade.

Many folks assume “old” money companies like Visa and Mastercard are in trouble too.

What few people realize is ALL the "money disruptors” I just mentioned are plugged into Visa and Mastercard’s networks.

Apple designed its titanium card to resemble its sleek products. But did you know it runs on Mastercard’s network? You can see the Mastercard logo etched into it here: 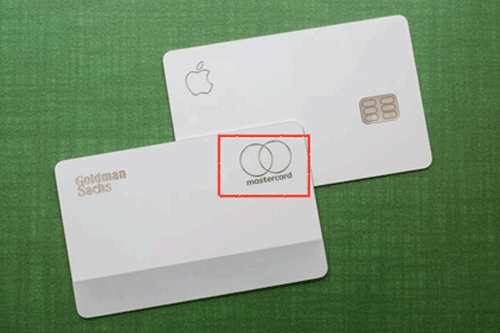 And credit cards from PayPal… Square… and Stripe all have Visa or Mastercard logos:

These disruptors aren’t ripping out the pipes of our financial system and trying to cut out Visa and Mastercard. Instead, they’re partnering with them… sending even more money flowing through their networks.

Remember, each time you pay with a card, Visa and Mastercard collect a small fee.

In fact, even when you pay with your phone, these giants make money. Apple Pay… Google Pay… and Amazon Pay... are simply “apps” built on Visa and Mastercard networks!

How we move money around and pay for things has changed for good.

Yet these changes have only cemented Visa and Mastercard’s dominance.

They’ve built payment networks nobody can match. More than 30,000 banks use their credit cards. There are 3.4 billion Visa cards alone in circulation!

And now partnerships with PayPal, Square, and others are injecting a new wave of growth into Visa and Mastercard.

They are two of the most consistently impressive businesses I’ve ever analyzed.

If you’re investing for the long haul, you could do a lot worse than owning these two undisruptible tollbooth stocks.

Do you agree with us… or do you think these companies could eventually be disrupted by bitcoin and other cryptocurrencies? Tell me at Stephen@riskhedge.com.

Thanks for all the nice notes you’ve sent me recently. Here are a few:

Stephen, I’ve never had the time to find the disruptors and determine when to get in, and when to get out. I am so thankful that I found you and your team. Keep the buys and sells coming.

Great article on Chipotle and food delivery. I appreciate the thesis that the money is not in the home food delivery companies but the Chipotle’s of the world. A few years ago I bought Grub Hub (GRUB) when it was running from the $40's to over $100. Being a trader I sold long before it broke down. Keep up the great work.

Stephen, your newsletter has been an eye opener. I’ve been in the market for over a decade now and it’s always appealing to get different perspectives from better prepared and knowledgeable advisors.

Thank you very much for the time you have taken, to shed light among your many subscribers for the do´s and don’ts in this ever changing economy. You are one to keep an eye on.

Stephen, thank you for the RiskHedge newsletter, I have been a subscriber for a little over a year and regularly enjoy the insights offered. I’ve made successful investments in Alteryx and Disney.

I was also relieved – after waiting on the sidelines due to absurd valuations in the cannabis stock market despite growth prospects for the product itself – to read your perspective and finally understand that hemp is just a crop facing over-competition where long-term profits are just unlikely to surpass multiples on agricultural stocks.

A Death Spiral Has Begun…
Trump Opened the 5G Money Spigots… Are You Ready?
These Stocks Are a “No Brainer”