Coronavirus has turned America upside down.

Bars and restaurants across the country have shut down… Major sporting leagues like the National Basketball Association (NBA) have stopped playing games… Malls, movie theaters, and theme parks have also closed their doors until further notice.

In some cities, officials are telling everyone to stay home.

We’re truly in uncharted territory. And fears continue to rattle the markets.

But it’s my job to help you see the big picture… and identify moneymaking opportunities that few investors see. That’s what this essay’s all about.

In a minute, I’ll explain how the coronavirus could soon light a fire under one of my favorite groups of stocks.

And it’s all because people are spending more time home and online than ever.

Netflix is, of course, the worldwide leader in streaming. And right now, people can’t enough of it.

Downloads in Italy and Hong Kong – two areas hit hard by Coronavirus - have doubled in recent weeks. In Spain, downloads have surged 50% since the beginning of February… while Korea has seen a 33% spike in downloads.

In Europe, people are watching so much Netflix that the entire continent is “facing unprecedented strain on their networks.”

Netflix is working with regulators to fix this. It’s promised to reduce the quality of its streaming content by 25%! And it plans to do the same in India.

This is unprecedented. But Netflix doesn’t have much choice.

Global internet networks are being pushed to the brink because so many people are binging Netflix. Of course, that’s not the only way folks are killing time.

We know this because Google (GOOG)—which owns YouTube—also reduced the quality of its streams in Europe to prevent the internet from buckling under the pressure.

People are also using the internet to stay in touch with friends and family.

A lot of people are also playing video games right now. According to Verizon (VZ), online gaming traffic on its network has spiked 70% in recent weeks!

And a lot of those folks are using video to stay in touch with coworkers.

In fact, Zoom Video (ZM)—the world leader in teleconferencing—had 600,000 new downloads last Sunday! That’s the most downloads in a single day for the company.

That’s sparked a monster rally in its stock. You can see that Zoom’s surged 132% since the start of the year. It’s easily one of the top-performing stocks this year. 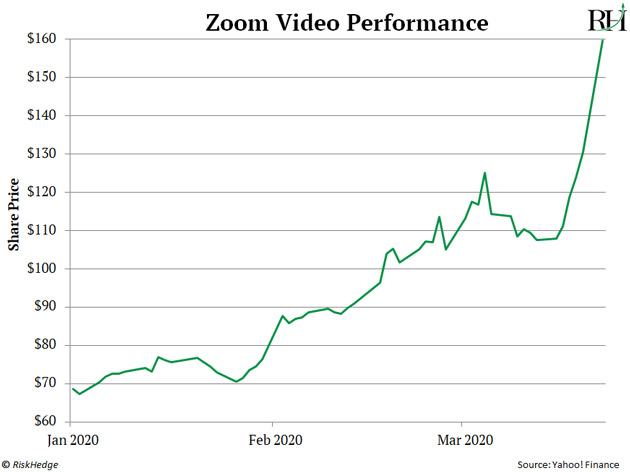 Patient visits for Teladoc (TDOC)—the world leader in “telemedicine”—surged 50% in a week due to coronavirus.

Telemedicine lets you speak with a doctor over the phone or video call. It’s quicker, cheaper, and easier than going to the doctor’s office. More importantly, it lets people consult with their doctor without being around other sick people.

Like Zoom, Teladoc’s stock has defied gravity recently. It’s surged 100% since the start of the year, and 112% since I encouraged readers to buy it in December. 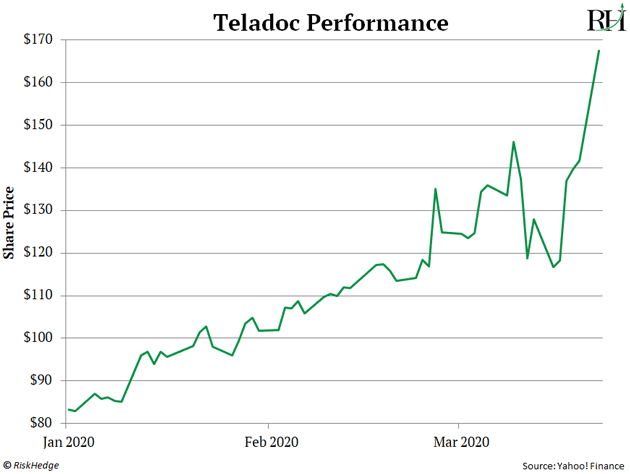 This is all great for people stuck at home right now. It means they can continue to work and live healthy lives during this madness.

But you should understand something…

It uses massive amounts of bandwidth and data.

Netflix alone accounts for just under 12% of all data delivered from internet traffic. YouTube also accounts for another 12%.

All told, video streaming accounts for a whopping 60% of all data delivered from internet providers to everyday people!

This is why Vodafone (VOD)—a major telecom provider—is seeing a 50% spike in internet usage across its network.

We’re now at the point where some are wondering if the internet will break. Check out this recent headline from The New York Times.

A data center is basically a warehouse packed full of servers. In short, they’re the central nervous system of the digital world.

They collect, store, process, and distribute large amounts of data around the clock.

When you watch a movie on Netflix, it’s processed in one of these facilities.

Or when you use Teladoc to video call your physician from home.

And they’re busier and more important than ever in the “stay at home” world we find ourselves in today.

According to Bank of America (BAC), "There's no evidence of correlation between GDP growth and data center leasing activity.” (GDP stands for gross domestic product, which measures economic output.)

This shouldn’t come as a surprise. We live in a digital world…that’s becoming more connected by the day.

And I don’t just say that because of coronavirus.

As I explained in February, 90% of all data ever created was generated in the last two years!

That’s a staggering statistic. But data consumption will only keep growing exponentially. In fact, Intel’s CEO believes humans and machines will create 10X more data over the next five years!

This is great news for companies that own and operate data centers. Their facilities will stay in demand, even the U.S. or global economy slows down.

Digital Realty (DLR) and Equinix (EQIX) are the two safest ways to invest in data centers.