Why the “Amazon of Medicine” Could Easily Double

Did you see the crazy Thanksgiving shopping numbers?

The next day, Americans shelled out $7.4 billion on “Black Friday” deals.

When you think Black Friday, you probably think eager shoppers waking up at 5 am to stampede into malls.

But things were different this year. Malls were a little less crowded... lines weren’t quite as long... because far more shoppers stayed home to buy the best deals on the internet.

And that’s before you even consider yesterday’s “Cyber Monday” bonanza. According to Adobe, Americans spent $9.4 billion yesterday. That’s a 19% spike from last year.

Yesterday was the biggest online shopping day ever!

The companies responsible for this change have made investors rich beyond imagination.

Everyone knows the story of Amazon (AMZN). Shares of the retail giant have jumped 30-fold since 2009. Then there’s Shopify (SHOP), which helps businesses easily set up online marketplaces. Its stock has surged more than 1,200% since it went public just four years ago.

Etsy (ETSY)—another online shopping company—has climbed 427% since the start of 2016.

Plenty of traditional retailers have gotten in on the internet shopping boom, too. Take Walmart (WMT), the world’s largest “brick-and-mortar” retailer.

Walmart made online shopping a top priority in 2016 when it bought online retailer Jet.com for $3.3 billion. Walmart’s online sales have jumped 78% since, while its stock has leapt 85%.

I’m telling you this because another enormous industry is quietly being changed forever... and few investors have noticed yet.

Teladoc is the world’s leading “telemedicine” company. Telemedicine involves speaking with a doctor over the phone or videocall.

Say you’re not feeling well. But you don’t know whether you have a simple cold or something more serious, like the flu.

How many times have you had this conversation in your head?

“Should I bother going to the doctor? I feel pretty terrible, but I really don’t have 3 hours to carve out of my day to drive to the doctor’s office and wait around, only to be told I have a cold. Besides, it’s probably nothing. But what if it’s something? What if I’m contagious? What if I need antibiotics...?

With Teladoc, the choice is easy because it makes talking to a real doctor quicker, cheaper, and easier than ever before.

You simply log into Teladoc’s app, enter your symptoms, and request an appointment.

If you’re sick, she can write you a prescription or recommend you see a specialist.

If it’s just a cold, you can sleep easier knowing you’ve spoken with a medical professional.

Teladoc really is an incredible service. The last thing many people want to do when they’re sick is leave the house. Plus, a lot of folks can’t afford to miss work for something minor like a cold.

Specialist Teladoc visits—like speaking with a dermatologist about a skin condition—start around $75.

According to a study by Humana (HUM), the average cost of seeing a doctor in person is about $114.

For emergency visits, the net savings from telemedicine is over $1,500... and according to the healthcare company Premier (PINC), one-third of all emergency room visits are unnecessary.

Teladoc visits are also covered by most health plans. In fact, health insurance companies LOVE telemedicine, because it can save them billions of dollars.

Teladoc’s sales have grown 67% per year since 2016. Its stock has tripled since its initial public offering (IPO)… and 808% since the stock bottomed out in May 2016. 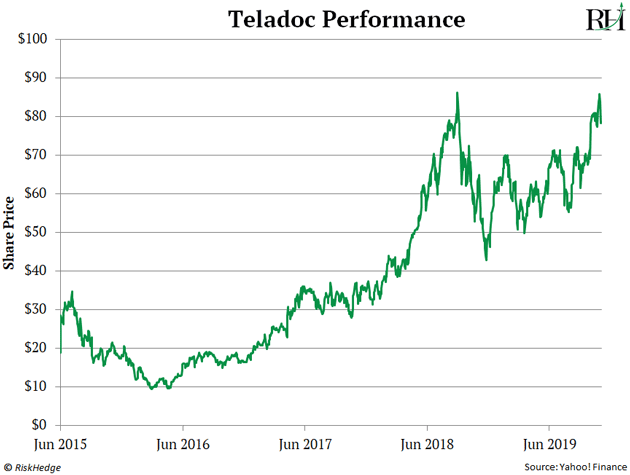 That’s a tremendous run. But Teladoc is likely just getting started.

According to a recent Harris poll, only about 8% of Americans have tried telemedicine.

This will absolutely change. Within just a few years, visiting the doctor for minor illnesses will be a thing of the past.

This bodes well for Teladoc, the clear leader in telemedicine. It’s partnered with over 12,000 health plans, employers, hospitals, and health systems. It works with more than 50,000 board-certified doctors.

Teladoc has also partnered with CVS Health (CVS). Its platform is available 24/7 on CVS’s mHealth app.

The company recently inked a deal with UnitedHealth Group (UNH)—America’s largest health insurer—to offer telehealth as a benefit in some of its plans. This deal added 15 million people to Teladoc’s platform.

It now has 35 million paying customers.

That’s more than 10 times its current user base.

The market doesn’t seem to realize Teladoc’s massive potential. If it did, the company would be worth a lot more than $6 billion. The whole US healthcare market, for comparison, is worth $3.5 trillion.

If you’re interested in buying Teladoc stock, don’t wait too long. Teladoc is flirting with new all-time highs, as you can see here… 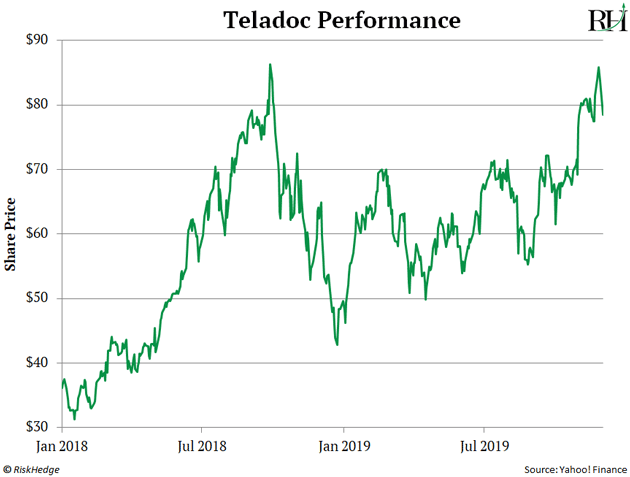 A “breakout” here would likely lead to much higher prices. And I believe it’s only a matter of time before that happens.

In October, the Centers for Medicare and Medicaid Services (CMS) extended Medicare telehealth care access to people with chronic conditions. This will allow private Medicare Advantage plans to access virtual doctors in their basic benefit packages. It takes effect on January 1, 2020.

This is huge. Just 0.25% of Medicare recipients have used telemedicine. So, a massive market is opening for Teladoc.

Just like Amazon made shopping easier, cheaper, and faster...

Just like Netflix made watching movies easier, cheaper, and faster...

Teladoc will forever change healthcare by making visiting a doctor easier, cheaper, and faster than ever before.

I wouldn’t be surprised if Teladoc’s share price doubles, at least, over the next 18 months.

Have you used telemedicine before? If so, how was your experience? Tell me at justin@riskhedge.com.