The only thing more lucrative than a “disruptor”

** Buffett just did this for the first time in 55 years…
** That doesn’t mean you should…
** Instead, look for these “less obvious” new stocks

Even superinvestor Warren Buffett got swept up in the hype…

So much so he just did something for the first time in 55 years!

He bought an IPO… and not just any IPO…

He bought Snowflake (SNOW), one of the biggest names in 2020… the revolutionary cloud computing company that helps companies better access and analyze their data.

Buffett is the last guy you’d expect to be buying hyped IPOs.

He says so himself. Last year, when asked if he’d buy the much-hyped Uber IPO, he said: “In 54 years, I don’t think Berkshire has ever bought a new issue (IPO).”

In year 55, Berkshire was at the front of the line to buy Snowflake the day it started trading.

As you can see, the stock shot up like a rocket on opening day: 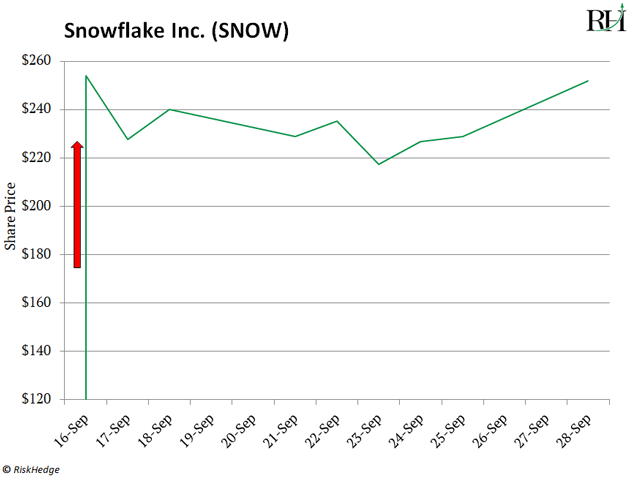 Now, with all the hype surrounding Snowflake, you might be tempted to buy some shares…

Justin’s studied the returns of over 8,000 IPOs. He says there’s a clear “love/hate” pattern to IPOs that should be the #1 driver of your decision whether to buy one:

Last year, Uber (UBER) and Lyft (LYFT) disappointed investors. Both stocks crashed 35%+ during their first six months of trading. Even Facebook’s (FB) IPO was a flop. It plunged 54% in its first five months as a publicly traded company before ultimately bottoming out.

This happens all the time in the IPO market. When there’s a ton of hype around an IPO, that enthusiasm gets “priced in.” And most of the upside is captured before retail investors like us even have a chance to buy it.

Snowflake was easily the most hyped IPO of 2020, and so it was a no-brainer decision to avoid it. Folks who see the mainstream media shouting about its triple-digit gains may think they missed out on big profits by avoiding Snowflake.

But that’s not how IPOs work. Here’s Justin:

Snowflake’s shares were originally priced between $75 and $85. A few days later, while the company was still private, Snowflake bumped its price range up to $120. That’s 50% higher than where it was originally priced!

As if that weren’t crazy enough, Snowflake opened its IPO day at over $250 per share. That’s important because it’s the first price regular investors could have bought it at. That’s 213% above the $80 range where it was initially priced!

The average investor saw none of those gains. It’s inevitable with hyped-up IPOs: In the initial days or weeks of trading, regular investors get the short end of the stick.

Justin loves Snowflake’s business, but he has no doubt it will go “on sale” in the coming months. So if you’re interested in owning it, hold off for now: You’ll get a better opportunity to buy in soon.

And keep in mind: This is all part of the love/hate pattern that plays out over and over again in IPOs. When IPOs are red-hot, front-page news like they are today, you’re better off avoiding most of them.

On the other hand... Justin’s IPO Insider subscribers are enjoying big gains from IPOs they got into earlier this year. One of his picks is up 375% since February. Another has surged 269% since April.

Those were the darkest days of coronavirus. Markets were down big, people were scared, and investors wanted nothing to do with IPOs. That’s exactly the kind of environment that produces a lot of profitable IPOs.

It takes a contrarian attitude to buy IPOs in times like that. But as Justin’s results show, doing so is one of the surest ways to bank triple-digit gains. To learn all about Justin’s approach to trading IPOs—go here.

Moving on, I’d like to open your eyes to a different kind of “new.” One that has nothing to do with IPOs…

You see, when most investors hear “new,” they immediately think newly public companies like Snowflake.

But there’s another kind of “new” company every investor needs to be aware of today.

And while Justin is an IPO specialist, he alerted RiskHedge readers to this unique non-IPO stock late last year…

Back in December, Justin wrote a RiskHedge Report titled: Why the “Amazon of Medicine” Could Easily Double.

He was right on the money. In fact, the stock he was talking about has more than doubled since his essay. It’s catapulted 155%, and is one of this year’s top-performing stocks.

The stock is Teladoc Health (TDOC), a “telehealth” pioneer. Take a look: 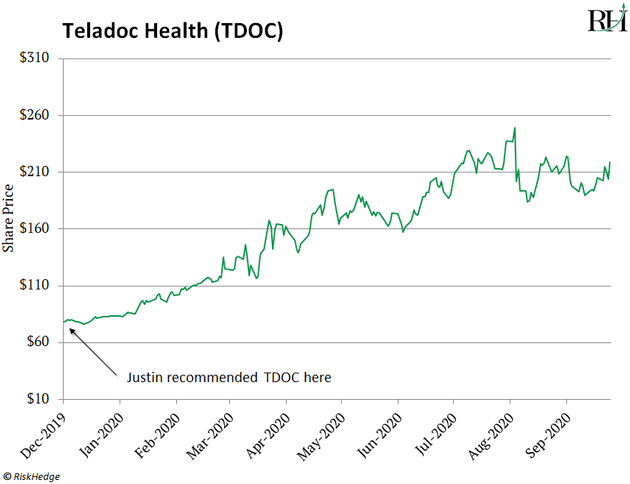 Teladoc is not an IPO. But it is trailblazing an entirely NEW sector: telehealth.

If you’ve been following along, you know chief analyst Stephen McBride says there’s only one thing more lucrative than a stock that disrupts a large industry...

And that’s a stock that creates an entirely new industry from scratch.

Teladoc soared because it’s doing something completely new. A few years ago, seeing a doctor on the computer wasn’t just “weird.” It didn’t exist.

Most people chalk Teladoc’s big gain up to coronavirus. That’s the easy answer, but it’s incomplete.

It’s the newness that gives these kinds of stocks a wide open, blue sky of opportunity to grow fast.

Teladoc was one of two telehealth companies at the time. Livongo (LVGO) was the other. Both went ballistic and handed out big gains because they were doing something no one else was.

Stephen will have more to say about this on Thursday…

Have you bought any of these “less obvious” new stocks recently? Let me know how it’s going at chrisreilly@riskhedge.com.