My worst call ever

Before the coronavirus outbreak, I doubted telehealth had much potential. I remember sitting outside a café with our publisher and telling him it was a bust.

No way folks will go for it.

Right now, millions of Americans are firing up their laptops and “visiting” doctors virtually.

In fact, more than 55 million folks now pay for a telehealth subscription. 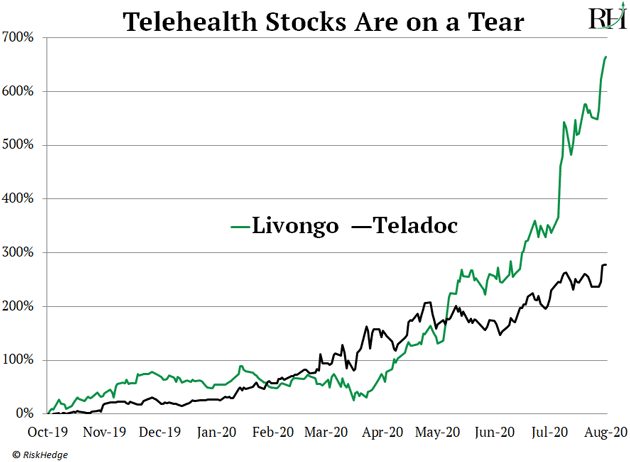 And here’s what I’ve come to realize…

Of course, it shined a spotlight on these stocks. But above all else, telehealth stocks are soaring because they’re doing something totally NEW.

A few years ago, seeing a doctor on the computer wasn’t just “weird.” It was unheard of!

No doctor was willing to write you a prescription over Skype.

Then Teladoc came along and created a marketplace for online medicine. Now a guy in Wyoming can go “see” world-class physicians at the Cleveland Clinic from his living room.

As a RiskHedge reader, you know the moneymaking power of “disruptor” stocks.

There’s only one thing more lucrative than a stock that disrupts a large industry...

And that’s a stock that creates an entirely new industry from scratch.

Thiel is famous for being “first” to several groundbreaking disruptions.

He founded money disruptor PayPal (PYPL) in the ‘90s. He was also the first outside investor in Facebook (FB). And he backed Airbnb when it was a little-known startup.

A few years back, Thiel wrote an article for the Wall Street Journal titled “Competition Is for Losers.” He pointed out that many of the greatest companies share one thing in common: They’re so far ahead of the game, they have no competitors.

With nothing standing in their way, they have “blue sky” to grow much, much faster than any “regular” business could.

With a multi-year head start and zero competitors... huge profits are theirs for the taking.

Remember, seeing your doctor over video chat on the computer wasn’t a thing people did. Teladoc and Livongo essentially created the telehealth industry from scratch.

Teladoc is by far the largest remote medicine platform. Yet it only hosted 2.6 million doctor’s visits in 2018 for patients around the world. That’s a tiny sliver of the 900 million physician visits each year in the US alone.

But then the coronavirus hit the fast-forward button on telehealth. In just the last three months, Teladoc hosted 2.8 million remote visits. That’s more than all of 2018!

And get this... it now has 51 million paying members in the US alone. Telehealth is like the new cable TV!

With no real competitors, Teladoc and Livongo grabbed all the profits for themselves. And now, they’re joining forces… with Teladoc recently announcing that it’s buying Livongo.

The rarer something is, the more it’s worth.

Most folks understand this for things like diamonds or a Picasso painting. But it’s also true for stocks.

There are only a couple dozen companies creating new industries at any one time. So the value of these stocks typically soars.

Take electric-car pioneer Tesla (TSLA) for example. It’s the most divisive stock on Wall Street, but there’s no debating its incredible performance: 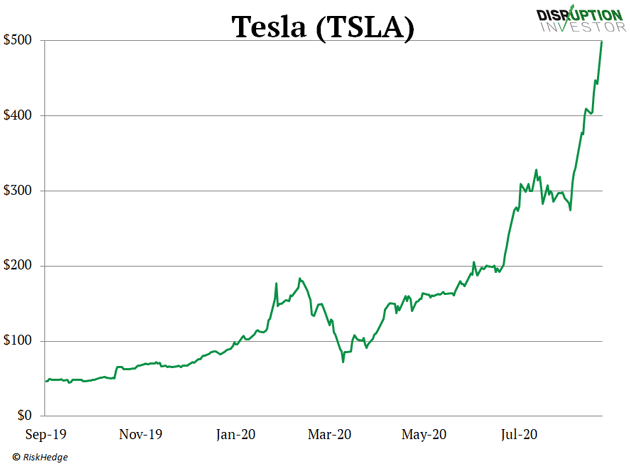 Ditto for the inventor of gaming and AI computer chips, NVIDIA (NVDA). Its stock has surged 4,000%+ in the last decade. 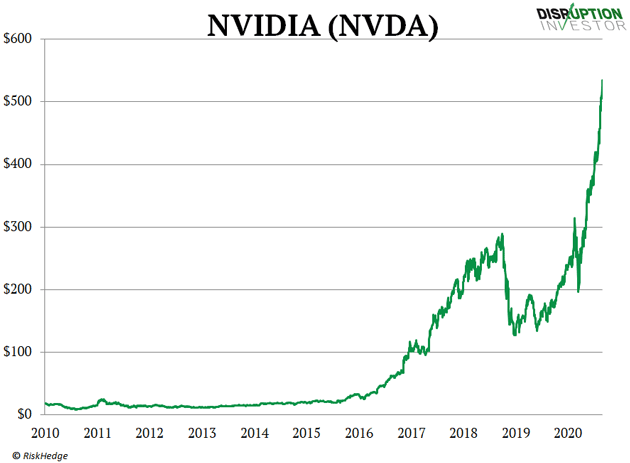 Telehealth stocks are scarce too.

There weren’t dozens of telehealth stocks to choose from. There were two. And they both minted 250%+ profits in a matter of months.

After all... a 400% gain in a matter of months isn’t something you see in ordinary stocks.

Even disruptor stocks rarely spike that fast. It takes time to disrupt entrenched players. Netflix, for example, disrupted cable... but it took a good 15 years. (Netflix was founded in 1997).

But when you find a disruptor stock that’s doing something entirely NEW... you’ve found something very special:

A stock with blue-sky potential to rise much faster than any ordinary stock could.

And they didn’t try to be the “next” great healthcare stock like Johnson & Johnson or Pfizer.

Their CEOs weren’t interested in being the “next” anything.

Instead, they were the FIRST telehealth stocks.

Most investors spend most of their time trying to find the “next” Apple or Amazon.

Instead of trying to find the “next” Apple...

In future issues, we’ll fill in that blank.

What “new” companies or sectors are you most excited to invest in? Tell me at Stephen@riskhedge.com

It sounds crazy. You may even laugh…

But the greatest disruption innovation in a generation…

Something Bill Gates calls “the next big thing to change computing”…

All boils down to this one silly picture: 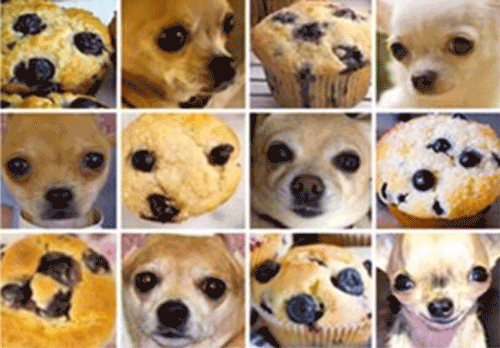 Check out the full story here. Like many of your fellow RiskHedge readers, you’ll probably be shocked to see what we uncovered…