No one’s watching sports, and that’s great for these stocks

Well, I was half-right…

Back in July, I said I’d be very surprised if NFL or college football games happened this fall.

I also shared my top stock set to “shoot through the roof if football got canceled.”

Turns out, football’s back on.

But it hardly matters…

As I’ll show you in a minute, people are not only tuning out football… they’re ditching “live sports” altogether…

And that’s provided rocket fuel for the stock I highlighted in July… and one other under-the-radar play I’ll share with you today.

As I mentioned, the NFL—which was supposed to be the “bright spot” for live sports this fall—is struggling to attract viewers. Its TV numbers fell 8% from a year ago.

Remember when people were dying for sports to come back? With the world on lockdown, you’d think ratings would be up… but it’s been the complete opposite:

And the final round of the US Open golf tournament had its worst TV audience in over 30 years!

It’s gotten so bad that ESPN just announced it’s going to terminate 500 workers… or about 10% of its workforce.

According to digital advertising company The Trade Desk (TTD), about 60% of cable subscribers say live sports is the #1 reason they still have their cable packages.

If you’ve been reading RiskHedge, you know things are looking grim for cable companies. “Streamers” like Netflix and Hulu have effectively made cable obsolete.

Last year, there were 181.2 million streaming subscribers in the US. By 2024, Statista expects 100 million more Americans to subscribe to streaming services.

America’s love for live sports was the last hope cable companies had for fending off the streamers. Now, with ratings falling off a cliff, cable could be experiencing its final death blow...

Not to mention, you can now watch live sports on streaming platforms like Hulu and YouTube TV.

In other words, the only thing that was keeping cable alive is now crumbling before our eyes.

And a select group of disruptors are set to make investors a killing.

It’s best known for making the small black boxes that plug into your TV. Its devices allow you to easily access Netflix (NFLX) and all your other favorite streaming platforms.

But it’s much more than a hardware company.

Like Microsoft (MSFT) did with computers and Apple (AAPL) with phones, Roku has revolutionized its industry by developing its own operating system, which has become the standard for today’s smart TVs.

This is why I called Roku one of my top ways to cash in on the cord-cutting megatrend in February.

If you took a position in Roku, nice call. You should be sitting on profits of around 72%. 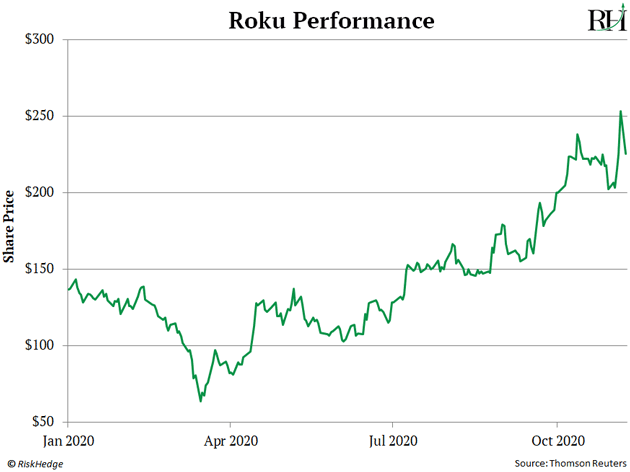 While that’s a big move, I still see more upside ahead…

Its sales soared 73% during the third quarter. And the number of hours streamed on its platform soared 54% to nearly 15 billion hours.

Roku spiked 12% on the news on Friday.

The Trade Desk (TTD) has also been a big winner from this megatrend.

The Trade Desk is a leader in “programmatic advertising,” including smart ads on streaming platforms.

So, it shouldn’t come as a surprise that The Trade Desk is also making a fortune off the death of cable.

Last quarter, its sales jumped 32%, and cord cutting was a huge reason why. Advertising spending for streaming on its platform has jumped 100% over the past year. 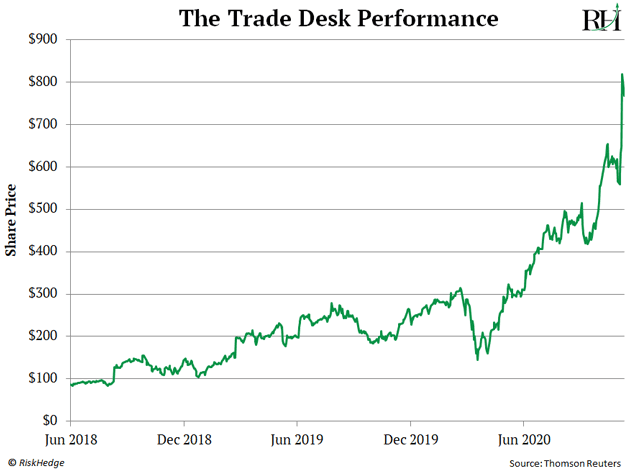 Then there’s my colleague Chris Wood’s favorite “microcap” play… a streaming ad stock that’s surged 278% since April. (Out of respect to Chris’s paying customers I can’t write the name here.)

The point is, this trend is on fire. And it’s just getting started…

On average, they pay about $100 per month for cable!

But, with interest in live sports hitting its lowest levels in decades, we expect a lot more people to abandon cable. And we’re not alone…

According to industry insiders, 25 million US households will cut ties with their cable providers over the next five years.

This spells massive opportunity for Roku and The Trade Desk. They’re excellent ways to profit off cable’s final death blow.

P.S. Roku and The Trade Desk are smart investments today. But as I’ve shown, they’ve already run up hundreds of percent. So the big, quick gains are essentially off the table.

All by using my precise method for investing in America’s most hated stocks.

Now, this strategy isn’t for everyone. But if you’re interested in learning more, I reveal all the details in this presentation.