Buy This Overlooked Stock Before Netflix Does the Unthinkable

Have you seen the new gangster movie The Irishman?

It was directed by the legendary Martin Scorsese... and was the first Netflix movie ever to debut in theaters.

If you liked Scorsese classics Goodfellas and Casino, you’ll probably love The Irishman.

But I should warn you. The movie’s a marathon. At 3.5 hours long, it took me three sittings to finish!

But it could have taken me even longer.

I believe Netflix is seriously considering adding commercials to its shows and movies.

As you surely know, Netflix has never had commercials. That’s part of what made its service so great... and so disruptive to regular TV.

Disney (DIS) has two streaming services. It took over Hulu in May. And just last month, it launched Disney+, which is already wildly popular.

NBC plans to launch its own streaming platform “Peacock” in April 2020.

It’s all-out war for your eyeballs!

It was the first time it’s lost US customers since 2011!

Netflix desperately needs to stop the bleeding. According to investment bank Needham, it will lose 10 million subscribers next year if it doesn’t lower prices.

See, NBC, Disney, and Apple aren’t just competing with Netflix; they’re undercutting Netflix. They all charge less for a subscription than Netflix does.

To compete, Netflix must cut its prices. That means it could soon do the unthinkable—introduce ads.

Netflix’s paying customers probably wouldn’t to have sit through ads. But don’t be surprised if it rolls out a “Netflix Lite” option that lets you enjoy content for free if you sit through commercials.

Maybe you’d have to watch five minutes of commercials for every half hour of content. Millions of people would go for this to save $15 a month, or $180/year.

Disney’s Hulu has ads. So does RokuTV—Roku’s (ROKU) streaming channel. Roku, by the way, is one of the hottest stocks on earth. It’s soared more than 650% since its 2017 IPO.

YouTube—Google’s (GOOGL) massively popular video platform—also features ads. If you prefer no ads, you can pay for YouTube Premium to enjoy watching without interruption.

As I said, I believe Netflix has little choice but to introduce ads. And that presents a huge opportunity…

The Trade Desk leads the way in one of the hottest advertising trends on earth: “programmatic advertising.”

Programmatic advertising “programs” the right ads to appear in front of the right people.

For example, if you often watch Scorsese gangster movies, you probably aren’t into Barbie dolls.

You’re much more likely to be into things like whiskey and golf.

Programmatic advertising will show you whiskey and golf commercials... and save the Barbie doll ads for viewers of Sesame Street.

Programmatic or “targeted” advertising is already huge on the internet. If you’re like most people, you’ve noticed that internet ads seem to be “targeted” at you these days. Targeted advertising is a gold mine because “smart” targeted ads are much more precise, effective, and profitable than “dumb” untargeted ones.

But targeted advertising is just getting started on TV. In fact, advertisers still spend $230 billion on “dumb” traditional TV ads... and just $50 billion on targeted ads.

That’s a drop in the bucket in $725 billion global advertising industry. 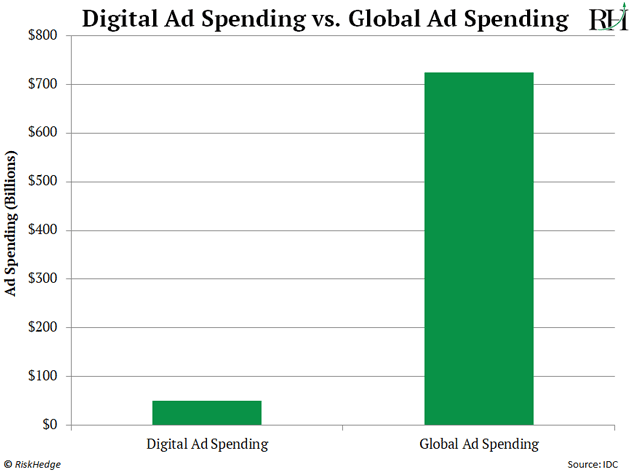 In short, The Trade Desk helps advertisers better target potential customers. Its software automatically buys and sells ad space based on who’s watching or listening. Around two-thirds of its clients are American ad agencies.

The Trade Desk is already big on the internet. It helps place ads on popular websites like Business Insider, The Wall Street Journal, Kayak.com, and LinkedIn.

It runs CTV ads for major streaming players like Apple, Roku, and Hulu. And it recently signed a deal with Amazon.

According to Green, it “is inevitable that Netflix is going to show ads…”

They’ve envied YouTube’s international reach for a very long time, where even less than two years ago, 80 percent of subscribers for Netflix were in the US…

I don’t think there’s any chance that they can catch up to YouTube, whose geographical distribution is exactly inverted, which is 80 percent comes from outside the US, unless they go ad-funded in the same way that YouTube is.”

If Netflix does do the “unthinkable,” there’s a good chance it turns to The Trade Desk to manage its ads.

Within a few years, every TV in America will be “smart.”

So, The Trade Desk isn’t just a bet on Netflix buckling under the pressure. It’s a bet on the continued rise of “streaming”—which is practically a sure thing.

The CEO of the Global Media Investment Management Group agrees…

The Trade Desk’s opportunity is massive. Programmatic advertising is growing at 20% per year, according to Magna Global. That’s five times faster than the advertising industry as a whole.

Not only that, spending on CTV advertising is growing nearly 3x faster than it was just a year ago!

That’s a big reason why The Trade Desk’s revenues jumped 42% last quarter… and surged 15-fold since 2014.

This explosive growth has lit a fire under The Trade Desk’s share price: 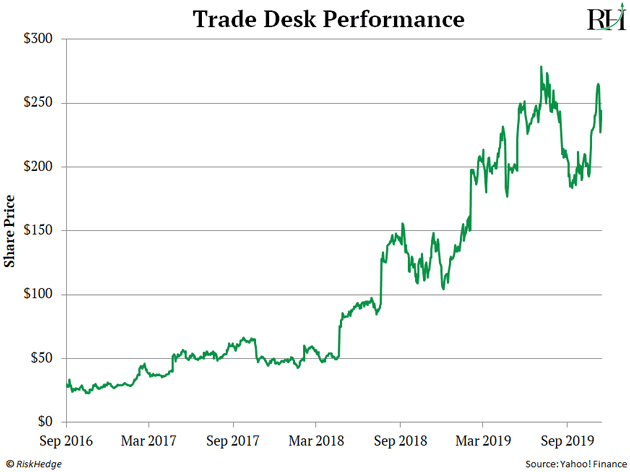 The Trade Desk’s share price has jumped 10-fold since it went public just three years ago. Longtime RiskHedge readers will recall Disruption Investor editor Stephen McBride alerting you to it last year. It has soared 172% since then.

That’s an incredible run. But The Trade Desk is likely just getting warmed up. It’s a “dark horse” to emerge as the biggest winner in the streaming war. Consider buying it for the long haul.