How to safely profit from the mother of all disruptions

What has been the most financially disruptive event of this century?

Many Americans would answer this question with a number:

It was a year filled with trauma, stress, and anxiety.

During the 2008 financial crisis, more than eight million Americans lost their homes.

Another 10 million lost their jobs.

As you know the source of all this was a collapse in US housing.

This shocked millions of folks who believed the lie that US housing was a slam-dunk, can’t-lose investment.

The fallout scarred a whole generation of Americans.

Did you see the bloodbath in US homebuilding stocks last year?

They were obliterated, having their worst year since 2008.

The US Home Construction ETF (ITB) cratered 32%, as you can see here: 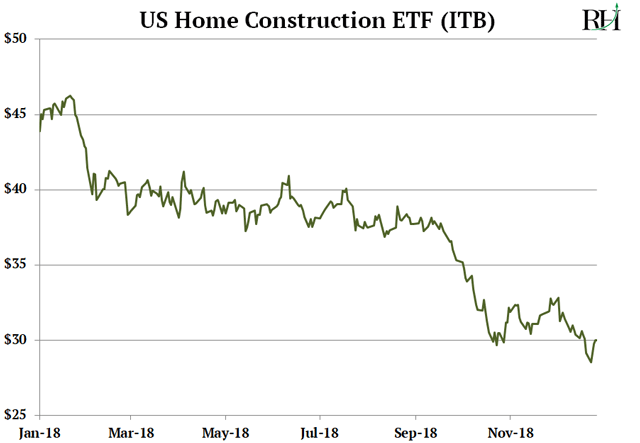 This was no run-of-the-mill correction.

In 2018, homebuilder stocks plunged as much as they had during the first 12 months of the 2008 housing collapse!

It was pure panic.

But I’m going to explain why it’s a big moneymaking opportunity for us.

We’re going to buy a company that’s earning record profits… while trading at its cheapest valuation since the depths of the housing crisis in 2009.

It’s the kind of safe but lucrative opportunity you only find in the wake of massive disruption.

Mortgage rates spiked to their highest level since 2011.

Trump’s new tax law removed some of the tax incentives for owning a home.

And after hitting a 10-year high in November 2017, home sales fell.

But one key fact trumps all this negative news:

US homes are still very affordable.

It takes three key metrics—home prices, mortgage rates, and wages—and boils them down into a single number.

This number represents how affordable housing is for the average American. 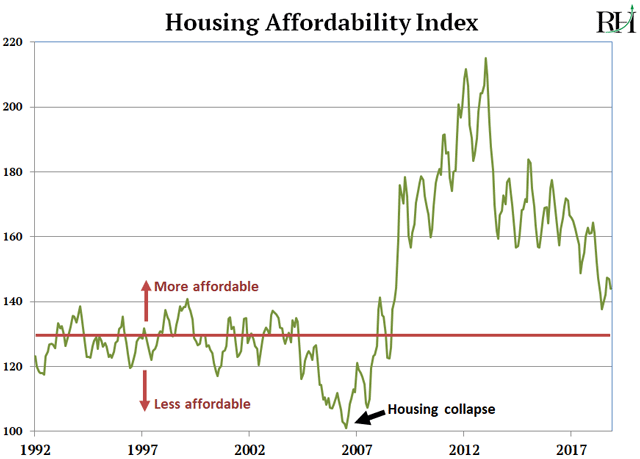 You can see affordability has dipped from generational highs in the past few years.

But it’s still well above the 50-year average as shown by the red line.

Over the past half century, the affordability index has averaged 127.

You see, every housing bust in the past 50 years has happened when affordability was below 120.

Put another way… there’s no evidence that investors should be fleeing homebuilder stocks.

The huge selloff is not justified.

Look, the 2008 housing bust was the mother of all disruptions. Investors lost their shirts in homebuilding stocks.

That’s a painful memory. I understand why investors are skittish.

But the fact is the risk of a housing bust today is virtually zero.

Yet many homebuilder stocks are trading at crisis prices!

First, you should know that NVR achieved all-time record earnings in January...

Yet its stock is trading at just 13-times earnings… its cheapest level since 2009.

That’s a combination you rarely see outside of a crisis.

Under the hood, NVR is an exceptional company with a unique business model.

You see, most homebuilders buy raw land then build houses on it.

This is risky. The company must first pay up-front to own the land. Then it will plow money into developing the land… and then finally into building the houses.

This can take a long, long time. Most homebuilders must pump in vast sums of money for years before they see even a penny of return.

Even worse, they hold the land on their books the entire time.

Imagine buying land in 2004 when the housing market was booming?

You would have paid through the nose.

And by the time you finished developing it years later, the market had tanked.

This is unique among homebuilders. It means NVR avoids the riskiest part of the business.

Think about that… even in the worst housing downturn ever, NVR still managed to turn a profit.

Today NVR is far more profitable than its rivals. Its net profit margin is almost double the industry average. Meaning for every dollar of sales, NVR shareholders see twice as much profit.

This all makes NVR a very safe investment. And because it plunged 43% last year, there’s plenty of upside.

Are homes selling fast in your neighborhood? Tell me at Stephen@riskhedge.com.

New RiskHedge reader Bill has a question about quantum computing:

I’m a new subscriber and I’ve already made a little on your most recent recommendations.

I really like the idea of finding disruptor stocks to invest in.

One technology I think has huge potential is quantum computing, which could completely disrupt everything from the internet to healthcare. Which companies are the best investments in this space? Google… IBM?

Bill, thanks for your question. I’m glad to hear you’re making money on disruptor stocks.

As you alluded to, Google, IBM and a handful of startups are working to create the most powerful computers the world has ever seen.

In fact, you can’t compare computers today with quantum computers. They run on totally different principals.

I often say, it’s like jumping from the candle to the lightbulb.

So while it’s an exciting trend that’s worth keeping an eye on, no company will be making money in quantum computing anytime soon.