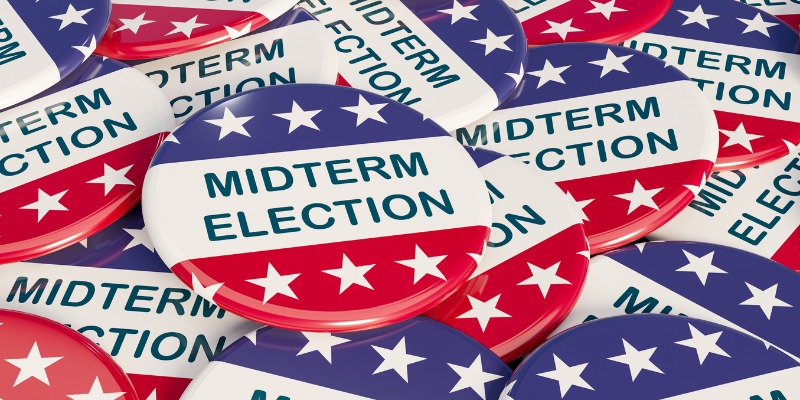 Should you sell your stocks ahead of Tuesday’s big election?

Are you prepared for Tuesday?

It’s going to be a crucial day for the stock market.

If the polls are correct, President Biden and the Democrats are in big trouble.

According to statistical analysis firm FiveThirtyEight, there’s an 83% chance Republicans will seize control of the House of Representatives from Democrats. They also show Biden currently has a 54% disapproval rating.

But here’s the thing: no matter which side you’re on... as an investor, you should be looking forward to Tuesday. And more importantly, the next 12 months...

Today, I’m going to share undeniable proof—a 20-for-20 indicator backed by eight decades of stock market history—that shows you want to be invested ahead of the big day.

I’ll also share one of my favorite stocks to buy now.

Few topics stir emotion in America like politics. Many perfectly reasonable people lose the ability to think straight when they start talking about Washington.

So, let’s steer clear of opinion and emotion. Instead, I want to focus solely on the facts that are relevant to you as an investor.

As you’ll see, you don’t need to waste even one second worrying about which party will win on Tuesday.

US stocks climbed higher in the next 12 months after every single one.

For each of the past 20 midterms, stocks have ALWAYS climbed higher a year later. Always.

I bet you can’t find another stock market indicator with a perfect 100% track record over 80 years.

See the results for yourself here. A Republican president with a Democratic Congress…

A Democratic president with a Republican Congress…

Since 1942, stocks have jumped an average of 15% in the year after a midterm.

For perspective, that’s more than triple the average performance for stocks in all years.

Take a look at this chart…

The performance of stocks in the third year of a presidential term beats all other years by a long shot. Glance up at the chart above once more, and you’ll notice the second year of the presidential cycle is typically the worst for stocks.

Leading up to midterms, US stocks typically perform poorly. From January to October in midterm years, they drop an average of roughly 1%.

In all other years, stocks rise roughly 7% in that timeframe.

Think of midterm elections like a thick fog covering markets…

Unable to see what’s coming, investors get nervous and act cautiously—just as they would slow down while driving a car through a thick fog.

Once the election concludes and the fog clears, investors regain confidence, and the market gets back on track.

As I mentioned, from January to October in midterm years, stocks fall roughly 1%, on average. But once midterms are in the rearview, stocks go from down 1% to finish the year up 6%, on average.

More importantly, stocks have finished UP in the 12 months after every midterm election since WWII.

I expect a similar script will play out again this time.

There’s no guarantee, of course. But I’m not going to bet against a trend that’s worked for nearly a century.

The bottom line is: we’re going from the typically worst period for stocks to the best period. Don’t get paralyzed by the current market situation.

Most investors are scared to buy stocks right now…

Even pro-money managers are hiding out in cash…

Today, you can buy your favorite stocks—on sale. All before the “midterm surge.”

That’s what I’m doing with my money.

Long-time readers know ASML is one of my favorite stocks. It’s more than doubled since I first recommended it in 2018.

ASML is the only company on the planet that makes the machine capable of producing the world’s fastest computer chips.

Computer chips are the most important resource in the world. They are the “fuel” powering every modern technology, from data centers to smartphones and electric cars.

No company on this planet can make the latest and greatest chips without ASML’s machines.

Yet, ASML is trading near its cheapest valuation since 2016. The last time you could buy it at this price, it more than doubled your investment in two years.

ASML is the perfect stock to ride the midterm surge.

That’s all for today. What do you think… will this indicator go 21-for-21, seeing stocks rise over the next 12 months like they have every midterm since 1942? Or do you see things playing out differently this time around? Write me at stephen@riskhedge.com.