How to Collect Explosive Profits off the “Internet of Things”

Google (GOOG) just made a statement.

On August 3, Google announced that it’s investing $450 million in home security company ADT (ADT). The investment will give Google a 6.6% stake in the company.

Simple. Google’s asserting its dominance in one of today’s biggest megatrends.

Investors who see where this is headed stand to make a fortune… but only if they know how to play it. And it’s not Google. The two stocks I’ll share with you today offer much more explosive upside.

But let’s first look at why Google is investing hundreds of millions into ADT.

But it’s far from a one-trick pony.

And it owns Waymo, the #1 self-driving car tech company.

IoT refers to a world where connected devices “talk” to each other.

Not long ago, IoT was just a buzzword. It was a trend that was always on the horizon… but never quite arrived.

Not anymore. These days, roughly one in four US adults have an Amazon (AMZN) Alexa, Google Home, or other voice-enabled digital assistant inside their home.

The market for smart lightbulbs, thermostats, and home appliance is also exploding.

And today, about 21% of Americans own a smartwatch or fitness tracker.

That’s why last November, Google bought Fitbit, which makes one of the world’s most popular smartwatches, for $2.1 billion.

Google also owns Nest—one of the world’s most popular smart thermostats and one of the first IoT products to truly go mainstream.

Google’s new partnership with ADT will only further cement its dominance in this space.

The partnership will make Google Nest devices “the cornerstone” of ADT’s smart home offering. ADT will utilize its professional sales and installation network to get Google’s smart devices into more people’s hands.

ADT will also use Google’s artificial intelligence (AI) capabilities to provide enhanced security. ADT customers will be able to track who’s coming in and out of their homes. 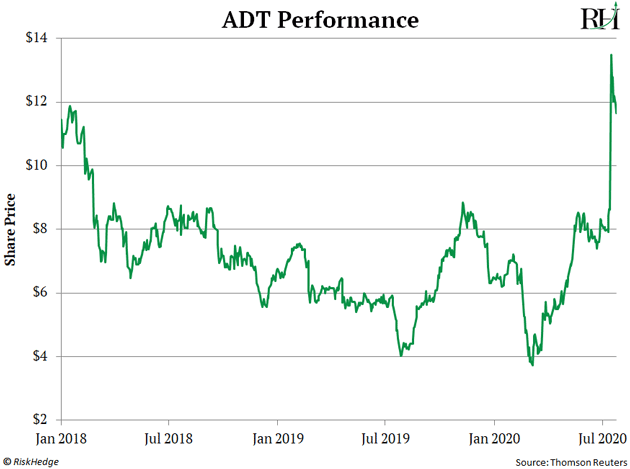 The Global X Internet of Things ETF (SNSR), a fund that invests in companies benefiting from the IoT craze, popped 4.5% last Monday. SNSR is also now trading at record highs. 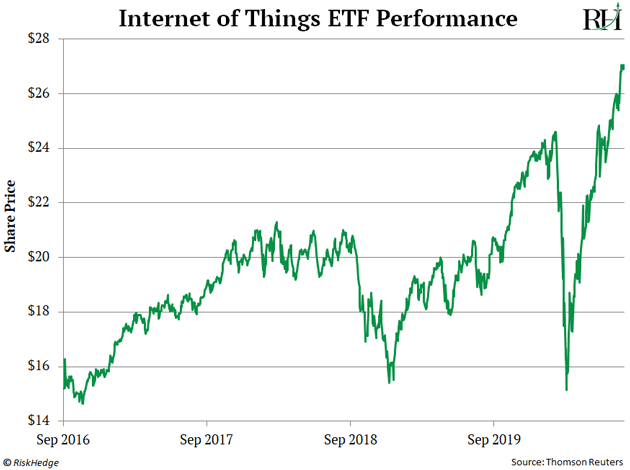 But don’t worry if you missed out on these big moves. IoT stocks should be top performers for many years to come.

According to Statista, there were 23 billion connected devices in 2018. By 2025, there will be more than 75 billion. That’s a three-fold spike in just seven years!

But IoT isn’t just revolutionizing how we interact with devices in our homes… or helping us catch potential burglars.

It’s also radically changing how goods are produced. According to PricewaterhouseCoopers, 35% of US manufacturers have already adopted IoT technology.

Use of IoT technologies will only accelerate as connectivity improves (think 5G and edge computing).

It’s a “one-click” way to get exposure to IoT.

But if you want to make bigger profits, I suggest focusing on the best stocks. And there’s one corner of this market that should offer the most explosive gains: “connected” medical devices.

Take the pacemaker, for example. These heart tracking devices have been around for decades. Before, if there were any issues, you’d have to go see your doctor.

Now that they’re connected to the internet, doctors can adjust settings without requiring an invasive procedure or even a visit to the office!

The US industry alone is worth $3.5 trillion.

The sheer size of healthcare, an aging US population, and huge cost savings are driving rapid adoption of connected devices.

In fact, mHealthIntelligence estimates that 88% of healthcare providers are already investing in remote patient monitoring solutions.

According to investment bank Goldman Sachs (GS), these devices will save the healthcare industry $300 billion annually in the coming years.

Connected devices are becoming so big that the space is known as the “internet of medical things (IoMT).”

For example, subscribers to my premium advisory IPO Insider are already up 338% on Livongo Health (LVGO) in just six months. And it’s likely headed much higher as it merges with telemedicine giant Teladoc (TDOC).

But there will be many more “Livongos” in the months and years to come.

Thanks to COVID-19, demand for “contactless care” is soaring through the roof. Plus, a bill was introduced in June by two US senators to expand essential access to remote monitoring across rural America and on tribal lands. So, this megatrend has support from Washington.

Two of my favorite IoMT stocks are DexCom (DXCM) and Tandem Diabetes Care (TNDM). Let me know if you plan on investing in this megatrend at jspittler@riskhedge.com.

A Supreme Court ruling has unleashed a new type of internet “tollbooth” stock set to rip 200% now—and up to 1,000%—as it cripples Amazon’s growth.

The best part is: when you own this stock, you own the toll. Learn all about this unusual situation—and how you can start profiting ASAP—here. 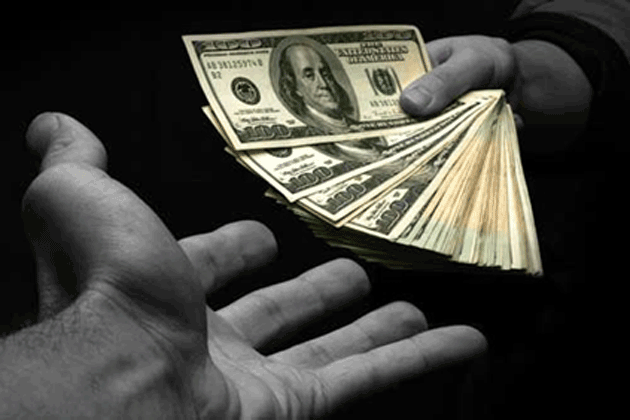