Smart hunters prey on the weak.

That may sound heartless...

But lions instinctually know not to chase fast, young gazelles.

Instead, they run down the old limping gazelle in the back of the pack.

Amazon (AMZN) first went after bookstores like Barnes & Noble and Borders. What could be easier than selling books online?

Then there’s Netflix (NFLX). It didn’t challenge mighty Disney (DIS) right away. It went after the limping gazelle known as Blockbuster, a company that hadn’t evolved much in decades.

It went after the world’s tech giants from the very beginning... and won!

There wasn’t a media circus around its initial public offering (IPO) like we often see. In fact, most investors didn’t even notice. Everyone was focused on Google (GOOGL), which was set to go public just two months later.

But you would have made far more money buying this under-the-radar stock than buying Google.

The company I’m talking about is Salesforce (CRM). It has surged an incredible 4,400% since it went public in 2004—nearly doubling Google’s return! 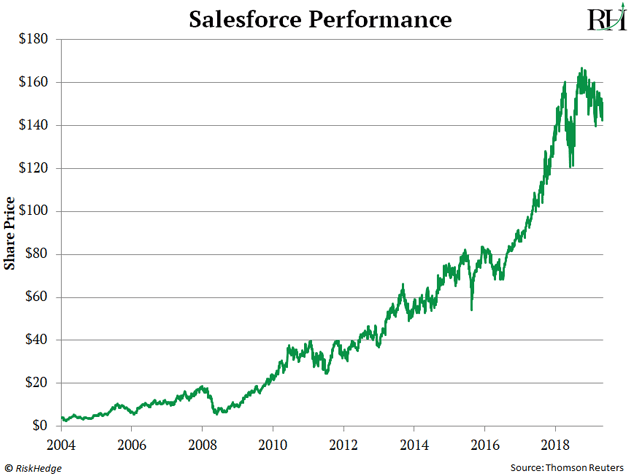 Still, it’s something of a mystery.

Everyone’s heard of the company… but most investors couldn’t tell you what it does.

But that’s NOT why Salesforce’s business grew more than a hundredfold in just 15 years.

Instead, it became a world dominator by disrupting how software is sold.

Remember back when you’d buy software from a store? It came in a shrink-wrapped CD case. You’d then go home and install the program on your computer.

Companies had to do the same... except they used A LOT more software.

To manage it all, a company had to hire an IT team… or at the very least, a “tech guy.”

A company needed servers to run the software. If it was big enough, it would need warehouses full of servers!

And paying for it should be as simple as paying your electric bill.

So, he started selling software on a subscription basis. Customers paid monthly for access, instead of buying the software outright.

In short, Benioff reinvented software. He took it from a “product” that companies sold, to a “service” that it managed for its clients.

This might seem like a subtle shift. But Benioff’s simple idea ignited one of the biggest stock booms of the century... a boom that’s still going strong today.

Salesforce pioneered the SaaS—or software as a service—model. Hundreds of other companies then copied it.

The stocks of many of these SaaS companies have shot to the moon, handing investors massive profits. 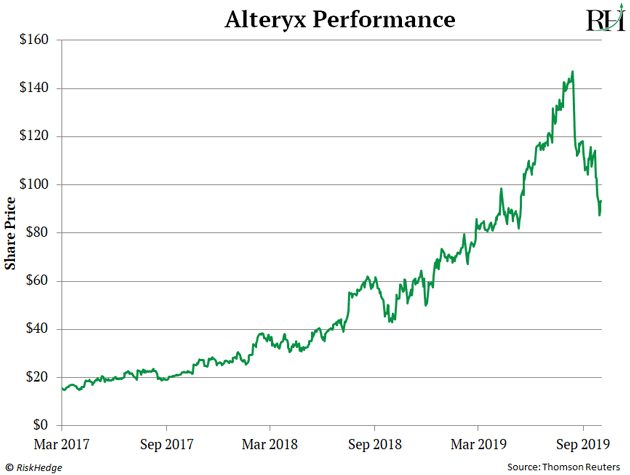 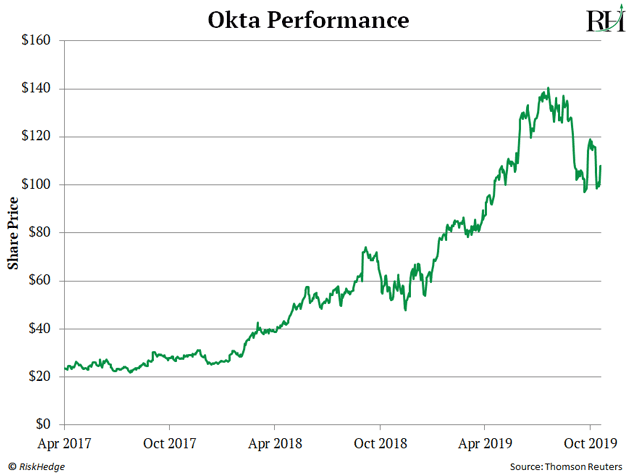 ZenDesk (ZEN) helps companies work better with their customers. Its jumped 758% after going public in 2014… 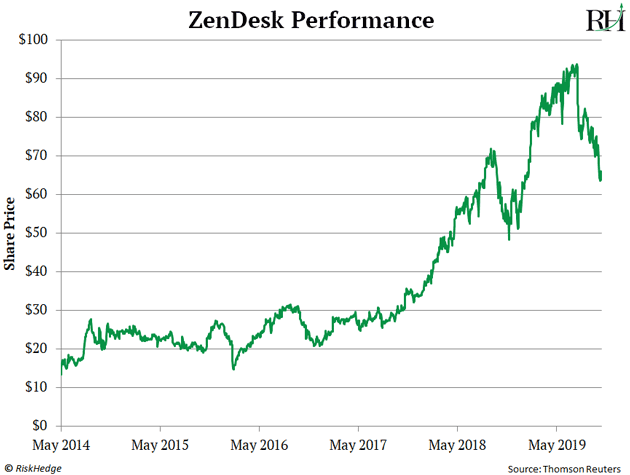 There are plenty others...

For perspective, the S&P 500’s sales are growing at about 8% per year.

And let’s not forget about Salesforce. Its sales are still growing around 27% per year.

That’s incredible for a giant $120 billion company that went public 15 years ago.

Why are SaaS companies growing at warp speed?

For one, customers love the pay-as-you-go model. They’re happy to avoid shelling out a ton of money on software upfront. And many CEOs are thrilled they no longer need to maintain a warehouse of servers…or hire a small army of highly paid computer engineers… or worry about constantly upgrading the software.

The SaaS provider takes care of all that overhead.

And not just because it supercharges growth.

Software is also what’s known as “scalable.” It’s not like selling cars where you have to pay for the material and labor to manufacture every car you sell. Once the software service is up and running, the incremental cost to serve a new customer is often dirt cheap.

Like Salesforce, many of these companies won’t get nearly as much attention as companies like Uber (UBER) or Lyft (LYFT).

I get it... software is boring.

But these are exactly the sort of IPOs you should be buying into on the ground floor.

Here are two private SaaS to keep an eye on. Both should go public in the near future:

Snowflake Computing helps companies like Netflix, Square, and Adobe analyze their data. Like other SaaS companies, it’s growing at warp speed. Snowflake’s customer base has quadrupled over the past year, and its sales are growing about 30x faster than its peers.

In May, Snowflake brought in Frank Slootman as CEO. Slootman previously headed up ServiceNow, which—again—has surged 1,228% since it went public in 2012.

Databricks also helps companies make sense of their data… and business is booming. Its subscription revenue has tripled since last year.

Databricks is aiming to have its financials “IPO ready” before the end of the year, suggesting that an IPO is likely around the corner.