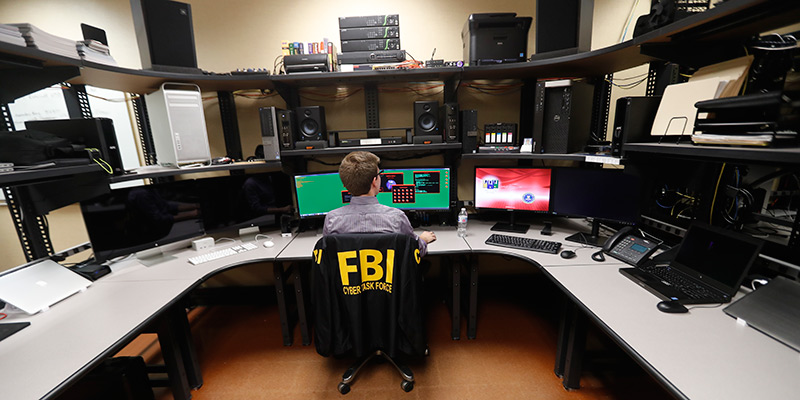 Who deserves your trust?

Obama called it “the worst disaster America has ever faced.”

At six and a half miles deep, it was like a giant needle jabbed into the earth’s veins.

But just before it was set to begin pumping oil, workers made a terrible mistake.

They failed to seal the well properly, which allowed flammable oil and gas to shoot up to the surface and cause a huge explosion.

In all, it killed 11 people… sank the $560 million Deepwater Horizon drill rig to the bottom of the ocean… and released three million barrels of black oil into the Gulf of Mexico.

The US government would fine BP a record $21 billion.

BP’s stock would plunge 55%, wiping out $105 billion in shareholder value.

Keep in mind, it was the worst environmental disaster in US history and the worst oil spill in world history.

BP will be associated with it forever.

And beyond the financial costs, BP suffered a total loss of trust with the public. For years it was perhaps the most hated company on the planet.

So how much is too much to pay to avoid all this?

They aren’t worried about oil spills.

Something that could ruin their business overnight.

In 2017, The Economist magazine ran a story about how data has surpassed oil as the world’s most valuable resource.

Many of today’s super-firms have gotten rich collecting and selling personal data. Amazon (AMZN), Google (GOOG), and Facebook (FB) all earn a BIG chunk of their profits from leveraging and selling users’ data.

These are the third, fourth, and sixth biggest publicly traded companies on earth.

This year Google will earn over $100 billion from selling online ads. It has mastered the business of collecting data and using it to figure out who you are and what you’re likely to buy.

For example, try doing a Google search for a ski vacation. Chances are ads for skis, mittens, and lift tickets will start following you around to every website you visit.

Look at Facebook to see how a loss of trust can ruin a company.

Since going public in 2012, Facebook stock has shot up 400%. For years it was a Wall Street darling.

In April, the love affair ended with a thud.

Facebook stock plunged 17% on the day of the news. It marked the biggest single-day wipeout of shareholder value in US stock market history.

Things only got worse from there.

In the past four months, Facebook stock has plunged 35%—erasing $221 billion in wealth. Take a look at this chart of Facebook stock. It is ugly. 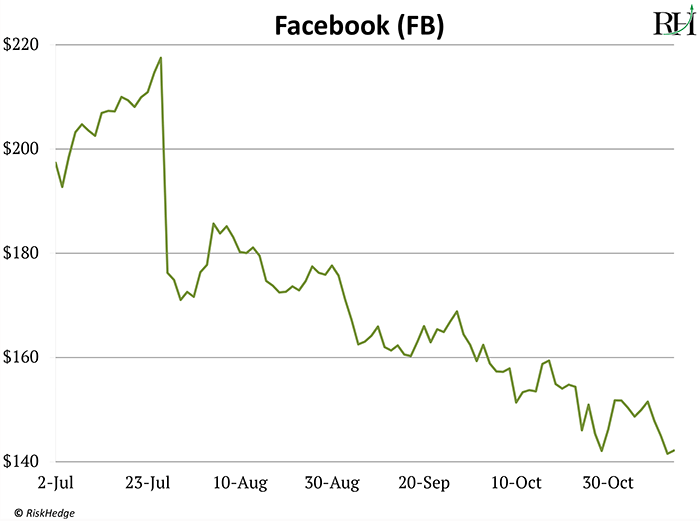 The company’s reputation is in shambles. A recent study by Fortune found Facebook is the least trustworthy of all major tech companies when it comes to safeguarding data.

For example, have you heard about its new video-calling device—The Portal?

You probably have not, because the major media have practically ignored it.

A Wall Street Journal review summed it up best: “I couldn’t bring myself to set up Facebook’s camera screen in my family’s home. Can you blame me when you look at the last 16 months?”

Facebook’s data breach has been a total disaster. 98% of its revenue comes from selling online ads, which it can only do effectively if people continue to allow it to collect their personal data.

When nobody trusts Facebook, the company is dead in the water. Its user growth numbers in the past two quarters have been terrible. For the past two years it has added an average of 46 million new users every quarter. That’s now been cut in half to 23 million.

Facebook has hired the equivalent of a small city to shore up its cybersecurity. Its cybersecurity headcount has doubled to 20,000 workers… in just 6 months!

It’s too little too late. Once you lose the trust of your customers, almost nothing will get it back.

No cost is too high when it comes to protecting your customers’ data.

This is why I love the booming cybersecurity business.

Smart companies are spending billions to upgrade their digital defenses. According to top IT research firm Gartner, cybersecurity spending will hit $114 billion this year. Demand for cyber services is set to explode by 70% in the next five years.

The best thing about cybersecurity is there’s a bottomless appetite for it. Hackers are constantly finding new ways to exploit vulnerable systems.

So companies must keep pouring money into building their digital defenses.

The largest cybersecurity ETF (HACK) has trounced the S&P 500 close to 5x in the past year, as you can see here:

Every company—big, small, domestic, global—needs reliable cybersecurity today. You can’t run a business without it.

Growth in cybersecurity is one of the top disruptive trends that will define the next decade.

I like what cybersecurity firm Fortinet (FTNT) is doing.

My contacts in the cyber industry tell me many companies suffer from one key problem. They use many different cybersecurity products, which leave holes in their defenses that hackers can exploit.

A report from Cisco (CSCO) found that 46% of firms use more than 11 different cybersecurity products.

It combines dozens of cyber solutions into a single product. You get network, email, web, cloud, mobile security, and much more… all in one.

Gartner just named Fortinet as a cybersecurity market leader for the ninth time in a row. The company’s revenue has exploded 135% in the past four years. And its stock is up 140% in the past two years.

So… have you been victim of a cyber hack? Had your personal info stolen? Tell me about it at stephen@riskhedge.com.

I received a lot of questions on my article about NVIDIA (NVDA). I’ll answer two of them here:

Sid, thanks for your question. Yes, but AR makes up a tiny portion of NVIDIA’S revenue. By far the largest driver of NVIDIA’s stock is its gaming business, which accounts for roughly 55% of its sales.

Stephen, thanks for the newsletter. On NVDA, two things: #1 - Some of the large tech firms have started talking about making their own chips. #2 - It seems that self-driving cars will be much more limited in their usage as there are still plenty of problems to be resolved (rain, snow). Hence they'll operate in places like Arizona where weather is generally clear. Given these factors, will NVDA be able to maintain this level of growth?

John, you’re correct in saying companies like Amazon and Google are building their own chips. The thing is… it’ll take them at least five years to get remotely close to making cutting-edge chips like NVIDIA.

On self-driving cars, it’s true that rain and snow can still cause major problems for the sensors and LIDAR systems. However, Waymo is using machine learning to “teach” the cars how to drive in these environments.

In September, it announced it was making good progress. And it’s now testing self-driving cars in 25 cities across America, including snowy Detroit and rainy Seattle. Fully self-driving cars will take a little longer to roll out in places with bad weather. But you can be sure they’re coming.