Wave goodbye to your delivery guy

When my daughter was born, Greg stopped by my house almost every day for two weeks.

He dropped off her crib, stroller, and all the other baby “gear” my wife and I ordered online.

As you might guess, Greg is my UPS delivery guy.

He pulls up to my driveway in a big brown truck... hops out wearing a brown uniform... and places a brown box or two on my stoop.

I’ve known Greg for years now. He’s a friend. He always stops to chat and ask how my daughter is doing. I even gave him a key to my gate.

Amazon (AMZN) kicked off the internet shopping boom in the 90s when it started shipping books. These days, you can click a button and get almost anything delivered to your door. Amazon sold $164 billion worth of stuff on its website this year.

If there were a stock market hall of fame, Amazon would be first in line. It has handed early investors 90,000% gains, as you can see here. 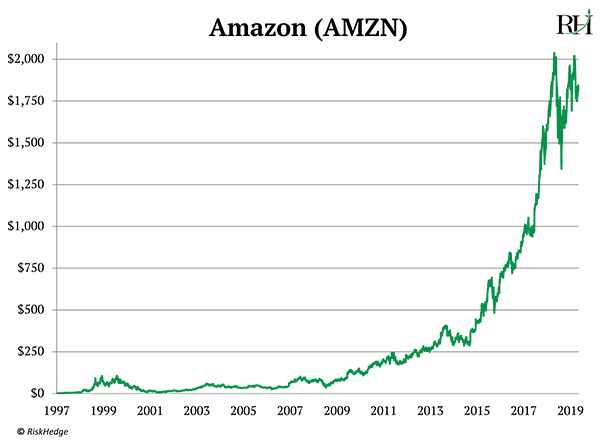 America’s two largest delivery companies—UPS (UPS) and FedEx (FDX)—got all that “stuff” from sellers to buyers.

It won’t surprise you to learn the online shopping boom has been wonderful for their businesses. Their revenues have almost tripled since 2000, to a combined $140 billion.

So surely their stocks have handed out big gains. Right?

UPS and FedEx stocks have flatlined for years, as you can see here: 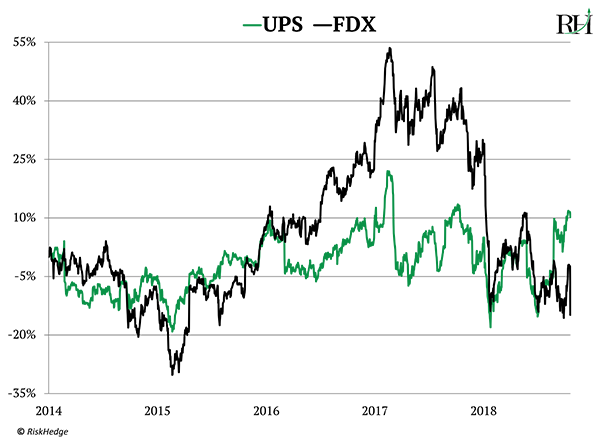 Those are cargo planes with “Prime Air” written on the side.

No company in the world spends more on shipping than Amazon.

And it’s one of UPS’s largest customers, making up roughly 10% of its sales.

But over the past couple of years, Amazon has been working on a project that should terrify UPS and FedEx...

It has quietly blanketed America with its own delivery web.

Today, Amazon operates almost 400 distribution warehouses in the US alone. And these are no run-of-the-mill post offices.

Many span millions of square feet. Inside, swarms of “Pegasus” robots whizz around carrying stacks of items.

And did you know Amazon has built up a 20,000 strong fleet of delivery vans?

It also owns 60 cargo planes like the ones you see above.

And 60% of Amazon parcels are now delivered by Amazon drivers.

As I mentioned, UPS only gets around 10% of its sales from Amazon. While FedEx counts on Amazon for less than 2% of its business.

So many folks conclude Amazon’s creation of its own delivery service won’t hurt these companies too much.

Back in 2000, Amazon was on its way to dominating online shopping. As its website exploded in popularity, so too did its need for computing power.

So it started renting giant warehouses and packing them full of supercomputers. Its stated intention was to “supplement” its internal need for computing power.

If you’ve been reading RiskHedge, you know giant companies like Uber (UBER) and Netflix (NFLX) run on Amazon’s cloud services.

Sure, Amazon will first take care of its own delivery needs.

But I’ll bet anything that Amazon will soon start selling its delivery services to others—just like it did with its cloud business.

In fact, Amazon now calls UPS and FedEx competitors in its annual report.

Amazon recently launched its new “Shipping with Amazon” service. In short, Amazon’s drivers will now pick up packages from “third-party sellers” who sell stuff on Amazon. It will then deliver that stuff to buyers, cutting out the need for delivery services like FedEx or UPS.

What are the chances Amazon opens up “Shipping with Amazon” to everyone in a year or two?

For my money, it’s a dead certainty.

It’s bad enough that the most disruptive company in history is invading UPS and FedEx’s turf.

It’s even worse that many of America’s most powerful companies are following suit.

The world’s largest retailer, Walmart (WMT), now runs over 6,000 of its own delivery trucks. It has spent over $2.5 billion on its “logistics wing” in the past two years.

Home improvement superstore Home Depot (HD) is investing billions into delivering its own products, too.

UPS and FedEx have a big problem: They are the ultimate “middlemen.”

As RiskHedge readers know, middlemen can always be cut out.

As I mentioned last week, disruption has wrecked middlemen jobs like stockbrokers and travel agents.

Realtors are next in line.

Now disruption is coming for delivery guys, too.

Don’t be surprised if your UPS guy begins stopping by a lot less...

And delivery guys from Amazon, Walmart, and Home Depot start stopping by a lot more.

Does your delivery driver know Amazon is getting into his business? Ask him and then tell me at stephen@riskhedge.com.

We received a ton of responses to last week’s letter about the disruption of real estate agents. Here are a few:

Stephen, I had to write you to let you know that your letter was an amazing coincidence.

You ask if I would ever use a real estate agent to sell my home and my answer is an absolute NO! We have sold three houses in the past eight years and not one was sold with the help of a realtor.

I did buy my most recent house directly without the use of a realtor on either side. It was a $1.4M deal, so we avoided a fair amount of fees.

­I used Redfin when I bought my current house. There’s no hand-holding while you’re shopping. If you want to get in to see a property, they pay regular real estate salespeople a token amount to let you in. Redfin didn’t get involved until we were ready to make an offer. They handled the offer and negotiation and handed me back 1/2 the agent fees because of their skinny model.

An added plus: When Wells Fargo “lost” our mortgage application and threatened to screw up the closing, Redfin not only got it fixed but got Wells Fargo to waive over $1,000 in bank fees.

Absolutely, I would sell the house online. The real estate agent does little to earn the 3–6% return on their time.

I have sold two houses privately without using an agent. I think it depends on the market and the area you are selling in. I sold both of my places in less than three weeks, but the market was pretty active for the type of house and both were in good areas. My son also sold his privately as well in about a month.

I have sold two houses privately without using an agent. I think it depends on the market and the area you are selling in. I sold both of my places in less than 3 weeks but the market was pretty active for the type of house and were in good areas. My son also sold his privately as well in about a month.

Stephen, we bought our current condo using Zillow and contacting the owner directly. Bought it during the first visit. It worked out very well.

The last five property deals have been realtor-less on my side. All deals went smoothly without any hitches whatsoever. I have offered to have them help me buy or sell at a lesser percentage and they have refused every time. So as far as I'm concerned, they are cutting their own throats.

In 1995, I bought 85 acres of bare land from a developer and did the transaction without an agent. In 2002, I resold this land to another developer for a fat profit and no agent. I saved many thousands of dollars with DIY real estate transactions. It's not always easy to find a buyer/seller that will go along with such a thing, but it's well worth a try.

Stephen, we sold a home in VT, FL, and PA WITHOUT real estate agents. Saved tons of cash and they sold quickly. No way would it have been worth real estate agents, and we got fair market value on all thanks to extensive online research and realistic expectations.

Another great article—Thanks. We'll be in a position to sell our house soon and are planning on doing it "for sale by owner." Zillow will make that much more practical than it was in the past, but we'll still have an uphill battle and plan on pricing the house under market. I hadn't heard of Opendoor, but now will be contacting them first.

Stephen, so funny you are sending this message on buying and selling homes. My wife and I recently sold our condo, and I really considered listing with Redfin. I think we could have paid about half in fees. But in the end, we went with a realtor—it’s just a bit too new still I feel. I was thinking about you, though, and looked at Redfin as a potential industry disruptor.