The only way to crush inflation (not stocks)

Folks are freaking out about inflation.

You’re likely feeling it in your pocket too.

Tried to buy a car lately? If you can get your hands on one, it’ll cost you 40% more than last year.

Home prices are rising at their fastest pace in more than 30 years. And here in Ireland, the average heating bill is expected to jump $500 this winter.

Now investors are worried inflation is going to crash the stock market.

Should you join them and sell your stocks to take cover from inflation?

After all, there’s only one guaranteed way to lose money to inflation: Don’t invest your savings at all.

And there’s only one guaranteed way to beat inflation: Own assets that go up in price.

Today I’ll share two proven ways to beat inflation, and one way to absolutely crush it…

Vanguard founder John Bogle once said: “I think whatever your view of the world is, you have to invest. You can’t put the money in the mattress and in this day and age of low interest rates, you can’t put it in the money market fund or a bank CD, so invest, you must.”

These days, owning a piece of a successful business, or owning stocks, isn’t a nice-to-have. It’s a must. Buying stocks is one of the best ways to beat inflation.

The higher costs that inflation brings on are bad for individuals and families. But they can be good for businesses. Businesses can pass on higher costs to customers, which can boost profits… and their stock prices.

Investors who simply bought and held the S&P 500 have stayed ahead of inflation.

Stocks are also the only asset class that beats inflation on a consistent and reliable basis.

Wall Street bank Goldman Sachs did a recent study on inflation. It found “US equities have outperformed inflation 100% of the time over any 19-year window.” 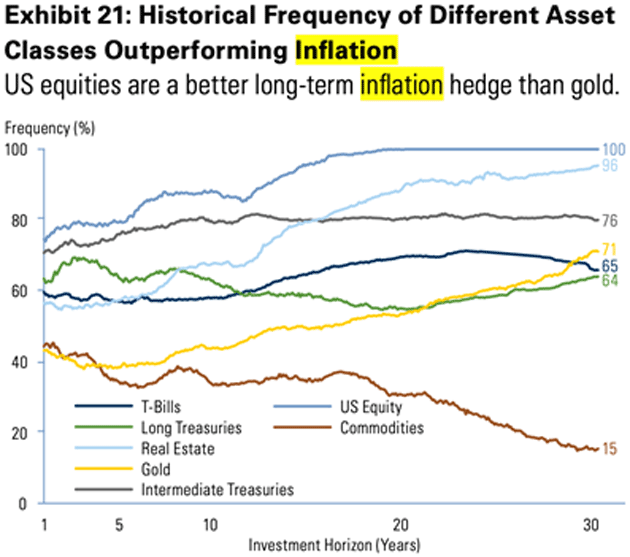 That’s twice as effective as gold, which many people wrongly assume is the ultimate inflation hedge. The same study found that “gold outperforms inflation only about 50% of the time over a 19-year window.”

US home prices are rising at their fastest pace in more than 30 years. The median home price in America has surged $75,000 in just the past five years. And get this… according to Bloomberg, 31% of all homes sold last year cost over $500,000.

Sounds bad, right? Depends on who you ask.

This inflation in home prices is great if you are a homeowner. Anyone who bought a home in the last few years has likely seen its value surge.

But for folks looking to become homeowners, housing inflation is terrible. Less than a quarter of homes sold last month went for under $300,000. That’s a big ask for many first-time buyers.

Regardless, real estate has been a top way to stay ahead of inflation. A study from famed economist Robert Shiller found home prices have outperformed inflation by roughly 1% per year since 1950.

In other words, owning a home gives you a small return above inflation… and you also get a place to live. That’s a sweet deal.

As I mentioned, beating inflation boils down to one thing:

What assets have handed investors the biggest returns over the past decade?

The best-performing asset, bar none, has been crypto. Bitcoin (BTC), the first and largest crypto, has surged 994,600% over the past decade. 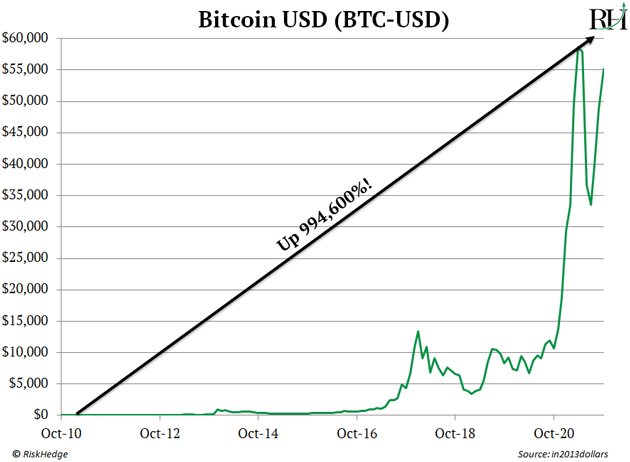 Folks who bought bitcoin at pretty much any time over the past decade have made huge returns.

And how’s bitcoin doing today in the face of all the scary inflation headlines?

It’s up 45% over the past three months… and recently surged back to $55K for the first time since May. Meanwhile, the S&P 500 is flat over the same time frame. 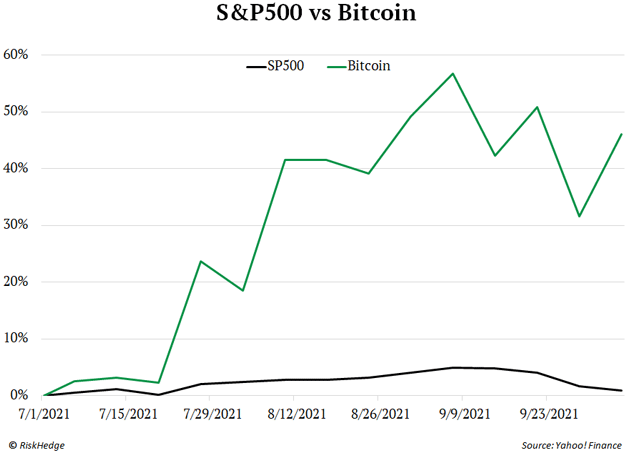 Bitcoin has been an incredible asset to own, but I’m not interested in buying it today.

Not because I don’t think bitcoin will continue to rise… . My research suggests it could hit $1 million per coin over the next five years.

But I prefer to own smaller, faster-growing cryptos with higher upside.

Bitcoin was the first and remains the most popular crypto asset. But it’s the least interesting today. In fact, bitcoin is only the 76th best-performing crypto this year.

I’ll have a lot more to say about cryptos soon.

In the meantime, I’d like to hear from you. Do you own any crypto other than bitcoin or Ethereum? Write to me at Stephen@riskhedge.com.