This Is the End of College as We Know It

May was supposed to be a time of celebration.

Normally, it’s when students across the country graduate from college… and prepare to enter the “real world.”

This year was different. Coronavirus has shut down most colleges and universities. Last month, it was reported that 9 out of every 10 students in the world stopped going to school.

It’s anyone’s guess when colleges will reopen. But one thing’s for sure…

Unlike airlines, hotels, and cruise ships, many colleges will NOT bounce back after coronavirus fades away. While they might not admit it, many colleges have already shut their doors for good... because their business model never made sense in the first place.

To be clear, coronavirus isn’t killing college. It’s serving as a wake-up call to millions of kids and parents. They’re finally asking the obvious: Might it be a bad idea to load children up with $100,000+ in debt in exchange for a degree that, in many cases, offers questionable value?

Today, I’ll show you two companies capitalizing off the “new normal” in college…

College attendance is all but guaranteed to drop this fall. When some college campuses finally reopen, many students simply won’t go back to school. Some will take a year off. Others will never go back.

This spells financial disaster for many colleges that rely on tuition to keep the lights on.

A recent survey found that 72% of university presidents plan to lay off staff. And 55% are planning “across the board cuts.”

As you surely know, the cost of college has skyrocketed. The average price of a four-year college degree has jumped 15X over the last 40 years!

You’d think that colleges would be flush with cash due to rising tuition costs. You’d think they’d be in a good position to ride out this storm. But that couldn’t be further from the truth.

According to credit rating agency Moody’s, 30% of colleges were running deficits before coronavirus. Not only that, 15% of public universities had less than 90 days of cash on hand!

As regular readers know, if you want to know what’s REALLY going on with an industry, watch stock prices. Most investors watch the news to learn what’s going on, then make investment decisions based on that information.

This is backwards. The news is full of bias and politicization. Often, it just gets things wrong.

I look at a company’s stock price to get the purest “read” on a situation.

This is terrible news for some companies. Look at this chart of American Campus Communities (ACC), the nation’s largest developer of student housing apartments. It’s plummeted 36% since 2016. 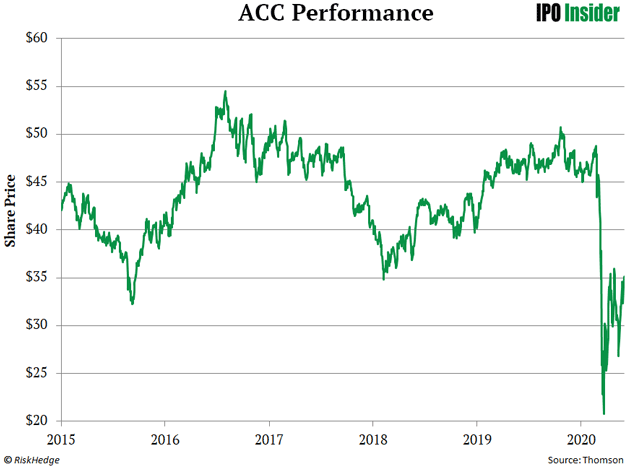 ACC is trading well below its falling 200-day moving average. It’s in a clear downtrend. And it’s unlikely to change course anytime soon.

You don’t need to wait for the talking heads to tell you there’s a big problem here. If the no. 1 student dorm stock is tanking, that tells me all I need to know.

As I said, many colleges will never open their doors again. But that doesn’t mean that young people will stop getting degrees…

We’re seeing this play out before our eyes. Countless universities worldwide have been experimenting with online education.

The global online education market was worth less than $19 billion last year. By 2025, it’s projected to be a $350 billion industry. In other words, it’s poised to grow 18-fold over the next five years!

Online education is far more efficient. It requires less overhead. And it allows instructors to teach more students at once.

Online degrees cost about half of what it costs to receive the same education in a classroom. And that spells opportunity for a handful of companies.

It offers a homework assistance platform that can be accessed 24/7. For years, Chegg was a boring business. It mainly sold used textbooks. But it’s completely reimagined its platform.

Its 3 million subscribers pay around $15 a month to access its platform. My IPO Insider readers know this “recurring revenue” is something I love to see in a company.

Chegg has performed exceptionally since its IPO… surging 548% since it went public in 2013. 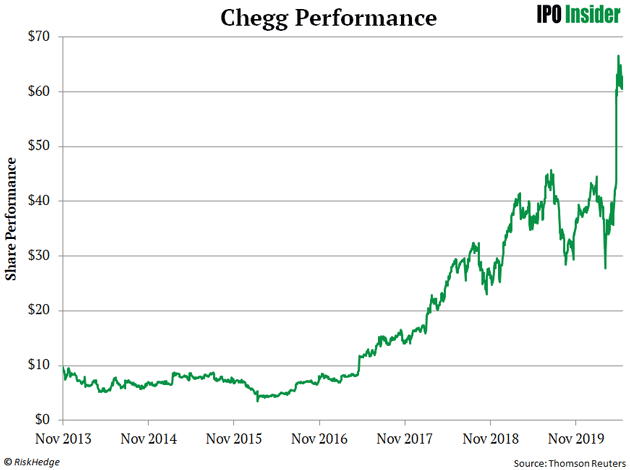 I see it headed much higher. It’s a leader in every sense of the word.

The company just reported blow-out earnings. Last quarter, its total subscriber base grew 35%! According to its CEO, Chegg is experiencing “astronomical” growth. And that should only continue since the company is predicting that “about 20% to 25% of colleges are going to go bankrupt.”

Coursera operates a website where students can enroll in courses from many of the world’s top colleges—like Stanford, Yale, and Princeton. Individual courses start at around $39 per month.

As I recently told readers of my IPO Insider advisory, Coursera will likely come out from the coronavirus crisis stronger than ever.

In March, the company started offering its entire catalogue of 3,800 courses and 400 specializations for free. According to Coursera’s CEO:

We’re seeing a huge acceleration in something that’s already been happening, which is a move towards online education. When things get to a new normal, certainly people will go back to school, but it will never be the same.

Many universities will eventually reopen. But like remote work, the current shift to online education will likely be “sticky.” More and more students will realize they can get the same education without getting into an insane amount of debt… and they’ll never turn back.

I say this because we’ve seen “investor appetite” for online education IPOs explode in recent years.

2U Inc. (TWOU)—a competitor of Coursera—went public in March 2014. Its stock surged 655% in its first four years as a publicly traded company. 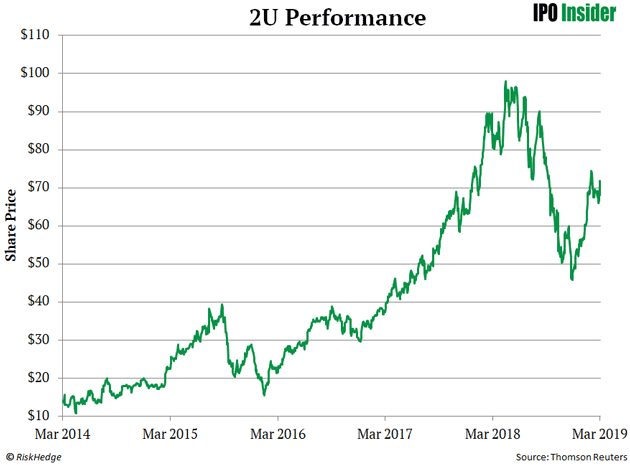 When it does go public, Coursera could easily become the best way to bet on the rise of online education.

And I wouldn’t be surprised if Coursera IPOs sooner than planned. After all, Chegg is proof that there’s HUGE demand for online education stocks right now.