This great American boom is only beginning

What if I told you that US housing is one of the best money-making opportunities today?

After all, how can anyone think housing is a good bet right now… especially in the middle of a global pandemic?

Well, today I’m going to show you the facts.

You’ll see exactly why I’ve never been more excited about US housing...

And you’ll find out the best way to play this boom for maximum profits.

This past month, new home sales surged 55%—their biggest gain since 2005.

The number of Americans looking to refinance their mortgages jumped 111%...

And Quicken Loans—the US’s largest mortgage broker—just had its best quarter in its 35-year history.

In the first six months of 2020, Quicken funded a record $120 billion in home loans. It broke the record for its best lending year ever... with six months to go.

Bill Gates Calls This the Next Big Thing in Computing…

And get this… last month, the average home sale price spiked 6%. This marks 100 straight months of gains, according to the National Association of Realtors (NAR).

You’d expect these stellar growth numbers from a tiny disruptor having its “breakout moment.” Yet, we’re talking about America’s biggest industry!

Take first-time homebuyer Brett-Ashlee Ward for example. She put in offers for nine homes over the past three weeks in Oklahoma City.

She was beaten out by higher offers every time. Ward wasn’t lowballing. She offered above the listing prices and didn't ask the sellers to cover the closing costs.

But bidding wars are fast becoming the rule, not the exception in US housing.

Data from internet realtor Redfin (RDFN) shows more than half of buyers who purchased a home in the past three months were forced into a bidding war.

This won’t come as a surprise to longtime RiskHedge readers. As housing expert Barry Habib told me last year, “There is a chronic undersupply of homes in America.”

In fact, it would take less than five months to sell every existing home on the market, as you can see here: 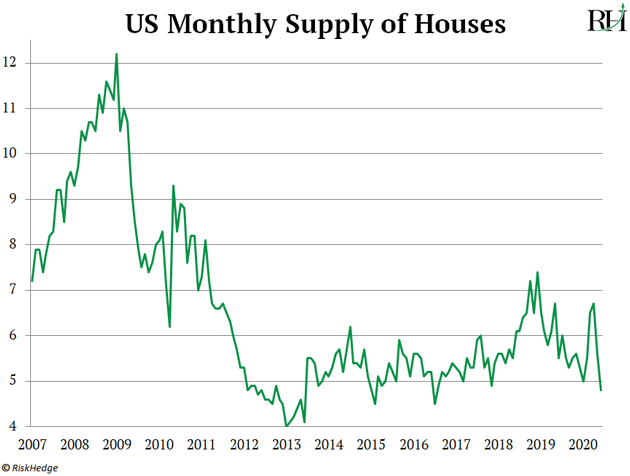 Scarred by the housing bust, homebuilders have been sitting on their hands for the past decade. Census Bureau data shows an average of 1.5 million homes were built each year since 1959. Yet over the past decade, just 900,000 homes have been built per year.

We have a serious housing shortage in America today. Millions of homeowners chose not to list their homes during the peak of the coronavirus… which has only “shrunk” supply further.

Today’s young adults, as you probably know, are called “millennials.” They’re the biggest generation in US history—bigger even than baby boomers.

But as I wrote last year, millennials aren’t kids anymore. This year, the average millennial turns 32.

And guess what the median age of a first time homebuyer in the US is?

According to NAR, four in ten homebuyers was a millennial in 2019. And recent data from Realtor.com found millennials’ share of mortgages surpassed 50% in the spring.

But every year for the next decade, tens of millions of millennials will hit home-buying age.

In other words, a whole generation of homebuyers will soon flood the market. At a time when there is a massive shortage of homes in America!

Remember, the most important driver of home prices is supply and demand.

Today, supply is tight. And with record numbers of house hunters entering the market, it all but guarantees the housing boom has YEARS left to run.

The cure for America’s housing woes is simple: Homebuilders MUST build more houses.

As I mentioned, builders have been very cautious over the past decade. But now they’re finally ramping up.

Coronavirus has been little more than a blip on the radar for homebuilders. Housing starts surged 17% in June as states began reopening.

And here’s the kicker… the shortage of available homes is allowing homebuilders to charge a premium. According to a CNBC survey, almost six in ten builders recently bumped prices up.

The bottom line is homebuilders are set to make boatloads of money in 2020… 2021… and beyond.

Builders dived along with the market in March. But now they’re ripping higher and are about to break out to new all-time highs. Check out the performance of homebuilder’s fund ITB. It’s up 100% in just four months! 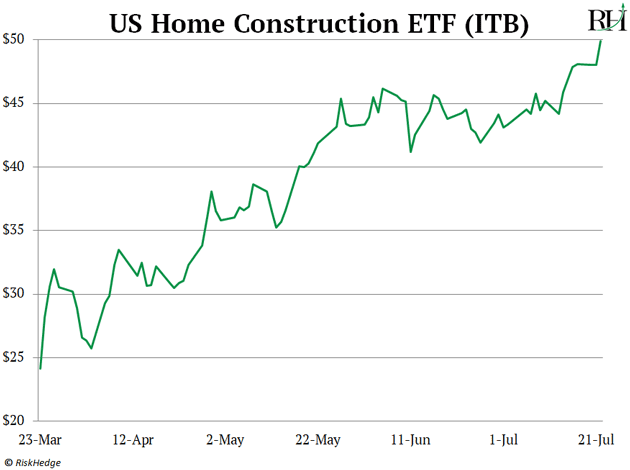 In short, this setup is handing us a slam-dunk profit opportunity. It’s time to pull the trigger on homebuilders as the US housing boom roars on.

Are you seeing a flurry of housing activity in your neighborhood? Tell me what’s happening in your local housing market at Stephen@Riskhedge.com.

What a week in the mailbag! Feedback is pouring in on last week’s RiskHedge Report: College is never coming back.

A few readers were quite offended by Stephen calling colleges “Socialist indoctrination centers."

What do you think?

Or cesspools of socialist misinformation?

Let us know at Stephen@Riskhedge.com.

"It’s great for kids... who’ll no longer be lured into the socialist indoctrination centers that many American campuses have become."

I attended three public universities in the 1990s. That was not my experience at all. This from a lifelong political independent.

I'm here for investment advice, not political venting. If I want incendiary right wing talking points, I know where to go. Statements like this will only drive away half of your subscribers. Stick to investing and leave the politics out of it, please. —Douglas

After paying tens of thousands of dollars to ensure my children received a "good education," (as indefinable and unquantifiable as that phrase may be), I guarantee I will be an investor in any company that changes the rules of the game in a way that benefits the American parent. The madness has to stop. —An Earnest but Frustrated Parent

P.S. My older son is not speaking to me because I refused to invest another $65,000 in a fifth year at this money-making machine passing itself off as a "university." As the world turns. —Thomas

This is a great article and a subject that my husband and I have discussed just recently. After putting three kids through college (although one a community college), we can see the end of huge college debt with online learning.

My husband has written articles to our local newspaper sharing his view that at least community colleges should be designed to train students in a vocation after two years and receive a degree in their chosen field. Every student will not become a doctor or a lawyer, etc., and two-year colleges could be the answer for students who could then make a living after two years instead of partying for four. —Carol

Online college may work for liberal arts courses, but I don't see how it is going to work for science and engineering courses that require labs. These labs typically have very expensive equipment and for things like chemistry labs they have hoods to carry away fumes.

You can't really do that at home. Also, if you kill off undergraduate courses and reduce the number of professors, how is any significant research going to be done. One thing that has made America strong is our research. —Herb

I agree 100%... sadly, the college system fleeced us for tuition for three kids before this gift of awakening. I’m happy for all those who will benefit from at least one good thing that came from this virus! —Barbara

I don’t usually give my thoughts on articles, however I have been espousing this for years. When I saw the quality of classes offered on Khan Academy, closely followed by the rise and societal acceptance of Phoenix University and Strayer style online degrees in both the government and private sectors, I knew this day was approaching. The fact that communist/socialist professors are making $300K+ a year while my daughter’s kindergarten teacher is fighting for $40K really makes me glad this is happening sooner rather than later.

I pay close attention to your financial advice and beliefs in fiscal trends and thank you for allowing myself and family to become financially independent before 50! —Koi