The boom nobody believes in

During the housing boom, Bill was often “turning around” 14 houses at once… with three crews of renovators working full time.

Back then flipping houses was the most profitable side-job in America. Buy a house… fit it with a new kitchen… sell it for a big mark-up... repeat.

The housing market melted down, and the average home lost over a quarter of its value.

Flippers went bankrupt when they got stuck owning rapidly depreciating homes no one wanted to buy.

Many ordinary Americans, who never intended to speculate on housing, were financially devastated too.

Some lost hundreds of thousands of dollars. Others lost their jobs or their businesses.

This all shocked millions of folks who believed the lie that US housing was a slam-dunk, can't-lose investment.

The housing crash was hands down the most financially disruptive event of the century. It scorched one thing into the minds of Americans: “I’ll NEVER get burned like that again.”

Housing is what I call a "hot stove" investment. It burned a whole generation of investors... and they’ll be damned if they ever touch that stove again. 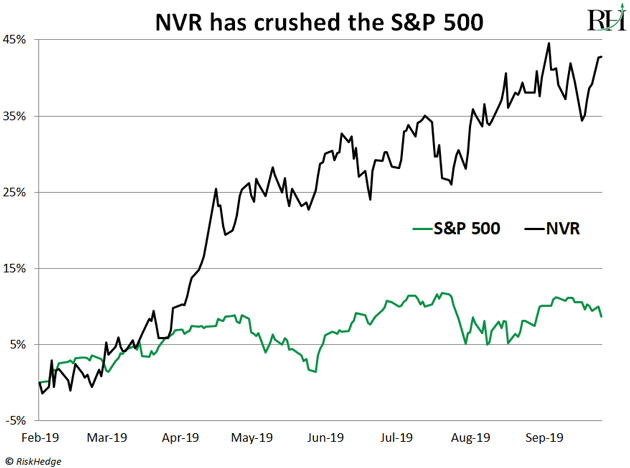 Readers who got in early have already made a bunch of money. But if you're not yet riding the trend with us, it’s not too late.

My research suggests this boom has years to run. Today I’ll show you another way to profit from it.

I picked up the phone and called housing expert Barry Habib.

If you don’t know Barry, he’s the founder and CEO of leading real estate advisor MBS Highway. Barry is an “insider’s, insider.” He spends his days talking to the biggest players in the US housing market. In short, he knows what’s really going on in housing.

Here’s what Barry told me…

“Stephen, you’ve been proven right on housing, and I think you’re about to be proven even more right. The most important driver of home prices is supply and demand. And right now, there is a chronic undersupply of homes in America."

As I said, the 2008 bust turned a lot of folks off from investing in housing. It shattered the confidence of homebuilders, too.

Census Bureau data shows an average of 1.5 million homes were built each year since 1959. Yet since 2009, just 900,000 homes have been built per year. In fact, less homes were built in the past decade than in any decade since the 50s!

We have a serious housing shortage in America today. It would take less than six months to sell every existing home on the market, as you can see here: 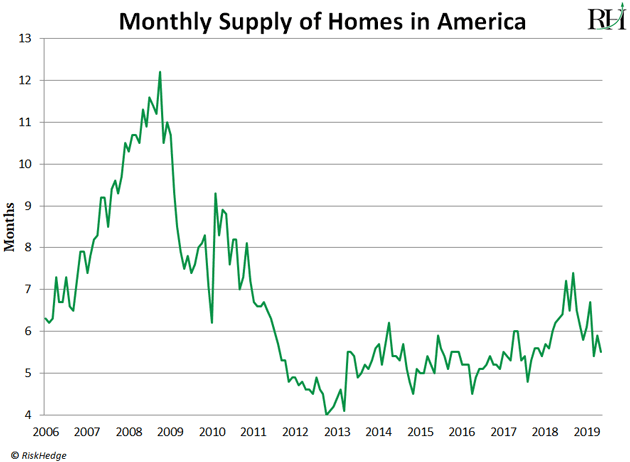 “On average, folks buy their first home at age 33. Guess what the median age of millennials is right now? 34.”

Today’s young adults, as you probably know, are called “millennials.” They’re the biggest generation in US history—bigger even than baby boomers.

There are a lot of rumors out there about millennials. They’re famous for living in their parents’ basements, delaying marriage, and earning less money than their parents did.

But as I explained back in June, millennials are finally growing up and buying houses. According to the National Association of Realtors, one in three homebuyers today is a millennial.

Barry emphasized we’ve only seen the tip of the iceberg so far:

… In the past year or two, the first wave of young homebuyers came into the market. But every year for the next decade, tens of millions of millennials will hit home-buying age.”

In other words, a whole generation of homebuyers will soon flood the market. At a time when there is a massive shortage of homes in America!

Remember, the most important driver of home prices is supply and demand. Today, supply is tight. And with record numbers of house hunters entering the market, it all but guarantees the housing boom will continue and likely accelerate.

Homebuilders HAVE to build more houses.

As I mentioned, builders have been super cautious over the past decade. Who can blame them? Many saw their friends and competitors go out of business when the market crashed.

But with the housing boom showing no signs of slowing, they’re finally getting to work.

This past month new home “starts” jumped to their highest level since June 2007.

And the number of building permits granted shot up to its highest level since May 2007.

This is all great news for my favorite homebuilder NVR. I expect it’ll continue marching higher.

But I’m going to give you a different idea to profit from this thriving market.

To tell you the truth, it’s boring.

Not exactly the next Amazon or Netflix, right?

But as you can see here, these boring stocks have ripped over the past 12 months. 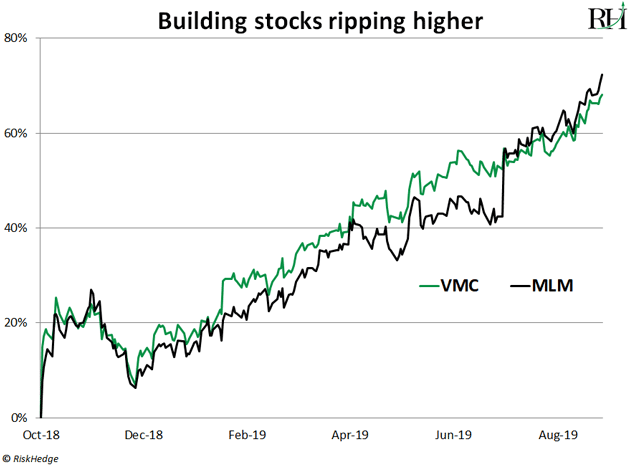 But their revenues are hitting all-time highs as homebuilders construct new neighborhoods.

I’ll say it again: The American housing boom has years to run. The best time to buy housing stocks was earlier this year when I first wrote about it. The second best time is right now!

If you’re not invested in this trend yet, now’s the time to put your money to work in any of the three “hot stove” stocks I mentioned that most folks won’t touch.

Do you enjoy the RiskHedge Report? If so, please pass it along to anyone who’s interested in the markets and in disruption.

Talk to you next week,

You sent in dozens of letters in response to my article about disrupting America’s most broken industry. Here are a few:

Stephen, you are right, healthcare is so opaque. I can’t even tell MY patients how much something will cost them. No idea, other than "way more than you want to spend.” (I’m an ER doc.)

And yes, I would get an x-ray or a flu shot at Wal-Mart, absolutely.

I am a retired doctor. I was in private practice for almost 30 years. I think the current healthcare system is a disgrace. There is absolutely no transparency, and the billing of services in most cases either borders on fraud or is outright fraud. Hospital billing and many physicians play a game to code services only to maximize reimbursement.

Glad someone is trying to disrupt this industry. It is badly in need of change.

Hi Stephen: I'm a paid up subscriber and love your work. Congratulations. Finally, someone is going to disrupt the healthcare industry. I worked in corporate America for years and had great insurance. Then I ventured out on my own and am now on a pre-Obamacare high-deductible plan. I pay $1,200 monthly for a family of five, and my max-out-of-pocket is around $30k per year... It is truly a catastrophic plan in more than one sense of the word! YOU BET I'll be going to Wal-Mart for healthcare, or anyone else for that matter who busts up this anti-competitive system!

Keep up the good work.

Stephen, I am Canadian, and we have public-tax-funded hospital and doctor expenses, but private health insurance covers prescriptions, glasses, and teeth. I work in this industry as a plan sponsor consultant and see first-hand that it’s broken the same way you describe the US health insurers. So yes, disruption of health care is coming now. And will be hugely pushed back by the pharma industry worldwide, and doctors and hospitals in the US.

Hell yes! have had shots at CVS and Walgreens. Originally hospitals were a place to go to die. With infections and incompetence, that still applies, plus they charge you a fortune for things that really cost very little. Stay clear of hospital interactions.

Yes! I would absolutely go to Walmart-Health for a flu shot.

I would use Walmart-Health in a heartbeat.

Fascinating perspective on Walmart as a healthcare disruptor. I believe it. We get our flu shots at CVS and vision care at Walmart or Target. Already invested in CVS and WMT.