The disruption that handed investors 2,718% and 1,066 gains is repeating itself

Stephen’s note: I’m holed up here in Ireland with my wife and daughter, working from home.

We’re safe, but we’ve had to split my big family into “subgroups” to protect my elderly relatives from catching the virus. I’ve been doing shuttle runs to the grocery store to help older folks in my neighborhood stay stocked up. We set up a makeshift “quarantine room” in our house where we remove our shoes, jackets, and anything that could carry the virus.

I’m lucky to have a home gym where I can work out; everything is closed here. Even the pubs on St. Paddy’s day... which is a first for Ireland. The pubs even stayed open here during World War 2.

I will say, its been nice to see my daughter more since I’m working from home.

I hope you and your family are getting by okay. Let me know how you’re doing at stephen@riskhedge.com. With your permission, I’ll post your answers in a “mailbag” so we can all stick together and benefit from each other’s stories.

You turn to me for investing guidance. There are two big “don’ts” I’ve been telling all my friends, family, and anyone who’ll listen.

One, don’t panic. And two, don’t let the crazy swings blind you to the incredible opportunities that this market washout is creating.

Because this will all pass. And investors who place the right smart bets today—with many stocks at historically cheap levels—will be first in line to profit.

Below, I’ll tell you about the hands-down smartest bet you can make today...

The disruption that handed investors 2,718% and 1,066 gains is repeating itself

Do you remember when Facebook CEO Mark Zuckerberg was grilled by US Congress in late 2018? Politicians from both sides of the aisle interrogated him for ten hours.

Senator Orrin Hatch demanded to know how Facebook keeps the lights on when it’s free to use.

Zuckerberg answered Hatch with a smirk on his face:

“Look, there’s a reason $250,000 Ferraris are parked up and down New York’s Madison Avenue, the advertising capital of the world. Advertising is lucrative. It secretly made Mark Zuckerberg the fourth richest guy on earth. It secretly made the founders of Google, worth a combined $113 billion.”

Google (GOOG) and Facebook (FB) have handed investors incredible gains over the past couple of years. 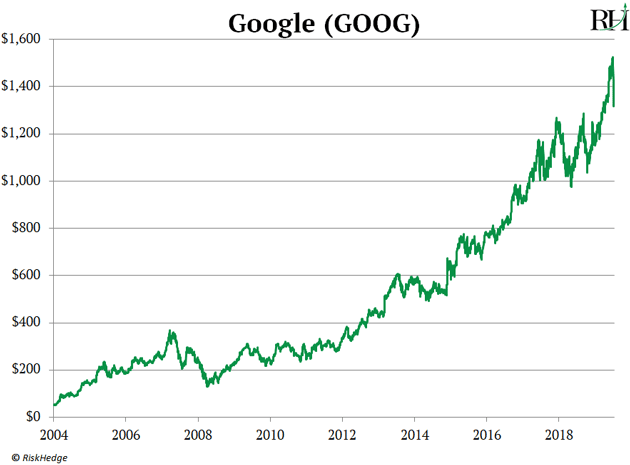 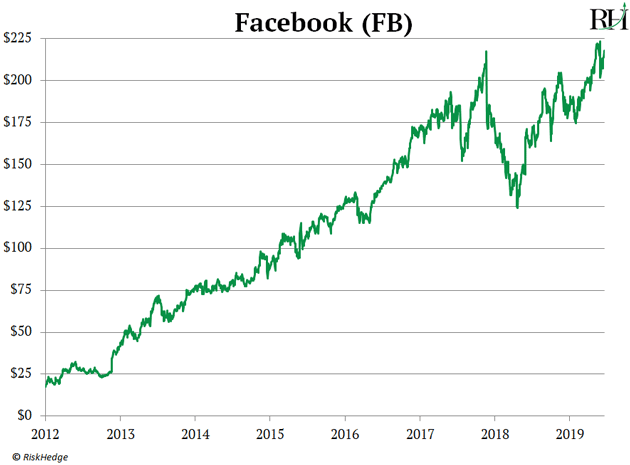 These businesses made shareholders rich by selling ads.

Of course, advertising existed centuries long before Google and Facebook sprouted up.

So what made them so successful?

They kicked off a tectonic shift in advertising... completely flipping the industry on its head.

In fact, 90 cents out of every ad dollar flowed through these mediums in 2000!

Yet, as I’ve been telling you, traditional advertising is “hit or miss.” One ad… that goes to everyone… with no way to analyze the data. With the old “scattershot” approach, advertisers can’t target the right audience.

For years, it’s been an extremely ineffective approach.

But then Google and Facebook invented the “holy grail” of advertising.

As you likely know from surfing the internet, computer programs learn over time what you’re interested in.

If you’re a dog lover, they’ll show you ads for dog treats and leashes. If you write an email to your golfing buddies, next thing you know an ad for a new set of golf clubs is following you around the internet.

And it allows advertisers to show different people different ads.

Google and Facebook invented this technology and brought it to the world.

And it’s the driving force behind their incredible success.

Not only that, but this force is now stronger than ever.

In 2000, less than 3% of ad dollars was spent on dynamic ads on the internet.

But in 2019, advertisers ploughed more money into dynamic ads than traditional ads! You can see this tectonic shift here: 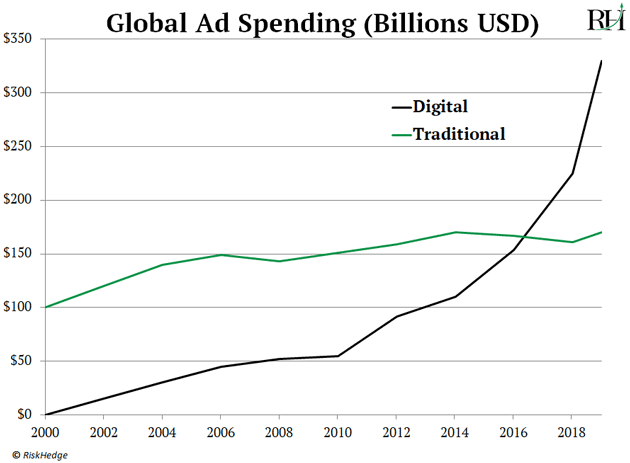 I want you to pause and think about that for a second.

And Google and Facebook grabbed more than $170 billion of it!

According to eMarketer, they now collect more advertising dollars than all TV networks... all radio stations... all newspapers and magazines... and all billboards... COMBINED!

In fact, they are the greatest generators of ad dollars ever.

According to Reuters, 98% of Facebook’s revenue comes from selling ads.

In short, Google and Facebook invented—and then captured—the dynamic ad market… becoming the fourth and fifth richest companies on earth in the process.

Now, maybe you struck it rich off these stocks. Or maybe you missed out.

Either way, a new opportunity to profit off dynamic ads is here.

One that could prove to be even more lucrative than Google and Facebook.

As I said, these businesses pioneered dynamic ads online. And it transformed into world dominating disruptors.

But you read the RiskHedge Report to find out TODAY’s opportunities.

And as I’m writing you, a tiny disruptor is emulating their success… in streaming.

We’ve talked a lot about the “cord cutting” craze over the past few weeks. As a reminder, Americans are dumping cable at the fastest pace in history.

In fact, more households now subscribe to a streaming service like Netflix and Disney+ than pay for cable!

An estimated 400 million people worldwide watch streaming videos. But there are virtually no ads!

In other words, hundreds of millions of “eyeballs” have moved to streaming... but almost all the TV ad dollars are still stuck on cable!

As Chris Wood pointed out on Tuesday, just $6.9 billion was spent on streaming ads in 2019. Compare that to $170 billion for cable TV advertising across the globe.

The reason few ad dollars have shifted into streaming is because the technology didn’t exist.

Remember: Dynamic ads online were totally irrelevant in 2000. They made up just 3% of ad spending. Then Google and Facebook created the tech that allowed advertisers to show dynamic ads, and spending soared 150x!

A tiny disruptor is bringing the millionaire-minting power of “dynamic” commercials to streaming for the first time ever.

And it’s set to become the “Google” of streaming as its bleeding-edge disruption causes $170 billion to shift hands.

This tiny superdisruptor is flipping this on its head. It’s disrupting ads just like Google and Facebook did.

And it’s set to capture a big chunk of the profits.

And $10 is all you need to get in before the March 30 trigger date.

But things are moving fast for this tiny stock. That’s why Chris just dropped everything to put together an urgent briefing on this opportunity, which RiskHedge readers can view for free here.

If you’re interested, don’t delay. We have to take down this video tomorrow. Go here to get the full story now.