The dangerous side of “safe” stocks

One of the most important things money can buy is safety.

Even though it might mean stretching your finances and borrowing a ton of money, most American families would choose to live in a safer area.

The financial sacrifice is worth it because feeling unsafe is miserable. It ruins your ability to concentrate. It preoccupies you and stresses you out.

It’s hard to be an effective person when you’re worried your kids aren’t safe.

So we buy cars that win safety awards. We install expensive security systems. We pay the military billions to safeguard the country.

The thought of losing 20% of your nest egg in the market can be scary. For many folks it’s just as gut-wrenching as the thought of a stranger breaking into your house at night.

So investors often pay giant premiums for stocks they believe to be “safe.”

No matter what happens in the markets, we’ll always brush our teeth, wash our clothes, and clean the dishes.

Selling necessities is a rock-solid business. From 1982­–­2012, Procter & Gamble grew its sales 28 out of 30 years. This consistency is why P&G has long been considered one of the safest stocks on earth.

P&G trades for roughly 25X its profits. That’s very expensive for a business that’s seen profits drop 20% over the past decade. For reference, the average S&P 500 company trades for 21X profits.

For decades, P&G stock has held up its end of the deal.

As you surely know, online giant Amazon has put dozens of companies out of business in the last few years. Through selling stuff online for low prices, it has disrupted iconic brands like Toys R Us, Sears, Circuit City, and RadioShack into bankruptcy.

You can see Amazon’s incredible gains on this chart. 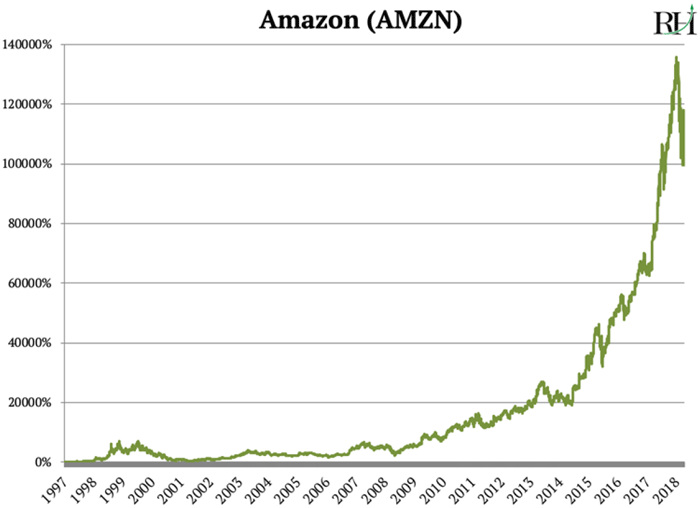 Over the past three years, Amazon has launched more than 100 of what it calls “private label” brands.

They are Amazon’s own products, sold under different names.

The key is Americans are buying more and more essentials online. The fastest-growing category on Amazon is food staples—like breakfast cereals. Personal care products like soap and toothpaste are a close second.

Amazon raked in roughly $7.5 billion through selling its private label products last year. Research from investment firm SunTrust suggests this will climb to $25 billion by 2022.

Over 100 million Americans pay $119/year for Prime membership. Prime is Amazon’s subscription service that gets you free delivery.

As part of Prime, Amazon offers a program called “Subscribe & Save.” In short, it lets you create an automatic subscription to thousands of products.

You simply ask Amazon to send you laundry detergent monthly… and a container of it will show up on your front porch at the same time every month.

Amazon has spent billions developing these so-called “frictionless” services. The idea is to make it so quick, easy, convenient, and cheap to get basics through Amazon, you’ll rarely bother going to stores anymore.

Instead of ones made by other companies like P&G.

Log onto Amazon and see for yourself. It now features its own private label products prominently at the top in almost every category.

And if you order by voice—through Amazon’s Alexa device—Amazon automatically sends you Amazon brand products.

Make no mistake… Amazon is marching in on the territory of formerly safe stocks like Procter & Gamble.

My research suggests it will gradually suck the life out of these companies as more and more “essential” purchases move online.

As the 15th largest publicly traded company on earth, it has the most to lose.

But its “safe” peers face the same big problem.

Unilever (UN), which owns household brands like Axe deodorant and Dove skin care, has seen its sales sink below 2001 levels.

All three of these stocks trade for higher than 20x profits.

Their businesses are not growing…

Their stocks are expensive…

And the most disruptive force on the planet—Amazon—is invading their turf.

Does that sound like a safe place to put your money?

That’s it for this week.

Have you tried Subscribe & Save from Amazon? Tell me at Stephen@RiskHedge.com.

RiskHedge reader Ethan has a question about my 5G “landlord” essay.

I'm a subscriber and work in Silicon Valley as a software engineer. I have two questions about Crown Castle (CCI):

1) There seems to be a lot of local opposition to small cell deployments. Do you think it will impact growth?

2) SBA Communications (SBAC) got out of the small cell business back in 2015. Do you know why they made the move? And do you think that reason would be a valid argument to NOT invest in CCI?

Ethan, thanks for your questions.

As I explained a few weeks back, the US government is determined to beat China in the race to develop 5G. Certain state and local governments have slowed down 5G deployment by tangling it up in red tape. But the FCC’s recent passage of its 5G “FAST” has cleared up most of this interference.

SBA sold their small cell business because they weren’t making money on it. As I mentioned, it was taking some local governments 800 days just to process applications for small cell towers. But since the FAST plan took effect, small cell towers are going up 6x faster than before.