What’s the biggest public company in the world?

But with a $1.04-trillion valuation, Microsoft (MSFT) is king. 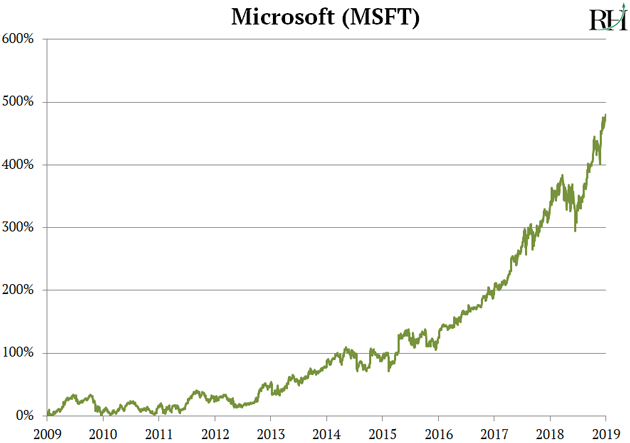 Microsoft achieved this by creating one of the best-selling products ever: Microsoft Windows.

This will probably shock most Mac fans out there...

But roughly 19 in every 20 computers sold in the past three decades run on Windows.

Windows, as you likely know, is the operating system that made computers useful to the average person.

An operating system is like the “brain” of your computer. It “talks” to the keyboard, monitor, mouse, etc.—and tells them what to do.

Every carmaker on earth is ploughing billions into self-driving cars.

But when it comes to driverless cars, traditional carmakers are way out of their depth.

Think about it… General Motors and Ford know how to do one thing really well: mass produce cars.

Developing self-driving cars is all about teaching a computer to drive better than a human. It’s a totally different challenge that carmakers are just not very good at.

As we’ve talked about, self-driving cars must reliably detect and interpret everything around them.

They’re already great at recognizing obvious things like stop signs, pedestrian crossings, and red lights. When it comes to “invisible” hazards like black ice, the tech has a ways to go.

The breakthrough making driverless cars possible is a centralized computer “brain” that learns from every mile driven. It then talks to the engine, brakes, headlights, and windshield wipers and tells them what to do. Just like Microsoft Windows tells your mouse and keyboard what to do.

These are three of the world’s biggest carmakers…

They’ve spent billions of dollars trying to develop their own driverless systems.

Yet a couple weeks back they signed a licensing deal with self-driving leader Waymo to use its technology in their cars.

Waymo cars have clocked over 12 million miles on the roads of Arizona and California.

That’s more than all other companies combined.

The thing is, Waymo hasn’t built an actual driverless car. And it probably never will.

Instead it orders vehicles from Fiat Chrysler (FCA)… then fits them with its self-driving hardware and operating system.

As I said, auto companies are great at building cars. But to crack the driverless code, you need a whole different set of skills.

It’s similar to the problems faced by computer makers like IBM (IBM).

IBM built great computers. In 1993, it was the largest company on earth. Had you bought its stock in late 1993 and held on through today, you’d be sitting on a 880% gain.

Making 8X your money is a solid profit. But if you’d owned Microsoft, you would’ve 50X’ed your money as it soared 5,420%.

Waymo is developing the “Microsoft Windows” of cars. Whether you buy a Ford… a Chevy… or a Nissan… they’ll all be running on its operating system.

This is a genius move by Waymo. As you may know, making cars is a terrible business. Carmakers are lucky to eke out a couple pennies of profit for every dollar in sales. For example, for every $30,000 car Ford sells, it costs $29,000 to make, sell, and market the car.

I estimate it can license out its technology to automakers for, say, $2,500/car. There are 275 million cars in America alone.

Do you see how HUGE Waymo’s money-making opportunity is?

And it goes far beyond cars. Waymo is also developing technology to operate driverless trucks. I expect it’ll eventually license that tech to the likes of UPS (UPS) and FedEx (FDX), which each own hundreds of thousands of delivery trucks.

I’ve shared this with you before. Please look it over again, because it’s so darn important.

As you’ll see below, Waymo cars have driven more driverless miles than all competitors combined: 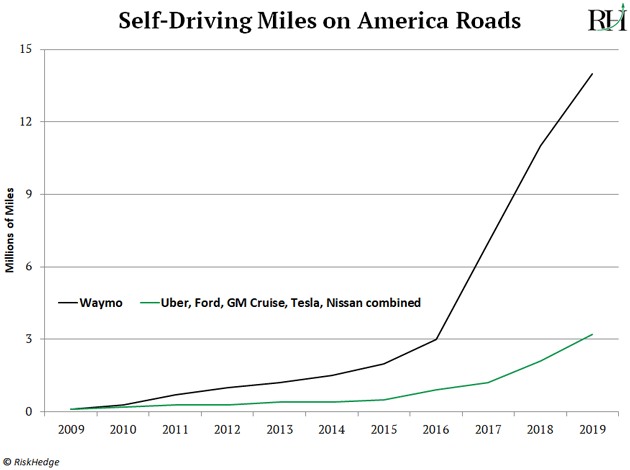 As you can see, Uber (UBER), Tesla (TSLA), GM, and others are also working to build self-driving cars.

But they lag at least 2–3 years behind Waymo.

Take GM’s self-driving unit, Cruise, for example. Recent data shows its operating system failed every 3,000 miles or so. “Failure” means a human driver had to take control of the steering wheel.

Waymo beat this milestone more than three years ago.

Waymo’s nearly perfect safety record is why it’s the only company to be granted permission to operate fully driverless cars in California.

And Waymo is the ONLY company on the planet with a fully-functional self-driving taxi service. As we’ve talked about before, it’s fully driverless robo-cars are taxiing folks around Phoenix, Arizona every day.

Investment Bank UBS estimated the self-driving car market will be worth $1.2 trillion by 2030.

Whatever you think it’s worth, please know this...

The stock market is completely ignoring this opportunity.

If Waymo were a standalone company, it would be the hottest stock on Wall Street.

It’d easily be worth $125 billion—which is more than Starbucks (SBUX), Nike (NKE), and American Express (AXP) are each worth.

Within a couple years, Waymo will be raking in billions of dollars from licensing its technology to carmakers.

Not to mention its huge opportunity as it expands its robocar ride-sharing service. Within three years, that should rake in roughly another $10 billion a year.

That’s it for today. Before you go, let me ask you a question...

As you may have seen, the US stock market hit an all-time high last week.

Brittany asks about my latest Netflix (NFLX) article on Forbes that over 3.3 million investors stopped by to read:

“Don't you see all of the new streaming services as shooting themselves in the foot by severing ties with Netflix? The benefit Netflix offered them was revenue coming in without much hassle. The consumer was able to watch what they liked from multiple sources all in one place.”

Brittany, thanks for your reply.

You’re right, Netflix bringing lots of different content all under one roof was a great deal for subscribers. But it was a terrible deal for Disney and other content creators in the long run.

As background, Disney content essentially MADE Netflix. Disney signed a deal with Netflix at the end of 2012 that licensed all its best content to Netflix. Everything from Star Wars to Marvel to all its kids’ content went on Netflix.

It was similar to how book stores initially outsourced their online sales to Amazon. At first, it was nice to offload responsibility and make some extra money from selling books online. But as you know, it led to Amazon putting most bookstores out of business.

Disney isn’t making that mistake. Its Disney+ service will be a huge hit when it launches in November.