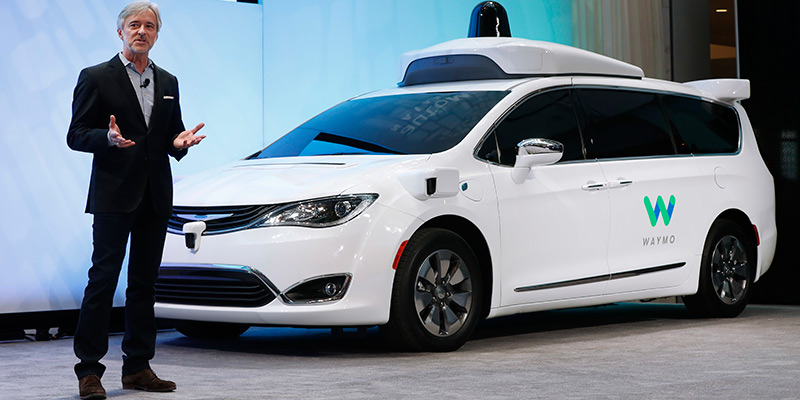 How do you teach a computer to “see?”

By 2012 technology had advanced a great deal. For 199 bucks you could buy a tiny supercomputer called the iPhone 5.

You could talk to it—and it would talk back. It could hail you a cab or give you driving directions or play a movie. All of which would stun a person living just five years prior.

But computers were still laughably bad at recognizing images.

Take a look at these pictures: 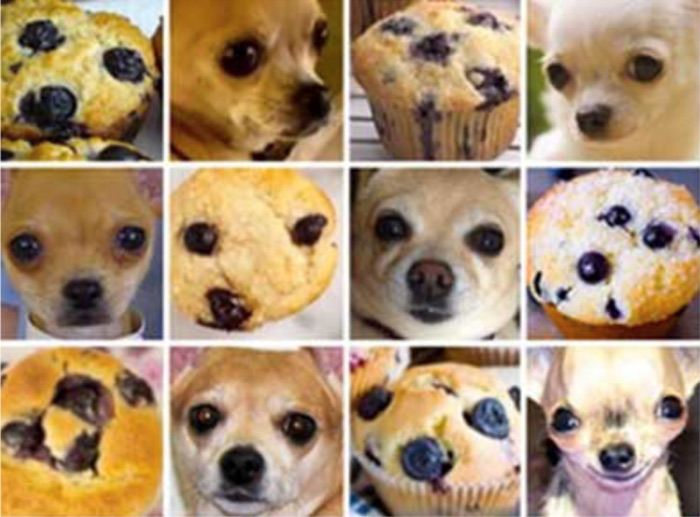 A toddler could tell you half of them show a chihuahua dog, and the other half show a blueberry muffin.

But in 2011, researchers showed them to the world’s best image recognition computer and asked it “is there a dog in this picture?”

The top performer got it wrong 28% of the time.

While “seeing” is second nature to humans, it’s extremely difficult for computers. And if the top computer couldn’t even tell a dog from a baked good, there was no hope for a technology like self-driving cars that required computers to see.

But in 2012, after 50+ years of failing, researchers finally cracked it.

Today the best computer gets it right over 95% of the time... which is better than the average human eye.

For the first time ever machine learning enables computers to learn without human intervention.

It works by processing massive amounts of data. Show a computer millions of pictures of a stop sign, for example, and it can learn to recognize stop signs on its own in the real world.

Because of machine learning, computers can now learn from their experiences, just like humans. And it’s allowing them to perform tasks once thought impossible…

We last discussed self-driving cars in August. I mentioned Google’s (GOOG) subsidiary Waymo was testing its robo-taxis in Arizona.

At the core of Waymo’s self-driving car fleet is a centralized “brain.” It learns from every mile driven by every Waymo car.

It’s taught itself to recognize stop signs, pedestrian crossings, red lights, and all the other obstacles human drivers navigate.

And get this: Waymo officially launched the world’s first self-driving, ride-sharing service last Tuesday! Residents in four Phoenix suburbs can now ride around in its robo-taxis for a small fee.

Recently I explained why self-driving cars are going to gut the auto industry like a fish. Phoenix is only the first step in Waymo’s domination of American roads.

Waymo’s cars have driven 11 million miles already. And they’re clocking up roughly 1 million more every month. Based on Department of Motor Vehicles data, its five biggest rivals have only covered about two million miles combined.

Waymo is crushing them, as you can see from this chart: 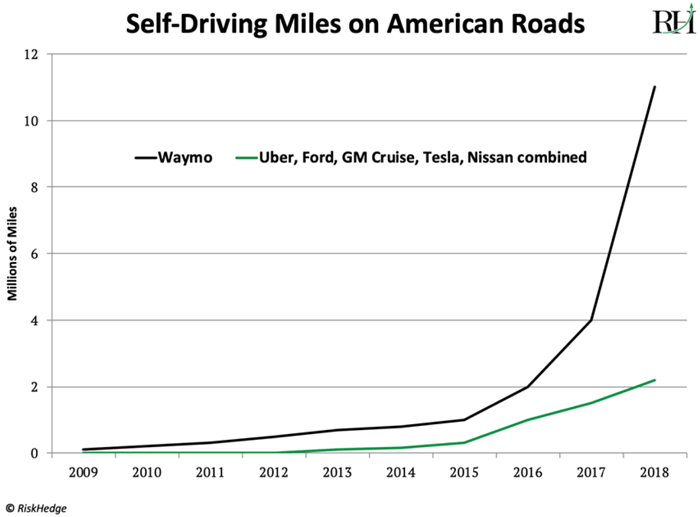 Right now Waymo is running tests in 25 US cities. And it’s the only company allowed to test fully driverless cars in California because of its first-class safety record. My research suggests Waymo is at least three years ahead of its peers.

By far the biggest cost of operating a car today is paying the driver. Roughly 80% of the money Uber takes in through fares goes to the drivers.

Waymo’s self-driving cars slash this to near zero, so it can offer a far cheaper service.

This is Waymo’s BIG opportunity.

According to the Department of Energy, around 60% of all car trips in 2017 were under six miles.

Whether dropping the kids at school, commuting to work, or buying groceries… these short trips are ideal for ride-sharing. But who wants to pay $10 each way for an Uber?

In the not-too-distant future, depending on where you live, you’ll be able to grab a Waymo for a fraction of what Uber costs.

Robo-taxis will save thousands of lives a year at a minimum. Once governments figure this out, they’ll be begging Waymo to come to their city next.

BUT… Waymo understands a single fatality involving its cars could set it back several years.

That’s why it’s put safety front and center. Ahead of last week’s launch, it hired the former chair of the National Transportation Safety Board to become its chief safety officer.

It’s cozying up to local governments too. It’s partnered with Phoenix’s public transport to connect people with the city’s bus and rail services. It’s also bringing retirees to Walmart to buy their groceries.

Making self-driving cars a success isn’t just about the technology. It’s also about gaining public trust. Waymo leads the way in both.

That’s important because Waymo’s technology comes from Google. It uses Google’s machine-learning tools to teach its centralized “brain” how to drive.

This gives it a gigantic advantage over its rivals. You see Google is the unquestioned leader in machine learning.

Over the past decade it’s spent four times as much in this space as anyone else. Along with teaching computers to drive, it used machine learning to slash costs in its data centers by 30%.

Analysts at Morgan Stanley value Waymo at $175 billion today. But because you can’t buy Waymo stock individually, investors are completely overlooking its potential.

Google trades at 22 times forward earnings today, its lowest valuation in over a year.

That’s a fair price just for its core business, which as you probably know, holds a near-monopoly on the internet search market. 92 out of every 100 internet searches flow through Google.

In other words, buying Google stock at today’s prices is a bit like getting Waymo for free.

I recommended buying Google at $1,070 a few weeks back. It’s trading right around there today, and it’s still a strong buy.

Would you be comfortable getting in a self-driving car? I want to hear from you at stephen@riskhedge.com.

Just read your article and The Great Disruptors report. It sounds like Fortinet (FTNT) might be offering something that Booz Allen Hamilton (BAH) doesn’t have.

I'm reading up on both, since I know little about cybersecurity, but your take on the comparison of the two would be appreciated.

Andrew, you’re correct in saying Fortinet offers something Booz Allen Hamilton doesn’t. But the opposite is also true.

Think of it like this… you can split the cybersecurity market in two: private business and the US government.

Fortinet provides cybersecurity services to private businesses. Its Security Fabric platform is designed to insulate companies from hacks and breaches.

On the other hand, Booz Allen helps the US government solve its toughest cyber problems. The US government knows it can’t afford to fall behind in the cyber arms race. It will continue to pay Booz Allen handsome sums of money to keep its networks secure and its cyber capabilities ahead of America’s enemies.