Stephen admits: “I was wrong”

“The whole thing was disgraceful… One big publicity stunt.

The worst part? It distracted America from the REAL story.”

I was chatting with Stephen McBride yesterday about the “circus of a hearing” that recently went down in Washington, DC.

In case you missed it, the CEOs of Amazon, Apple, Google, and Facebook—four of the biggest companies on the planet—were grilled by Congress. Everyone wants to know: Do these companies have too much power? Should they be broken up?

The look on the CEOs’ faces says it all. Have you ever seen a sadder looking group of billionaires?

But according to Stephen, it was little more than a witch hunt. And the one company that most deserved to be scrutinized was nowhere to be found...

This hearing was a total joke. It distracted America from the most important story in all of tech. A story that will likely define the next decade of disruption.

If Congress was really doing its job it should have grilled computer chip giant Intel (INTC).

Intel just let Taiwan Semiconductor (TSM) surpass it as the largest and most important semiconductor company in the world. This is huge… and no one’s talking about it.

If you’ve been reading the RiskHedge Report, you know how important semiconductors are. They’re the “brains” of modern electronics. And they power today’s biggest megatrends like computer vision, 5G, and AI.

For years, Intel dominated in semiconductors. It always developed the most cutting-edge chips on earth. But now, Taiwan Semiconductor (TSM) is officially #1.

Intel, once “untouchable,” is falling fast.

Last month, it disclosed that it had fallen behind again on its next big chip-manufacturing technology. The pushback of its prized “7-nanometer chips”—supposed to be the tiniest, most powerful chips ever made—sent the stock tumbling.

Intel has now dropped to the fourth largest semiconductor company in the world, behind TSM (1), Samsung (2), and US-based Nvidia (3).

As you can see below, TSM (black line) has soared 54% over the past three months… while INTC (green line) has dropped 22%. 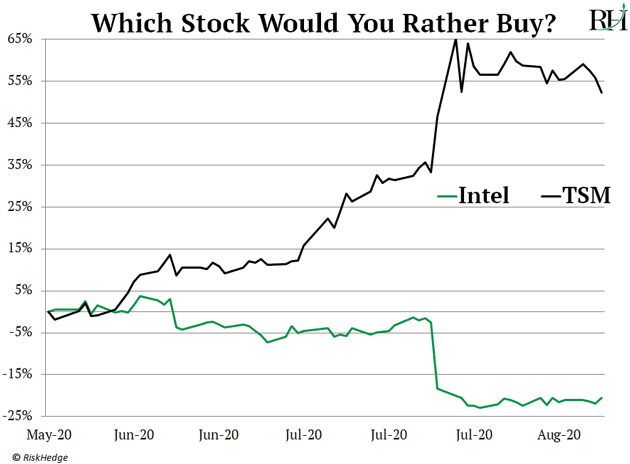 Stephen says TSMC is now the most important company in the world.

But RiskHedge’s microcap expert Chris Wood recently discovered a tiny silicon valley company that could help the US regain its dominance.

It pays to listen to Chris when it comes to small “semi stocks.” He recommended Nvidia (NVDA) back in 2013, before it was a household name and before it soared 1,640%.

Could his new recommendation follow a similar path? In short, this tiny startup has made a key breakthrough in semiconductor technology. All the big names like Taiwan Semiconductor and Intel are dying to get their hands on it.

But the most exciting part of this story? It’s about to announce a landmark royalty deal that could 109X its annual revenue in an instant.

Chris says this deal could happen as soon as tonight. Go here to see how you can take advantage before the cat’s out of the bag.

What a month for telehealth!

If you’re like most Americans, you’ve probably experienced your first “telehealth visit”…

Telehealth—firing up a laptop and “visiting” your doctor virtually—is one of the hottest trends on the planet.

And it just got hotter:

A couple of weeks ago, President Trump signed an executive order to expand access to telehealth services in rural communities.

(If Livongo sounds familiar, it’s because Justin Spittler recommended the company to his IPO Insider subscribers back in February, long before the mainstream media started covering it. As of this writing, it’s up 399%.)

The blockbuster deal sent shockwaves across the entire healthcare industry.

Stephen says the new company instantly becomes one of the most important healthcare companies in America.

Teledoc now has a monopoly in one of the fastest-growing industries. Everyone will flock to its platform because there really isn’t any true competition.

Investors should consider buying Teledoc today for the long haul.

And Stephen admits he was wrong about this trend:

Before COVID, I wasn’t sure telehealth had much potential. This pandemic has totally changed my mind. Telehealth is truly the only option out there for millions of folks who can’t risk visiting a doctor’s office during a pandemic.  Add to that Trump’s new order, plus this blockbuster deal… and it makes investing in telehealth a no-brainer.

I’m one of those who just tried telehealth for the first time. My wife and I called up the doctor last week to ask about a “rash” on our six-week-old daughter.

Turns out it was just baby acne… but the point is the process was quick and easy. We got peace of mind in 20 minutes flat... and avoided the time-consuming and stressful adventure of taking an infant to the doctor during a pandemic.

We’ll end today with a question for Justin Spittler, whose subscribers have enjoyed some triple-digit winners over the past few months.

One of your recommendations was recently downgraded by Bank of America. Should we consider selling?

Thanks Francine. To be blunt, Wall Street stock ratings are a joke. You’re better off ignoring them. Big Wall Street banks have a long track record of being laughably wrong on stocks.

Consider this “upgrade” by JPMorgan in June...

In other words, this price target by JPMorgan helped no one.

I could provide countless other examples like this. My point is, the major Wall Street banks are not there to help individual investors make money. In most cases, I give them zero weight when analyzing stock.

That’s all for this week. Write me at chrisreilly@riskhedge.com and let me know which moneymaking opportunities you’d like to hear more about!