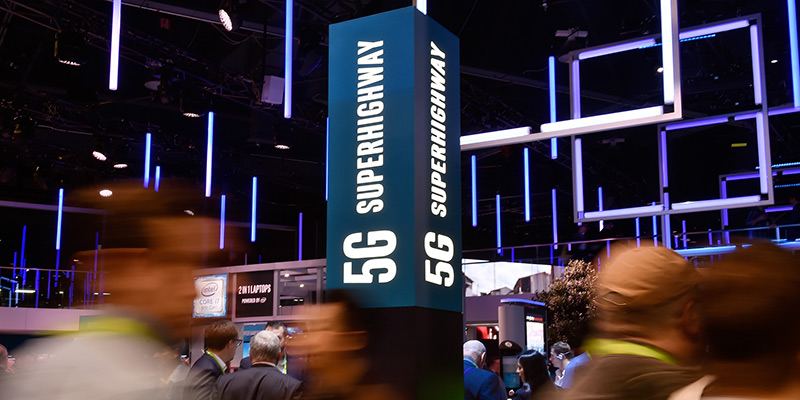 The Most Disruptive Event of the Decade Is Here

Remember when you couldn’t watch videos on your phone because the internet was so slow?

4G stands for “Fourth Generation Wireless Technology.” Most smartphones run on the 4G cell network today. But getting it up and running wasn’t cheap.

The cost of building out the 4G network hit $200 billion in 2015. Around 200,000 cell towers were built to broadcast the 4G signal that blankets most of America today.

The chart below shows the performance of AMT from 2011, when the 4G buildout started. As you can see, it has soared 185%: 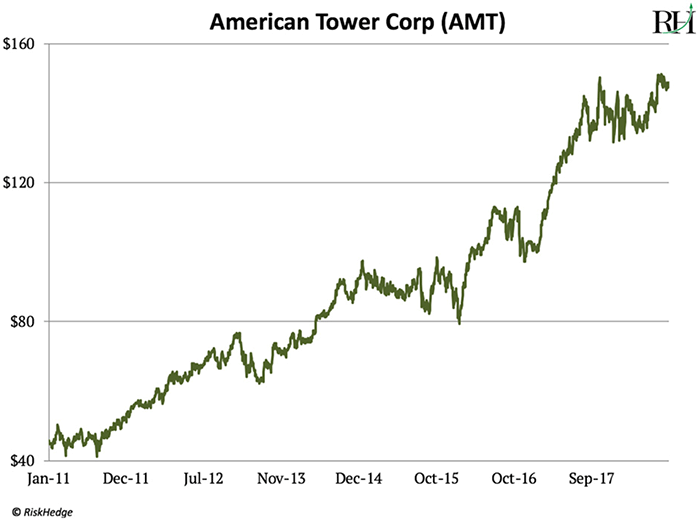 And that’s only the start.

No phone, computer, or modem on the market today is 5G “ready.” Which means EVERYTHING needs an upgrade.

I’m going to tell you about the company that’s developed the first 5G chips and antennas for phones. The world’s biggest network providers and device makers like T-Mobile, Verizon, and Apple are already scrambling to secure access to its products so they can participate in the 5G revolution.

You couldn’t access the internet on 1G. You could only make calls. And you had to make them from cell phones the size of a brick.

Roughly every 10 years since then, a new network has gone live. 2G, 3G, 4G…  each brought faster speeds and opened up more uses. The most recent one, 4G, went live around 2011.

5G will be lightning fast—with wireless speeds up to 20 gigabytes per second. That’s 1,000x faster than what we have today. It’s even faster than what you can get using physically wired internet connections.

5G will open up a whole new universe of possibilities. It’ll take just seconds to download a full season of your favorite TV series on 5G.

But that’s just scratching the surface. 5G’s nearly instant data transmission will make driverless cars possible. And doctors will be able to perform surgery from 1,000 miles away using robots connected through 5G.

And a 5G signal can only reach 1 kilometer… or about 4 city blocks. Compare that to a 4G signal, which can reach up to 70 kilometers.

For this reason, 5G will require the biggest revamp of America’s wireless networks EVER.

4G required tall cell towers to blast signals over long distances. 5G will need hundreds of thousands of smaller towers. These small towers are about the size of a trash can…and soon there will be one on almost every street corner.

5G will run on a new frequency that’s never been used before. This is very important, because it means every phone and computer will need new antennas and chips to connect to 5G.

In other words, we’re all going to have to throw away our phones and buy new ones to get on 5G.

This is why the GSM Association, which represents 800 of the world’s largest mobile operators, says companies will have to spend $500 billion in the next two years to get 5G ready.

Not many people know this, but QCOM owns the cell phone service known as CDMA. It’s the technology underpinning wireless networks that allows your phone to send and receive data. If you’re a customer of Sprint, Verizon, or Virgin Mobile, your phone runs on it.

Around 75% of QCOM’s profits come from its near monopoly on both 3G and 4G network patents. With a portfolio of more than 130,000 patents, QCOM can charge device makers like Apple and Samsung a licensing fee of up to 5% of the price of each phone they sell.

QCOM collected $6.44 billion through its licensing segment last year. This business is ultra-profitable, as its 85% operating margin shows.

QCOM holds 15% of the patents for 5G—the most of any company in the world. Which means it will charge many device makers a fee of 3%–5% on the price of each 5G device sold.

QCOM is best known, though, for selling computer chips. This segment has a much lower operating margin of 17%. But it generates 74% of QCOM’s sales.

This will be its most important segment going forward.

You see, QCOM is the world’s largest “System on Chip” (SoC) maker with a 42% market share. Its closest rival, Apple (APPL), has only 22% of the market.

A SoC is a microchip that has all the components required to power a phone.

Central processing units (CPUs) sold by the likes of Intel (INTC) and AMD (AMD) can’t run a computer or phone on their own. Qualcomm’s SoC, on the other hand, integrates all the components needed to run a device onto single chip.

It’s been a tough four years for this segment. Sales have slipped 15% since peaking in 2014.

That’s because Apple and Samsung stopped using QCOM’s chips in many of their phones.

During that time, 80% of 4G devices were powered by QCOM chips. In fact, it was the only company making 4G modems and antennas for years. So phone manufacturers like Apple and Samsung had to use them.

I think we’re going to see history repeat itself. Today, Qualcomm is the only company making 5G modems and antennas in America.

As I mentioned, current phone antennas can’t connect to 5G’s high frequency signal. Which means all new devices will have to be fitted with new antennas.

Twenty wireless providers are already planning to use QCOM’s chips and antennas in their 5G trials, including AT&T, Verizon, and Sprint.

And device makers like Sony, LG, and HTC plan to use them in their 5G products.

The first 5G networks and devices will launch next year. With QCOM being the only company to develop 5G chips and antennas, tens billions of dollars are set to flow its way.

I’m buying QCOM here and I expect it to at least double as 5G rolls out across America in the next 3–5 years.

Keep in mind its stock has jumped 48% since April… so it easily take a breather here before it marches higher.

As I mentioned, its nearly instantaneous speeds will usher in world-changing tech like self-driving cars and remote surgery.

5G is truly going to be one of the most disruptive trends we’ve seen since the late 1990s.

My colleague Chris Wood, Chief Investment Officer of RiskHedge, is talking with CEOs in this promising space. More on that soon…

That’s all for today. As always, thanks for being a RiskHedge reader. I’m happy to say our community of disruptive investors is growing fast.

If you know anyone interested in learning about disruption and how to profit from it—please forward them a copy of the RiskHedge Report.

And you can reach me at stephen@riskhedge.com.

In response to my article about “Autopilot stocks” and Google, RiskHedge reader Carl writes:

Stephen, my biggest gaffe was when Amazon was selling at $600 per share. I decided it was too expensive and would wait until I could buy at $500.  Whoops. I'm still waiting. It's trading at $2,000/share today. Google is a screaming buy now. For just the reasons you named, it may never dip below $1,000.

Carl, you make a good point. It’s often a mistake to wait for a pullback in disruptive stocks that are changing the world. Sometimes the train pulls out of the station and never slows down. But keep in mind, for the world's fourth-largest company, Google stock is quite volatile. This year alone it has corrected 15%, 13%, and 9%. A dip of this size would take GOOG back down to where it was trading in May. That's where I'll be buying.