I’d like you to meet the most disruptive force on earth.

With one pen stroke it can ruin a business, crash a stock, and wipe out shareholders.

Last April it shocked the world when it banned Chinese phone maker ZTE (ZTCOY) from doing business in America.

ZTE stock plunged 55% in two weeks and never recovered, as you can see here: 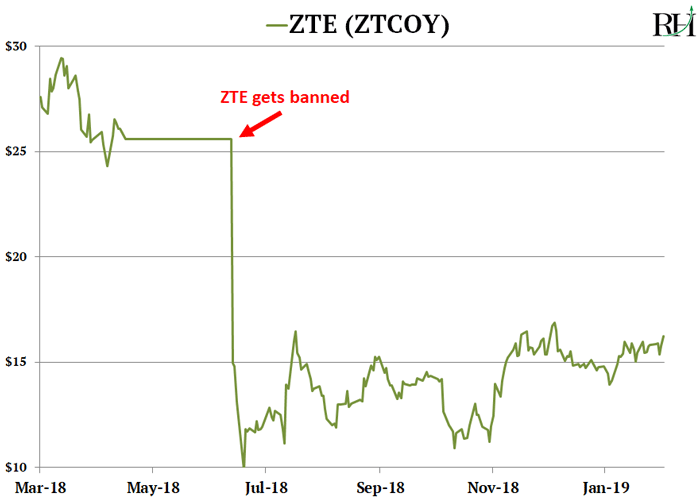 Any day now, this force is set to shake the stock market again…

And this time two “forgotten” stocks stand to hand investors big gains in the fallout.

In 2017 American officials discovered that ZTE was selling phones to US enemies like North Korea.

The US government told ZTE to stop. It refused… so lawmakers banned ZTE from doing any business in America.

ZTE had been manufacturing roughly 25% of its phone parts in the US. So the ban crippled its business overnight and sent shares plunging to a 55% wipeout in two weeks.

As you may have heard, Chinese phone maker Huawei stands accused of putting secret “backdoors” into its phones.

If true, these backdoors allow Huawei to spy on Americans who use Huawei phones.

Although Huawei is officially a private company, it is widely known to be an arm of the Chinese Communist government.

The US and China have been squabbling over this for a while. But the situation has reached its boiling point.

Within the next couple of days, President Trump is widely expected to sign an executive order outlawing Huawei products in America.

Keep in mind, Huawei isn’t some rinky-dink company. It sells more phones than Apple (AAPL) and generates as much revenue as Microsoft (MSFT).

If you’ve been reading RiskHedge, you know why this is crucial.

5G is the new lightning-fast cell network our phones will soon run on. And the “Great Upgrade” to 5G is one of the largest infrastructure projects in history.

Giant corporations like AT&T (T), Verizon (V), and T-Mobile (TMUS) must spend hundreds of billions of dollars to upgrade their networks to 5G.

Until recently, Huawei was first in line to receive much of this windfall.

It had secured $100 billion worth of 5G contracts—over five-times more than any of its rivals.

UK based Vodafone cancelled its 5G contract with Huawei this year.

The governments of Japan, Australia, and New Zealand have stepped in to ban their cell companies from working with Huawei on 5G.

Of course, all the 5G infrastructure still needs to be built…

Not all that long ago they dominated the cell phone market.

According to leading research firm Gartner, Nokia alone controlled 50% of the phone market in 2007.

Today it controls less than 1%.

And Ericsson shut down its phone business years ago.

They both totally missed the smartphone revolution. Their stocks have gone nowhere over the past decade, as you can see here: 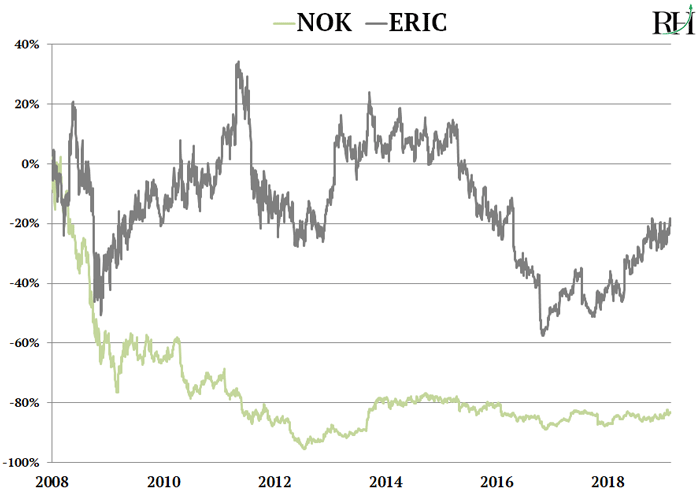 According to IHS Markit, Nokia and Ericsson control 50% of the 5G infrastructure market.

And here’s the key: There are only four major makers of 5G equipment and infrastructure in the world:

As I mentioned, Huawei and ZTE are essentially banned from the Western world.

Which means phone companies have little choice: They must work with Ericsson and Nokia to get 5G up and running.

And 3rd place T-Mobile has agreed to pay Nokia and Ericsson $3.5 billion each to build its 5G networks.

In short, Nokia and Ericsson have been handed the giant 5G infrastructure market on a silver platter.

When Nokia reported earnings two weeks ago, its network equipment sales shot above $6 billion for the first time in five years.

The market is beginning to recognize both companies will be big winners from the 5G buildout.

After a decade of being stuck in the mud, Ericsson’s stock has surged 50% in the past year. Nokia stock has climbed 20%.

As the 5G rollout kicks into high gear, both stocks are low-risk, money making opportunities.

For example, Nokia sold around $20 billion worth of network equipment last year. My research shows this should jump above $50 billion in the next two years as 5G ramps up.

So no matter what happens with the stock market, a tidal wave of money is about to flow into Nokia and Ericsson.

That’s all for this week. Are you planning to buy a 5G smartphone when the first one comes out later this year? Tell me at stephen@riskhedge.com.

RiskHedge reader Ken has a question about buying disruptive companies.

I love your RiskHedge Report and have bought several of your recommendations.

I’m a "senior citizen" in my 60s. While I certainly see the benefits of investing in disruptive companies, I'm wondering if they are appropriate for someone my age?

Ken, thank you for your question.

First off, you should limit your investment in any one stock to a maximum of 5% of your portfolio. This ensures your portfolio won’t take too big a loss if something goes wrong with one stock.

Having said that, truly disruptive companies perform well in all types of markets.

And if their stocks do slip in a market sell-off, they often bounce back strong.

Take the collapse in US stocks late last year, for example. Many disruptors we’ve talked about in this letter like data-refiner Alteryx (AYX), cyber company (OKTA), and online ad disruptor The Trade Desk (TTD) initially fell a bit along with the rest of the market.

But all three have shot right back up to hit all-time highs, even though the S&P 500 remains down 6%.