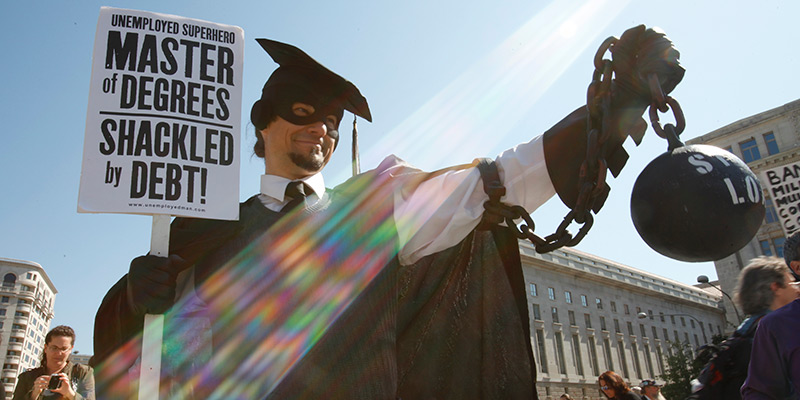 Here’s how the disruption of college will play out

Editor’s note: All week, we’ve been sharing our best essays of the year. For today’s special installment, we hand it off to Stephen… who explains why this is the end of traditional college as we know it (and why that’s a great thing)…

Here’s how the disruption of college will play out

One of America’s most broken industries is finally being exposed as a sham.

And make no mistake... the end of college as we know it is a great thing.

It’s great for families... who’ll save money and take on less debt putting kids through school.

It’s great for kids... who’ll no longer be lured into the socialist indoctrination centers that many American campuses have become.

And as I’ll show you, it’s great for investors... who stand to make a killing on the companies that’ll disrupt college for good.

I love learning, but I hate what college has become.

College costs have ballooned beyond all reason. They’ve risen even faster than healthcare costs... which is really saying something.

Kids are burying themselves in debt—$1.6 trillion at last count—in order to attend college.

Longtime RiskHedge readers know that college is broken. But the last time I wrote you about this, I had little hope things would change anytime soon.

Why? It’s a tough sell to convince an 18-year-old kid not to attend the four-year party all his friends are going to... especially when the US government is financing it through student loans.

Mark my words… coronavirus will be remembered for transforming college forever.

The virus has forced practically every college to move their courses online for the next semester.

So instead of living on campus and walking to lectures… kids will be sitting in their bedrooms watching professors on Zoom calls.

College is about much more than just the learning. There’s the education… and then you have the experience.

The learning part has barely changed in a century. Kids still sit in 60-year-old lecture halls listening to professors.

But now, the “experience” has been stripped away. Do you think teenagers will be willing to mortgage their futures in order to watch college lecture videos on the internet?

Right now, millions of kids are questioning what they’re paying tens of thousands of dollars for.

NOBODY is willing to pay $30,000/year to watch lecturers on Zoom calls. In fact, tuitions are already falling.

New data shows colleges that have reopened “online only” this fall have slashed costs by $9,000, on average.

How many kids will jump at the chance to save themselves tens of thousands of dollars in tuition with online learning?

In fact, by slashing tuitions for online courses, schools have permanently changed the perception of what college is worth.

Millions of American kids will soon be able to complete degrees­—fully online—for way less than the cost of traditional college.

But they won’t just be enrolling in Ohio State or University of Florida’s “online classes.”

With learning shifting onto the internet, there’s nothing stopping nimble disruptors from offering real college degrees at much cheaper prices.

Earlier this year, I highlighted a disruptor called 2U (TWOU). In short, 2U runs online classes for 73 of the world’s best colleges including Yale… Cambridge… Georgetown... and NYU.

For example, they could hire world-class professors to create online courses for, say, $200,000/year. Each professor might teach 250 students per school year, which works out to roughly $800 per student.

Tack on the cost of running the online course… plus a profit for the college… and you could probably charge each student $3,000/year.

These courses would carry the same qualification as any regular college. Yet, tuitions could be slashed by 70–80%.

Right now, every US state has a couple of big schools and dozens of little ones. And they’re essentially all teaching the same material in a slightly different way.

I expect online disruptors will put many of the 4,000 “middle-of-the-road” US colleges out of business.

Top schools like Harvard… Yale… and Stanford will always attract elite kids and command huge tuitions. They are disruption proof.

But the thousands of schools that sell “standard issue” degrees for tens of thousands of dollars are in for a rude awakening.

Think of them as the new department stores.

You know how unspecialized, middle of the road retailers like Macy’s and Sears are dying off?

Nimble online schools will do to traditional colleges what Amazon did to department stores.

This is a change every American kid should be cheering for.

Jeff Bezos recently dumped $3 billion worth of Amazon stock. It’s the third time this year he’s “offloaded” a massive chunk of his own company

All in all, he’s sold $10 BILLION worth of Amazon shares over the past year. Now, Bezos didn’t explain why he sold so many shares, but we don’t need to speculate…

Here at RiskHedge, we know Bezos is in big trouble. Read why in our research briefing you can’t find anywhere else.