This industry is BEGGING to be disrupted

Your brain is still developing.

But you’ve got a big decision to make, RIGHT NOW.

Either you have to get a job...

You can party for the next four years.

Do you want to have the time of your life... get drunk on weekdays... AND learn things that will make you boatloads of money for the rest of your life?

Of course you do!

**FINE PRINT: Actually… you’ll have to borrow an obscene amount of money and start paying it back—with interest—when you’re 22. But you're a kid, so 22 seems like decades away. Plus, you'll be making SO much money with your college degree, it won't matter. Seriously, take the money and party for four years.

Because college used to cost a reasonable amount of money.

Unless a kid has rich parents or a full ride scholarship, he must borrow a ton of money to pay for the privilege of attending college.

A few weeks ago, I wrote about how America’s broken healthcare industry was bankrupting families. From the letters you wrote me back, you’re clearly sick and tired of health insurance costs going up...and up... and up.

Well, the cost of college has jumped WAY more than the cost healthcare.

The cost of a four-year degree has shot up 15X in the past 40 years, as you can see here: 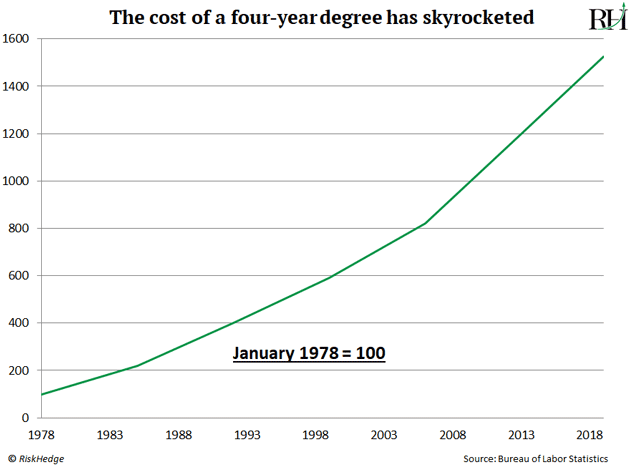 If car prices jumped as much as tuition, a base model Toyota Corolla would cost $90,000 today.

As costs have zoomed higher, kids are burying themselves under bigger and bigger piles of debt.

Student loan balances have snowballed over 400% in the past 15 years. Last month, they hit $1.5 trillion: 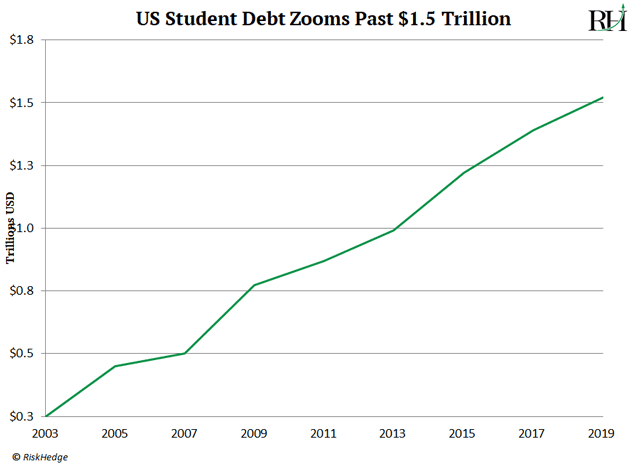 If student debt were a stock, every Wall Street analyst would be screaming “bubble.”

And get this… Americans now owe more for student debt than they owe for credit cards and auto loans... combined!

That’s a deep hole to dig out of before you’re legally allowed to drink beer.

And student loans are the only type of debt you can’t escape, no matter what.

Declaring bankruptcy can wipe away your mortgage, your credit card debt, and even stop IRS wage garnishments. But it won’t take a penny off your student loans.

Turn 65 and haven’t paid off your student loans? They’ll raid your Social Security check each month.

The government’s dirty fingerprints are all over both.

As you may know, the Federal government practically owns the student loan market.

If you’ve applied for a mortgage lately, you know it’s a painful process. You fill out stacks of paperwork… pay steep fees… and hand over a full accounting of your family’s finances.

But thanks to Uncle Sam, trillions of dollars in student loans get handed out to 17-year-old kids like candy on Halloween.

This free money has warped the whole system and pushed college costs far beyond all reason.

Think about it this way… when banks were handing out no-money-down mortgages in the early 2000s to anyone with a pulse, what happened to house prices?

But unfortunately, college has been America’s most “undisruptible” industry.

Once hailed as potential disruptors, for-profit colleges haven’t made a dent.

You’ve probably seen commercials for The University of Phoenix. It grew rapidly into one of the biggest and most famous for-profit colleges in the US. But enrollment has plunged lately. And the stock of its parent company, Apollo Education Group (APOL), crashed 80%

Other for-profit educators like Corinthian Colleges and Indiana’s ITT Tech went bankrupt a few years back and their stocks were “de-listed.”

Despite the crazy cost, college is still worth it for many folks today. If you want to be a professional, like an architect, a lawyer, or a CPA, you pretty much have to go to college.

On the other hand, if you plan to study archaeology or interpretive dance, college is almost definitely not worth it.

Have you heard of Coursera?

It’s a website where students can enroll in courses from many of the world’s top colleges—like Stanford, Yale, and Princeton.

Want to learn how financial markets work from an Ivy League school like Yale? You can enroll for just 50 bucks/month.

In the past few years, over 40 million Americans took an online course. I’ve taken classes on public speaking from online learning platform Udemy. They cost ten bucks each and were excellent.

The world’s fourth-largest company Google (GOOG) now offers professional certificates on Coursera. You can get a “cloud computing” certificate in two months. Google has given financial aid to 10,000 students taking the course.

It’s only a matter of time before Coursera and other online disruptors start offering real college degree courses.

What happens when you can get a bona fide online college degree—one that confers the exact same benefits of an in-person college degree—for a couple of thousand dollars?

The number of kids going to traditional college will crater. And schools will be forced to slash their tuition costs.

Many top American colleges are already making this shift. You can get a degree from Ivy League school University of Pennsylvania over the internet now.

The best part? Online tuition costs roughly half what you’d pay versus sitting in a lecture hall... even though the course material is identical.

Look, we’re barely in the first inning of disrupting education. Who knows, maybe in a few years the likes of Google and Amazon will open up their own colleges. You’ll get trained by Google for free. And when you finish, Google will charge companies to recruit you.

Early signs are mounting that some traditional colleges are in trouble.

After rising every decade since 1890… the number of US colleges has fallen over the past 10 years.

And the number of kids going to college has declined for seven consecutive years.

But online disruptors could put many of the 4,000 “middle-of-the-road” US colleges out of business.

Did you go to college? Was it worth it? Do you want your kid going to college? Tell me at Stephen@RiskHedge.com.

I recently joined Disruption investor and just finished reading all four reports that came with it. Do I understand that the monthly letter will contain new stock recommendations? I assume you will also offer updates on these stocks as things change? Thanks very much, I am very excited to be involved in Disruption Investor.

Hi Chris, thanks for writing in. Yes–each monthly issue of Disruption Investor has a new disruptive recommendation. And we review the whole portfolio every month. Great to have you on board!

Stephen, I have subscribed to DI. I read an article on Facebook about how they have the trust of their base. My question is who will replace Facebook? What does your research team see as a good alternative to advertising on Facebook?

Karl, welcome aboard. As you may know, Google and Facebook practically control the online ad market. For every $100 that’s spent on digital ads, Facebook and Google take roughly $60. Look to online shopping giant Amazon to challenge this duopoly. Its ad business is growing 40% a year. And I’ve mentioned in the past, The Trade Desk is a good way to make money from the digital ad trend.