Did you send Joe Biden some Bitcoin?

** Did you send Joe Biden some Bitcoin?
** Introducing the Monday RiskHedge Report
** Three computing breakthroughs you need to know

It started at around four in the afternoon. 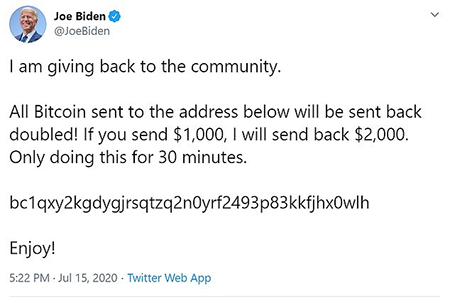 Hopefully, you didn’t take the bait.

Because it was all a big scam.

At first, everyone assumed this was the work of professional hackers. Turns out, the “mastermind” behind this attack was a 17-year-old kid from Florida!

With the help of his buddies, he broke into high-profile accounts like it was child’s play. Slicing right through Twitter’s cyber defenses like they didn’t exist.

He pocketed more than $100K… in just around three hours.

The kid was later caught and arrested.

But if a 17-year-old can hijack the world’s elite like it was nothing… how safe are you?

This is one of the biggest cyber meltdowns in years, and I’m not surprised by how it happened. The hacker allegedly pretended to work for Twitter’s IT department.

Remember, all of Twitter’s employees are working remotely right now. And this “work from home” movement is a dream come true for cyber criminals.

Imagine… your bank accounts, search history, medical records, and everything else that can be accessed online these days… out there for the entire world to see.

Unfortunately the chances of that happening are greater today than ever before.

That’s why I believe cybercrime might just be the #1 most important trend of the next couple years.

As executive editor at RiskHedge, it’s my job to make sure you hear about our best investment ideas in a timely manner.

You’ll get an email from me every Monday afternoon… so you can kick off each week on a profitable path.

If you’ve been reading RiskHedge, you know Stephen McBride is on record saying we’ll see the largest cyberattack in history before Halloween.

Unfortunately, he may be right…

Last month, thousands of Garmin watches and fitness trackers suddenly stopped working. If you have one, maybe you saw the message: “Down for maintenance. Check back shortly.”

But this wasn’t your typical maintenance tune-up. This was a massive, sophisticated ransom attack.

And here’s the craziest part…

In other words... hackers had a big tech company over a barrel... and the hackers won!

We’re going to see A LOT more of this in the coming months.

To get in front of this trend, consider buying cybersecurity stocks. Since Stephen alerted RiskHedge readers to this in April, they’ve jumped 38%. In fact, the largest cybersecurity ETF (HACK) just broke out to new all-time highs, as you see can below:

The End of the Most Powerful Force in Tech

Have you heard of Moore’s Law? It touches everything from 5G to self-driving cars to artificial intelligence.

I won’t get too technical here. But in the simplest sense, Moore’s Law observes that the number of transistors that can fit on a computer chip doubles about every two years. The more transistors on a chip, the more power it has.

This simple fact has led to exponential growth in computing power... which has driven almost all important technological achievements for the last half century. It’s why your iPhone is 4.3 million times more powerful than the computer that guided Neil Armstrong to the moon.

But Moore’s Law is now dead in the water.

You see, even though transistors are microscopic, they still take up physical space. And we’ve finally reached the point where they can’t get any smaller!

Some of the smartest people on the planet have been predicting “RIP Moore’s Law” for years.

The progress predicted by Moore’s law is coasting to a stop as we speak.

Does that mean progress will stop? Not a chance.

New technologies will pick up where Moore’s law leaves off. There are three exciting computing technologies in development you should know about.

According to Chris, the company that “saves” Moore’s Law will have to completely change how microchips are made. More on that soon...

P.S. Before I go, I want to make sure you saw Justin Spittler’s take on the big opportunity in solar stocks.

He messaged me yesterday: “Get ready… these stocks are about to go parabolic!”

This chart says it all: 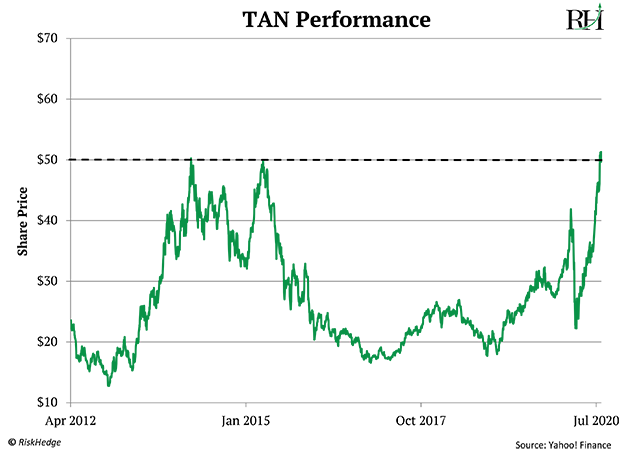 As you can see, Invesco Solar ETF (TAN), the bellwether for the entire industry, recently cleared a key support zone at around $50. Justin says this means it’s “off to the races.”

If you want to ride it higher, consider buying some shares of TAN now.

That’s all for this week. Let me know the trends you want to hear more about at chrisreilly@riskhedge.com.