His Porsche is now parked in the garage.

And family pictures hang in the living room.

But Lester and his wife have never set foot inside their new country club home!

They live in California… and didn’t want to visit Florida during the lockdowns.

So instead they toured the five-bedroom mansion virtually… bought it… and then shipped the car and furniture soon after.

“I never thought I’d buy something like this, sight unseen” Knispel told the Wall Street Journal.

What if you could buy or sell your home on a smartphone app?

Opendoor is an internet “realtor” that will buy your house sight unseen. No open houses, negotiation, or waiting months for a buyer to come up with the money.

Type your address into Opendoor’s website, submit a few photos, and it will make you a cash offer in a couple of days.

The idea of buying or selling a house online is “weird.” Sell your house to an internet realtor? Are you out of your mind?

But thousands of Americans love Opendoor. It bought and sold 20,000 homes online last year alone. And internet realtors are making real inroads in big US cities.

Last year, these disruptors snapped up more than 5% of houses in Atlanta, Phoenix, and Las Vegas.

Real estate is one of America’s biggest, most lucrative markets.

Roughly five million homes were sold last year, totaling $1.6 trillion in value. But did you know less than 1% of transactions happen online?

Today, you can do just about anything on your smartphone. But as I wrote last year, middlemen still dominate the real estate market.

If you’ve ever bought or sold a house, you know realtors take a fat slice for themselves. If the same agent is working for both sides on a $500,000 deal, you have to cut them a $30,000 check!

Then you have mortgage brokers… title insurers… surveyors… and lawyers to pay too! And getting slammed with fees is the “easy” part.

You have to negotiate offers and tend to repairs… host open houses with strangers traipsing through your home. And if things don’t go smoothly, prepare for shouting matches with incompetent realtors.

Selling a home is the largest transaction in most folks’ lives. It’s also the most painful, making it ripe for disruption.

An Opendoor survey found one in four Americans would rather get a root canal than go through the process of selling their home!

How much do you think that service would be worth?

This is what Opendoor has invented with iBuying. And it’s one of the greatest disruptions I’ve ever seen. And I’m convinced it will transform the $1.6 trillion/year real estate market.

As I mentioned, the disruptor basically allows you to buy and sell a house with a few clicks of your smartphone.

It handles all the renovations. It lets you pick a closing date. So you don’t have to shack up in your mother-in-law’s house for a month while you wait on your new home.

And Opendoor will wire the cash into your bank account in as little as three days. Compare that to the traditional route, which averages two months from listing to closing.

Take Miriam Glover, for example. The writer recently sold her Dallas-Fort Worth home to Opendoor.

Getting her house ready to sell and dealing with strangers walking through her property gave her pause. And she didn’t want the hassle of getting it in “list ready” condition.

So she contacted Opendoor. They asked her to send along photos and videos of the house. She sold her home just three hours after the assessment was completed!

It’s no surprise a homeowner requests an Opendoor offer every 60 seconds.

Americans bought and sold five million homes last year. Yet iBuyers like Opendoor accounted for less than 1% of deals.

Opendoor’s process is clearly better than the traditional route. I first wrote about the disruptor of real estate last year, and judging by the replies I got, readers are already fed up with realtors…

RiskHedge reader Tim told me: “The last five property deals have been realtor-less on my side. I offered to have them help me for a small cut and they refused. So they are cutting their own throats.”

And Terry said: “You ask if I would ever use a real estate agent to sell my home and my answer is NO! We sold three houses and not one was sold with the help of a realtor.”

I’m convinced millions of Americans will soon ditch the old home-selling process. Opendoor will do to real estate what Uber did to taxis.

My research suggests iBuying could grab at least 20% of US housing over the coming decade. That’s a 40X surge from today’s levels. So iBuyers have years of rapid growth ahead.

Even traditional real estate firms are latching onto this disruption.

Realtor.com recently signed a partnership with Opendoor. When homeowners visit its new "seller marketplace," they can request an offer from Opendoor instead of listing on the open market.

But Opendoor (IPOB) recently went public through a “reverse merger.” The disruptor is valued at just $4.8 billion today. This will be one of those stocks we look back at in 10 years and think: “I can’t believe I missed buying Opendoor at those prices.” 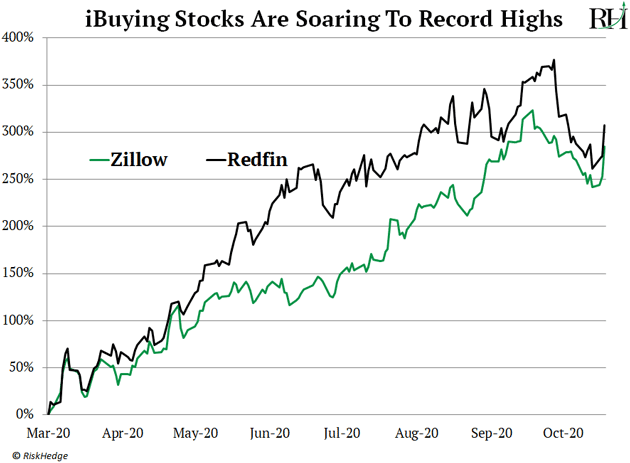 In short, we’ve only scratched the surface of this disruption. These iBuying stocks will transform how we buy and sell homes over the next decade.

My analysis suggests all three will head much higher in the coming years.

Have you dealt with iBuyers or traditional realtors recently? I want to hear your stories at Stephen@riskhedge.com.

What a week for the mailbag! RiskHedge readers have been writing in to share what’s going on in their local markets… Read on to see what they’re reporting, and make sure to join the conversation at Stephen@riskhedge.com.

And if you missed last week’s essay on why real estate is booming, you can catch up here.

I've been in the real estate game since '94. Owned apartments in SoCal.... built a 13 office franchise in Costa Rica... and now enjoying my business here in Delray Beach, FL. The market here is on fire for both micro and macro reasons.

Between millennials, cheap money/low mortgage rates, housing shortage... Those who think this real estate market is short-lived will be in for a surprise as it sustains its strength for the next few years. Look forward to more from you and your inner circle moving forward. Cheers. –John

This is just a sugar rush after lockdown was lifted. Sales are slowing and this bubble will end like all other bubbles. Not well. –Barry

I live in Miami Shores, a small village just a few miles from Miami Beach and downtown, and homes are being sold in days to all the New Yorkers that are moving down here after having to quarantine in small apartments in Manhattan. It’s crazy!  –Carolina

East coast of North Carolina. Market is red hot. Some condos list for hours and have multiple offers. Lots of property selling over ask. –Donald

Good stuff! My neighbors (who bought their house less than 18 months ago) just sold theirs for 15% higher than they paid for it and got an offer less than a week after listing. Also, if you believe Zillow, the value of our home has appreciated ~10% in 15 months. Not bad at all!

I live out here in Colorado so the housing market has been good for sellers. On the ballot here is a state initiative put forth to voters that would repeal a piece of legislation from the early 80s (the Gallagher Amendment) that controls the rate at which property taxes can increase. If it's rejected again, I look forward to what it can do to home values! –Dan

In Canada, we didn’t go through the same housing crash that US did back in 2008. Our housing market has been booming since almost the early 2000s. And the Coronavirus hasn’t seemed to have slowed it down. I wonder if it’s truly a bubble here or like in the US the boom will continue. –Metin