5G is here, and it’s incredible…

Stephen’s Note: Today I’m stepping aside so RiskHedge CIO Chris Wood can give you an important update on what’s soon to be the hottest investment trend on earth: 5G.

Below you’ll discover where blisteringly fast 5G cell networks have already come online in America... when the first 5G Apple iPhone will come out... and Chris shares his top stocks to profit from the 5G “awakening.”

While an average guy named Ricky stood in the endzone.

Keyshawn’s challenge was to run 40 yards faster than Ricky could download an episode of HBO’s Hard Knocks to his smartphone.

Ricky won. He downloaded the hour-long show in 3.6 seconds.

We’ve been hearing about 5G for a long time. Many readers have asked me: What’s taking so long?

Progress may feel slow because 5G phones aren’t mainstream yet.

But 5G is actually coming online much faster than analysts predicted just two years ago. The next year or so will be a very, very exciting time to own the right 5G stocks.

In a minute, I’ll give you a few of my top 5G stock picks.

First, let me get you up to speed on all the exciting things happening in 5G.

Verizon has launched its new 5G network in 13 NFL stadiums.

The point is to make games more fun for fans.

At AT&T Stadium for example, fans can participate in augmented reality (AR) experiences that were impossible before 5G.

If you have a Samsung Galaxy S10 5G smartphone for example, point the camera towards Cowboy stadium as you walk in. You’ll see 36-foot tall digital versions of Dallas Cowboy players yelling chants to hype you up.

Once you’re in the stadium, you can do a touchdown dance, and digital Dallas Cowboys will dance with you.

Or you can pose for a picture with the digital Cowboys, like this: 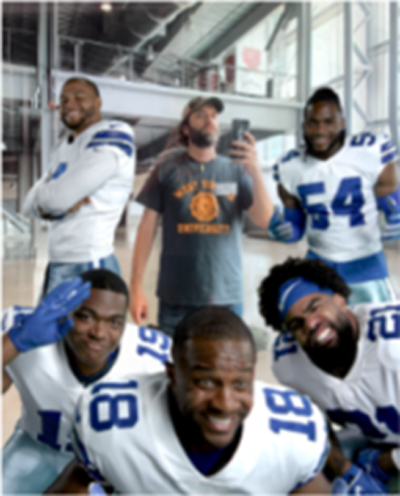 You can even dodge AR defensive robots on the field as you try to score a touchdown in a new mobile game.

None of it is possible without 5G.

Verizon launched its 5G network in parts of the city back in April.

It was the first commercial launch of 5G in the world.

A man named Danny Winget travelled around the city testing the network.

The download speeds he reported were incredible… 10 times faster than the fastest 4G connections.

When fully deployed, the networks should reach peak speeds of 100X faster than 4G.

It took me the same amount of time to download just the first episode... and I was logged into my home high-speed broadband internet connection!

Soon it will let you:

✔ Attend a meeting in New York as a hologram from the comfort of your home;

✔ Get around safely in a self-driving car—even if you drank a little too much wine on date night;

✔ For you surgeons reading this, you’ll be able to operate on patients hundreds of miles away over a wireless network using robots.

In fact, the early stages of the 5G “awakening” are happening right now.

The average guy doesn’t know it yet, because you don’t see 5G phones on the street yet.

But look at all the quiet progress that’s been made in the last few months...

All of the big four wireless carriers in the US—Verizon, AT&T, T-Mobile, and Sprint—have launched 5G in certain parts of the country.

Verizon has rolled out 5G to parts of 11 US cities. T-Mobile’s in six cities, Sprint’s in nine, and AT&T is in parts of 21 cities.

Many more rollouts are planned for next year.

Meanwhile, the first 5G phones have hit the US market.

The acquisition means Apple is well on its way to producing its own 5G smartphone modems.

Industry insiders expect the company to launch its first 5G iPhone next year.

5G is coming online outside the US, too.

Deutsche Telecom and Vodafone are deploying 5G in parts of Europe. And China’s state-owned carriers expect to have 5G up and running in 50 cities by the end of this year.

Well, it means faster phone speeds and a lot of exciting new technologies that will make your life easier.

But it also means much more than that…

It means this is an incredible time to invest.

There’s a mountain of cash up for grabs as 5G continues to rollout.

To make money in 5G, look into:

✔ Smartphone and tablet makers like Apple (AAPL) and Samsung (SSNLF)

Or, if you’re comfortable taking a bit more risk for potentially massive profits, look at smaller disruptive companies that are making 5G possible.

We’re going to need hundreds of billions more RF filters as 5G rolls out... and the small companies that have the best technology on the market stand to make a killing.

Talk to you soon,