Why the naysayers are wrong about America

You’re about to “listen in” on an important conversation I just had with my colleague Stephen McBride. Below, you’ll hear our unfiltered thoughts on the American economy… what it means for you as an investor… and much more.

And as a quick reminder… Stephen and I just teamed up to launch RiskHedge’s new breakthrough advisory: Disruption Trader. Already, hundreds of RiskHedge readers have joined and are enjoying fast profits on our explosive “hypergrowth” trades.

If you’re interested in joining us, we’ve made a special discount available for the next 2 days only. Just go here to learn more. Now, on to our conversation…

Stephen: Justin, have you seen the headlines lately?

The “naysayers” would have you believe the world is ending.

I get it... we all know fear sells... but do these people even bother to look at what’s really going on in America?

Justin: I learned long ago to tune out messages like these. One of the most dangerous things an investor can do is to take the stuff you hear on CNBC or CNN seriously. It’s all just noise designed to scare you and keep your eyes glued to the TV.

Stephen: I couldn’t agree more. Their #1 goal is to irritate their audience into a constant state of mild panic. They trumpet bad news and downplay good news to boost ratings.

Justin: That’s why I prefer to look at the world through stock charts. That might seem like an odd thing to do, but stock prices don’t lie. They don’t have an agenda or political bias. Instead, they show what investors are really doing with their money.

Justin: Right now, the behavior of advertising stocks tells us there’s an American boom going on...

And it’s up 114% this year, having recently broken out to fresh highs. 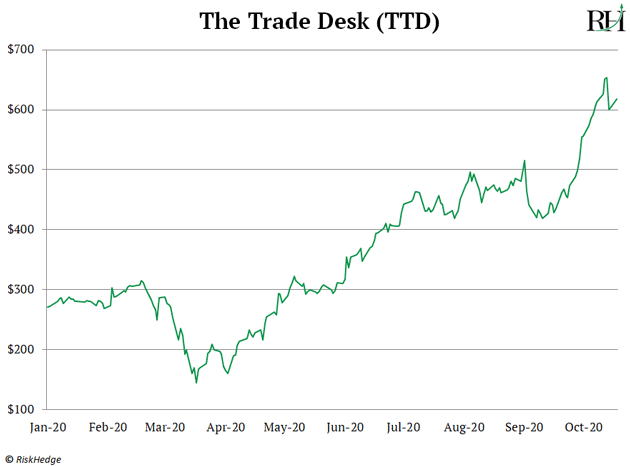 Not only does spending on advertising follow economic growth very closely, it’s also very “sensitive.” Ad spending is one of the first things a company will cut if it’s worried about the future. And companies only expand ad spending when they’re feeling good about their growth prospects. 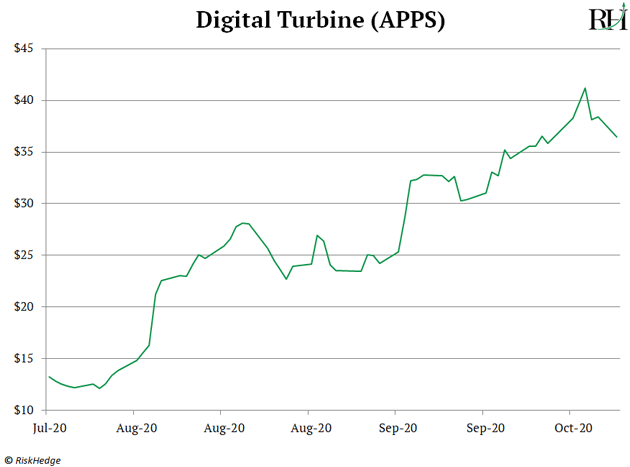 If the economy were really on life support, TTD and APPS would be plummeting, not soaring.

Google (GOOG) and Facebook (FB)—the two biggest advertisers on the planet—would be breaking down, not breaking out…

Roku (ROKU) shareholders wouldn’t be sitting on a triple since March (Roku is moving into streaming advertising).

And look... there’s no denying the COVID lockdowns sucker-punched American businesses. A lot of people are still struggling, and I feel for them.

But I don’t think Americans get nearly enough credit for how resilient they are...

Stephen: As a guy born and raised in Ireland, I couldn’t agree more. I love the entrepreneurial culture here. And the “boom” pattern you’re talking about is evident in “small business” stocks, too.

Look at mobile payments company Square (SQ). It makes those little white boxes that plug into your phone to swipe credit cards...

The tech has been a godsend for small businesses. It allows a one-man shop to easily take digital payments at the local farmers market or fruit stand.

The stock’s up something like 325% since March, and just hit an all-time high: 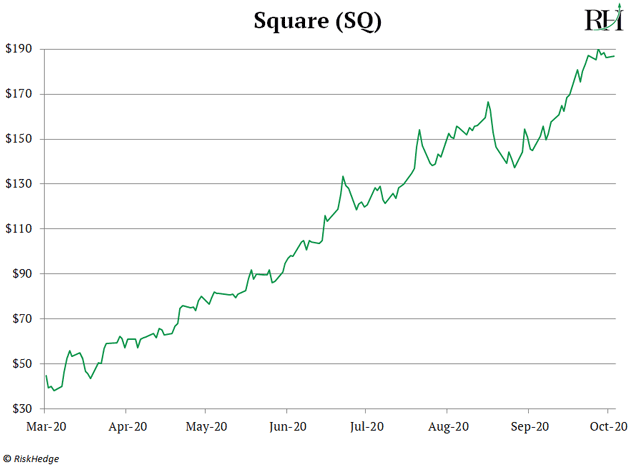 Justin: Same story with Shopify (SHOP). It helps mom and pop stores easily sell stuff online. Did you know businesses with a presence on Shopify recouped 94% of all sales lost due to COVID with online orders? Talk about resiliency!

Shopify stock has soared more than 200% since the lockdowns: 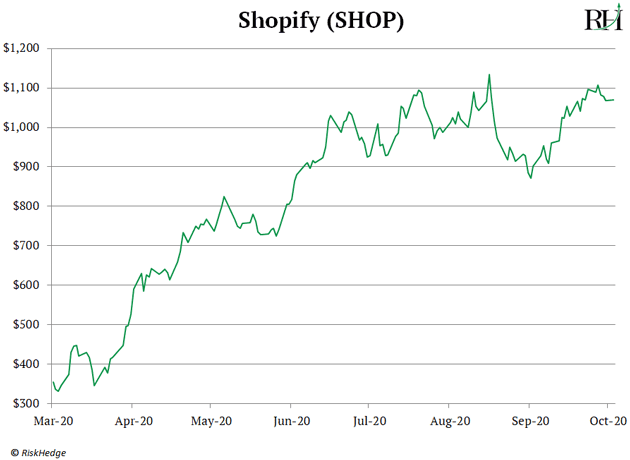 Stephen: And this is far from just a “tech stock” story. Home Depot (HD) and Lowe’s (LOW) are about as low-tech as it gets… and both of their stocks are roaring. They just broke out to all-time highs... up 66% and 142% since the March bottom in stocks.

This is a full-fledged American boom.

Justin: And that’s really the core of our Hypergrowth America thesis, right?

Not only are key American “bellwether” stocks rising, which tells us the economy is alive and well…

We’re seeing a whole new class of “hypergrowth” stocks growing like crazy, too.

As you know, what’s happening right now is truly unprecedented. Specific hypergrowth stocks are shooting up 200%, 300%, even 400% in a matter of months—sometimes weeks.

And the sad part is 99% of investors don’t hear about them. Again, that’s because the media would rather focus on the bad news and the “losers” of the stock market… instead of all the new industries reinventing themselves before our eyes.

Stephen: Couldn’t agree more. Plus, the media is hopelessly preoccupied with the government’s response to COVID.

How about some recognition for American businesses? To me they deserve 100% of the credit.

I mean, everything’s totally changed in the last six months. How we work... how we exercise... how we see the doctor.

Make no mistake: The American economy is transforming—and growing!—before our eyes. It’s an exciting time to be an investor. There’s so much opportunity in fast-growing stocks available today.

Justin: And that’s why we launched Disruption Trader.

As I’m sure readers realize, the big stock gains you just cited came fast... within months. If you hesitated you missed them. And we realized the “old way” of investing doesn’t cut it given how fast things are moving today.

Stephen: So you and I essentially “fused” our two different approaches to investing in Disruption Trader.

Then you “stalk” it… watching for precisely the right time to get in and out to maximize profits...

Justin: That last part is critical…

Because unlike most stocks, being off by even a day or two could cost you thousands or even tens of thousands of dollars.

As we’ve emphasized, hypergrowth stocks move so fast, you really need to nail your entries and exits.

If readers are interested in trading hypergrowth stocks on their own, I have 3 “golden rules”…

Stephen: Great advice. And for readers who’d rather let us guide them to big hypergrowth profits… a few Founding Memberships to Disruption Trader are still available… but they’re going fast.