Three safe ways to cash in on this crazy market

Are you going stir crazy?

If so, I don’t blame you. Being cooped up in your home for weeks can be draining.

I trade stocks for a living. I can do this anywhere. All I need is my laptop and a trusty internet connection.

Of course, I’m obviously not traveling these days. So, I’m spending more time doing what I love: analyzing stocks and sharing today’s top opportunities with you.

But I’m not just looking at any stocks…

This seems like common sense. But many investors are doing the exact opposite right now. They’re betting on troubled stocks in the hope that they’ll get in at the bottom.

This is incredibly difficult to do, even for professional investors. If your timing is off by even just one day, you can lose thousands of dollars.

So, unless you have a high tolerance for pain, I wouldn’t make those bets.

There’s a much simpler and safer way to pluck profits in this market.

Relative strength measures how one financial asset is holding up versus another asset.

You can measure a stock’s relative strength compared to an index… another stock… an ETF… or even a commodity like oil.

You want to own stocks that are displaying strength relative to the broad market. That’s what’s called “outperformance.”

Below, we’re going to look are three sectors that are not only outperforming the market today… but should crush most stocks for years to come.

It’s no secret that video games’ popularity has exploded in recent years. But they’re more popular than ever now, thanks to the coronavirus.

Verizon (VZ) is seeing the same thing. It recently reported a 75% spike in video game usage due to the coronavirus.

So, it’s no surprise that video game stocks have held up well lately.

Major video game makers Electronic Arts (EA) and Activision (ATVI) are both trading within 5% of their recent highs. Take-Two Interactive (TTWO) is less than 10% off its highs. The S&P 500, on the other hand, is still more than 20% below its 52-week high.

But it’s not just the “majors” that are displaying relative strength. The entire video game industry is outperforming.

See for yourself. This chart compares the performance of the ETFMG Video Game Tech ETF (GAMR)—a fund that invests in dozens of video game stocks—with the S&P 500.

When the line on this chart is rising, it means video game stocks are outperforming the broad market. When it’s falling, it means they’re underperforming. 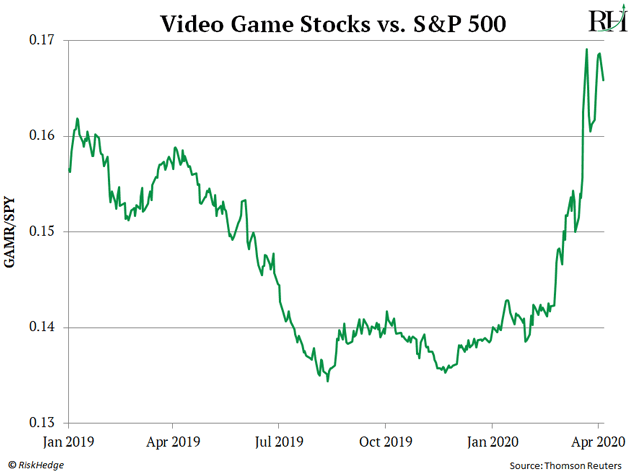 Video game stocks have been crushing all year! And that should continue for years to come.

Every five to eight years, a new generation of video game consoles comes out.

And Sony (SNE) and Microsoft (MSFT) both plan to release new game consoles just in time for the holiday season.

This isn’t just a big deal for “gamers.” It’s a mammoth opportunity for investors.

During the last cycle like this, Take-Two skyrocketed 1,665% in six years. Electronic Arts surged 1,261% over the same period. Activision rallied 690%.

And here’s the thing. This new video game super cycle should play out even if there’s a recession.

No wonder video game stocks are weathering the storm better than most stocks. But they’re not the only outperformers.

Cloud computing is one of the most game-changing technological breakthroughs of the last 15 years.

“The cloud” made it possible for everyday people and businesses to access the mega computing power of centralized servers through the internet—anytime and anywhere.

It’s why we’re able to play video games online with our friends, no matter where they are in the world. The cloud also makes it possible to chat with your doctor from home using Teladoc (TDOC)… or use Zoom Video (ZM) to speak with your co-workers. The same goes for online shopping and watching Netflix (NFLX).

That’s right. None of today’s “stay-at-home” disruptors would even exist without the cloud.

That’s a big reason why cloud computing stocks have been standouts lately. The chart below says it all.

It measures the performance of the First Trust Cloud Computing ETF (SKYY) versus the S&P 500. You can see that cloud computing stocks have been outperforming the S&P 500 for years… but they “broke out” against the broad market last week. 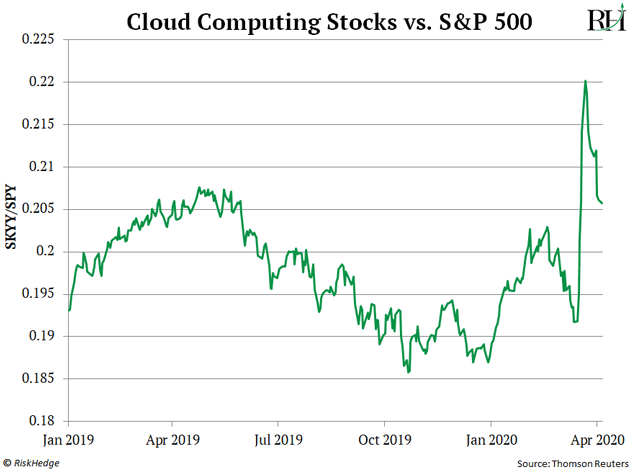 According to the renowned research firm Gartner, “nobody’s scaling back” on cloud computing despite the coronavirus. Gartner also projects that cloud services revenue will rise by 33% to over $350 billion by 2022.

And the investment firm Wedbush Securities projects that nearly $1 trillion will be spent on cloud computing over the next decade.

During the last financial crisis, Salesforce (CRM)—a leader in the cloud computing space—saw its sales jump 21% in 2009!

Of course, all this data being sent back and forth across the cloud must be protected.

These companies get paid to prevent and stop cyberattacks in their tracks.

This job is mission critical in today’s digital world… especially with millions of people working from home.

Savvy investors understand this. Just look at how the First Trust NASDAQ Cybersecurity ETF (CIBR) has performed versus the S&P 500. 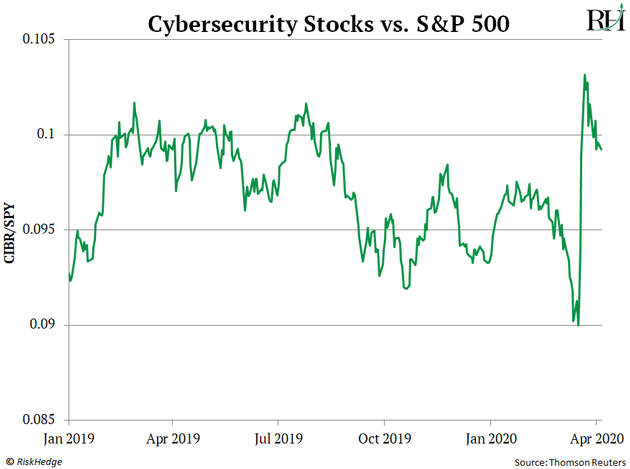 Since March, cybersecurity stocks have been outperforming the S&P 500 by a wide margin. They’re now on the verge of breaking out on a relative basis.

That would be a major sign of strength. And there’s a good chance that will happen, even if the broad market sells off again.

Like video games and cloud computing, cybersecurity is a resilient business. It’s needed during good and bad times. In fact, cybercrime spiked by 33% during the 2008–2009 recession.

This makes cybersecurity stocks a great bet during periods of economic uncertainty.

But remember what I said in Saturday’s RiskHedge Roundup: Bear markets don’t come with expiration dates.

In other words, they often end with little to no warning… catching most investors by complete surprise.

If you aren’t ready for this, you’ll likely miss out on the explosive rallies that follow bear markets.

This is why I suggest patiently building positions in today’s strongest sectors. These stocks will likely emerge from all this as high-flyers… and continue to outperform for years to come.

Are you buying stocks today or waiting for another leg down? Let me know at jspittler@riskhedge.com.

P.S. Chinese internet stocks are also displaying a lot of relative strength right now. In fact, the KraneShares CSI China Internet ETF (KWEB) has been strengthening against the S&P 500 since last August. Still, I suggest avoiding Chinese stocks at this time due to the recent scandal involving Luckin Coffee (LK), or what many people were calling the “Starbucks of China.” There are much safer places to invest your money.