This Tiny Company Has Its"Hooks” in Your Bank

The days of going to a bank are coming to an end.

And foot traffic to banks has fallen by 50%.

Bank branches are shutting down left and right for a simple reason...

These days, you can deposit a check by taking a photo with your phone. You can open a bank account or order a new credit card in five minutes over the internet. You can even take out a mortgage without ever seeing a human banker, thanks to disruptive services like Quicken Loans.

And it’s not just banks. Digital disruption is eating away at every “old” business model in finance. Everyone from stockbrokers to financial planners is under assault.

Money used to represent a claim on a “real” asset like gold, silver, or land.

Then money became paper. Paper money has no ties to anything “real”... but at least you can see it and touch it.

Now even paper cash is fading away. How often do you pay with cash? If you’re like most Americans, probably not very often.

The “business” of money is going the same way. Banks are closing their doors… stockbrokers are dying off... even hedge fund managers are losing their jobs to computers.

The digitization of everything money is an unstoppable, “carved-in-granite” trend. One that’s already minted a lot of millionaires... and is going to mint a whole lot more.

In this issue, I’ll tell you about a tiny company that makes the financial “plumbing” of the internet. It’s growing like crazy... you likely use its service without knowing it... and you’ve probably never heard of it.

For example, Intuit (INTU) has gained 849% since it went public: 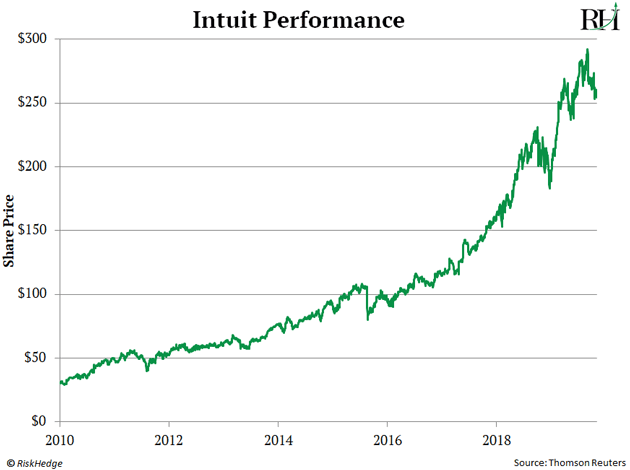 Intuit (INTU) owns Quicken Loans—America’s largest mortgage lender. It’s the fastest growing company in its industry… and it’s achieved all this without any physical branches! Everything is done online or over the phone. 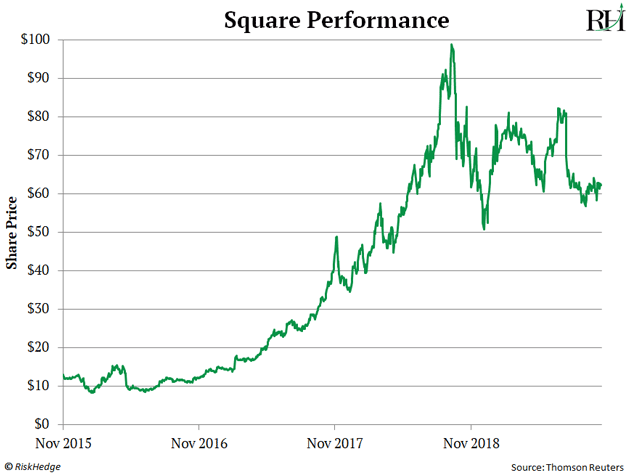 If you don’t know Square, it’s a godsend for small business owners. It makes the little white boxes that plug into your phone to swipe a credit card. Square also owns the popular CashApp, which lets you send money instantly—similar to PayPal or Venmo.

These are staggering returns. But they’re just a taste of what’s to come...

Today, 414 private companies are worth more than $1 billion.

And get this… 52 of them are fintech!

Venture capitalist (VC) investors have poured capital into fintech startups for a simple reason: huge profits are a stake.

The global financial services industry is one of the biggest on the planet. It’s poised to be worth nearly $27 trillion by 2020. That’s far more than the annual economic output of the United States!

No serious investor can afford to ignore the exciting things happening in fintech.

I’ve studied practically every private fintech company. Several are promising, but my research keeps leading me back to a company called Plaid.

Plaid is far from a household name. You won’t find it in the “app store.” Unlike more famous fintech “unicorn” Robinhood, you won’t see commercials for Plaid on TV.

…including giants like Bank of America, JP Morgan, and Wells Fargo.

Plaid serves as a bridge between banks and thousands of apps that involve transferring, spending, or investing money. In short, it built out the digital “plumbing” of fintech.

Plaid’s reach is incredible. According to the company, nearly one out four Americans use Plaid through one app or another.

For example, Plaid allows you to buy bitcoin from your checking account through the app Coinbase. It allows you to trade stocks on Robinhood. It powers popular apps like Venmo and CashApp.

Plaid’s business is booming. Its revenues quadrupled between 2016 and 2018. And it’s reportedly close to producing positive cash flow.

Importantly, Plaid is building a lasting business model... unlike many “hot” private companies that seek “growth at all costs.”

The titans of financial services are betting on Plaid too. Visa (V) and American Express (AXP) invested in Plaid recently. Goldman Sachs (GS) and Citi Group (C) have also backed the company through their venture arms.

The company hasn’t yet filed its “S-1,” which companies must file before they go public.

Because of its “boring” business, Plaid probably won’t get a ton of hype heading into its IPO.

It will slide under most investors’ radar. As regular RiskHedge readers know, these are exactly the type of overlooked IPOs that often dish out the biggest gains.

Take Stitch Fix (SFIX) – an online personal styling platform. Heading into its November 2017 IPO, Stitch Fix was valued at just $1.4 billion. There wasn’t much hype around it.

SFIX surged 246% in its first 11 months as a publicly traded company.

Carvana (CVNA)—an online platform for selling used cars—also had a monster IPO. Since going public at a modest $2 billion valuation in April 2017, CVNA has skyrocketed 703%!

Keep in mind, any individual investor could have bagged these returns. All you had to do was buy these stocks shortly after IPO.

I’ll update you as Plaid moves closer to IPO.