The whole truth about the vaccine…

Something unusual happened in the stock market last week.

These aren’t your typical market leaders. We’re talking about some of the worst-performing stocks of 2020.

Well, the casual observer will tell you these stocks skyrocketed solely because of Pfizer’s (PFE) positive vaccine news.

But that’s only half the truth.

Fact is, these moves wouldn’t have been nearly as explosive were it not for a powerful market force.

Even fewer know how to exploit it for huge profits.

And that’s a shame.

Investors who know how to capitalize off this can pocket 30%... 40%... even 50% gains in a day. That’s many times more than the typical investor earns in a year.

In a minute, I’ll share how you can collect those types of gains today. But first, let me explain what this strategy is all about…

Short selling a stock is betting that it will fall in value.

Most folks don’t realize that short sellers never actually own a stock they short. They borrow it from someone else and sell it into the market.

Therefore, to close out the trade, they must always buy the stock back. That’s where your opportunity comes in...

When a shorted stock spikes, short sellers often scramble en masse to buy it back.

This forced buying can put intense pressure on a stock to rise. If the buying pressure is strong enough, it ignites what’s known as a “short squeeze”... which can lead to 40%, 50%, or bigger gains in as little as a few hours.

That’s why the stocks I mentioned above didn’t just pop 10% on the Pfizer news. They went parabolic.

More than 40% of AMC Entertainment’s outstanding shares were short in November.

These are sky-high short interest levels. When I scan markets for short squeeze setups, I consider anything above 10% high.

But the traders shorting them were caught off guard by the vaccine news. And that led to a tidal wave of forced buying.

What would have been pops in price turned into monstrous rallies in a blink of an eye.

Unfortunately, many of these stocks will likely give back these gains. And that’s because these aren’t world-class businesses.

However, there’s a much more reliable way to profit off short squeezes:

That may surprise you. After all, the most disruptive and fastest-growing companies often come from the IPO market.

There’s some logic to this…

IPOs are, by definition, new stocks. They have no track record on the public markets. This attracts many doubters... and short sellers.

Most IPOs aren’t household names yet like Starbucks (SBUX), Walmart (WMT), and Facebook (FB). Many folks have never used their products or services. That keeps them from investing in these companies.

And that’s why many world-class IPOs struggle early on.

But often, the tide turns and the short sellers have no choice but to buy back shares.

Take Zoom Video (ZM). It’s no secret that the coronavirus lit a fire under Zoom’s share price as millions of folks were forced to work from home.

But Zoom was also a heavily shorted, recent IPO... and a massive short squeeze was responsible for kicking off its “parabolic” rally. Before Zoom really got moving, it had a short interest of more than 24%.

So, Zoom had its fair share of doubters. And when the stock started climbing, the short sellers had to buy Zoom’s stock to cover their shorts. This was like pouring gasoline onto a fire, as you can see below. 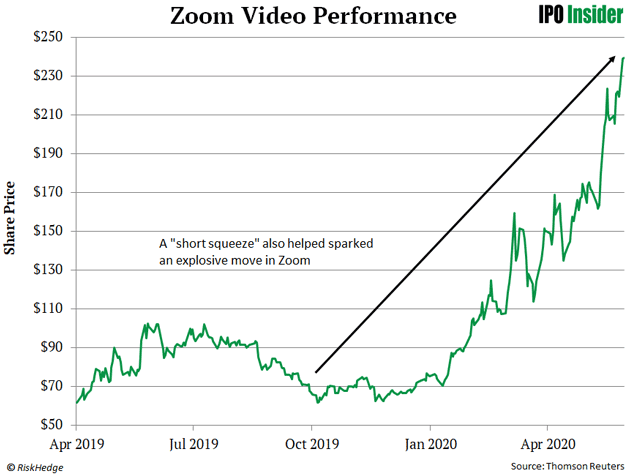 The stock spiked 20%+ in a little over a month… and never looked back. It went on to soar 286% in eight months!

This misunderstood IPO plummeted 50% in 11 months. Then, short sellers were forced to buy back the stock, and RNG pulled a complete “180.” 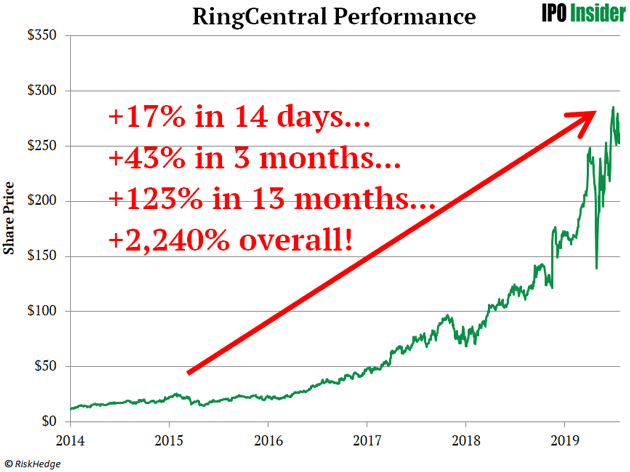 There’s a big difference between these short squeezes and the ones I mentioned earlier...

Keep in mind, if you’re solely after quick profits, you need not worry about the quality of the business. Simply find a stock with a short interest above 20%, then "stalk” it.

When it spikes above recent highs, that’s a tell that short sellers are likely panicking. A short squeeze is likely underway—and quick profits are likely on the table if you act quickly.

But if you’re after big rallies that last months—even years—you need to focus on IPOs in great businesses.

That’s exactly what I do in my IPO Insider advisory. And we’re sitting on gains of 70% in two months, 227% since April… and 239% in less than a year… but my research shows this is just the beginning.

And last Thursday, I shared a brand-new short squeeze opportunity with my subscribers. This company is a true innovator. It’s using artificial intelligence to dominate a $30 billion market. It’s also one of the most fundamentally strong IPOs you’ll find.

And yet, this stock is hated. Its short interest stands at nearly 20%. And a potential short squeeze could easily ignite a multi-year rally.

You can learn how to access the name of this IPO—and all the details behind my specific short squeeze trading method—by going here.