The next great trillion-dollar stock

I’m about to show you the most important table in all of investing.

Please look at it closely.

You probably recognize most of these stocks. The 2020 column reads like a “who’s who” of the most popular US stocks today.

In other words, most of the world’s dominant companies falter and fall out of the top 10. Only Microsoft has maintained its position since 2000.

And usually when a stock drops off the list, it does not decline gracefully. Investors who owned it get crushed.

And what they indicate might shock you: Owning the largest companies in the world is usually a money-losing strategy.

In other words, you generally don’t want to own the stocks “at the top of the mountain” today. Instead, hunt for the stocks that are climbing the mountain. The ones that will be on top in 5–10 years.

In my experience, most investors do the opposite. They gravitate toward companies that are already huge. They think huge = safe. They assume today’s powerful companies like Apple and Facebook will be powerful forever.

That’s not usually how it turns out. We see it play out over and over again in the stock market: Smaller, hungrier companies rise up and eat the lunch of larger, older companies.

Today, I’ll predict one new rising star that could someday claim a spot in the top 10.

From creating the website… to shipping orders… to processing payments… Shopify is a “one-stop shop” for anyone wanting to sell online.

Americans are spending more money online than ever before. In 2009, internet shopping was a $100 billion business. Last year consumers spent over $600 billion online.

The thing is… mom-and-pop shops only grab a tiny slice of the pie.

There are 30 million small businesses in the US. They make up 99.9% of all companies in America. And according to IRS data, firms with less than $100,000 in annual sales raked in a combined $2.2 trillion last year.

A recent CNBC poll found almost half of small businesses don’t even have a website.

And according to Gallup, 2/3 of mom-and-pop stores that sell online generate less than 10% of their sales on the internet.

It forced tens of millions of businesses to close their doors for months. And the only way to keep cash coming in was to sell online. Businesses that didn’t even have a rudimentary website were suddenly rushing to set up fully functional internet stores.

Web hosting company GoDaddy found 20% of small businesses sold an item online for the first time ever during lockdown.

Until recently, creating an online store during a pandemic would have been impossible. But as I showed you, Shopify came to the rescue for millions of mom-and-pop shops.

New stores created on Shopify’s platform surged 62% during the lockdowns. And the most shocking stat of all: Stores with a presence on Shopify recouped 94% of lost in-person sales with online orders!

Internet shopping has grown more in the past 12 weeks than it did during the last decade, as you can see here: 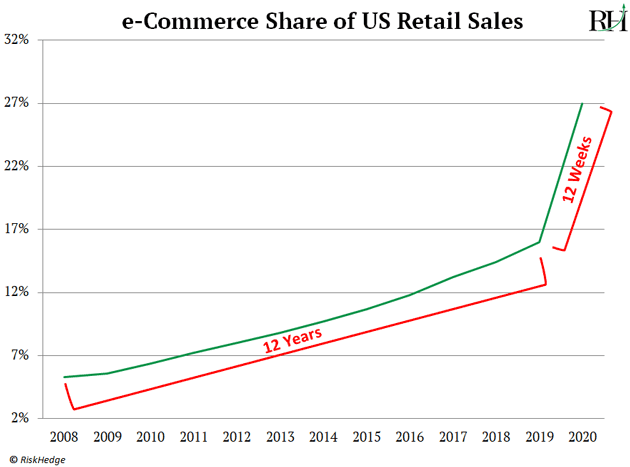 For as little as $29 a month, Shopify manages every part of their online stores, including deliveries.

To put it mildly, that’s a real bargain... considering Shopify was the only thing that saved many mom-and-pops from going belly up during lockdowns.

In fact, being online also helps them reach thousands of new customers. Internet shopping has no boundaries. With a Shopify website, the neighborhood craft store can now sell to folks across the country.

Remember, Shopify is like an invisible partner that allows businesses to build their own online brands.

It handles the “dirty work” of online selling… like payments, shipping, and marketing… without taking any of the credit. In fact, last year almost 300 million people bought something on Shopify without even knowing it existed.

This is why it’s fast becoming the “go-to” solution for anyone wanting to sell anything online.

Shopify now powers over one million merchants from 175 countries. And these businesses sold $60 billion worth of goods through its platform last year.

Shopify estimates there are 47 million small businesses that it doesn’t serve yet. It collects $1,650/year from each merchant, on average. That means Shopify could potentially rake in $80 billion/year.

Sales hit $1.5 billion last year. Shopify’s revenues could soar 10X and it would still have captured just 20% of its target market.

And that’s not even counting the larger brands Shopify is serving.

It already hosts websites for giants like Unilever… Red Bull… Heinz… Budweiser… Pepsi… and Nestle. And these big firms typically pay $2,000 per month for Shopify’s premium offering, Shopify Plus. 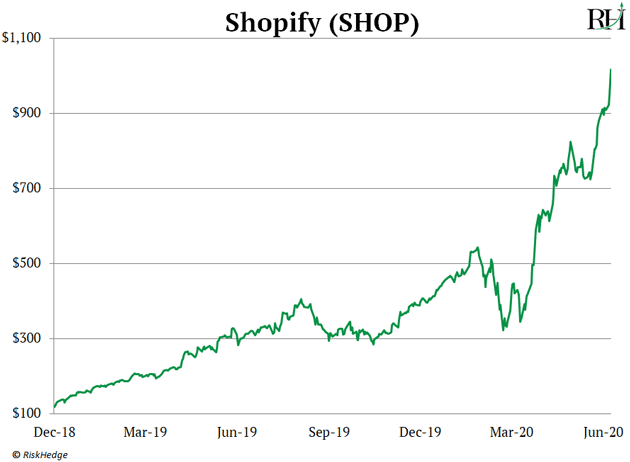 That’s a big gain in a short period, so I wouldn’t go “all in” on the stock here.

But remember this: Online business is still only in its first inning.

Shopify is the key to unlocking business on the internet for millions of mom-and-pops.

It’s one of the most important internet companies investors aren’t paying attention to.

And I expect by 2030, we might be talking about Shopify like we talk about Amazon and Apple today.

P.S. Shopify’s not the only internet company I’m betting on today…

I recently released an important briefing on a new internet “tollbooth” stock set to rip (at least) 200% higher as it cripples Amazon’s growth.

And the best part? It’s currently just 0.6% the size of Amazon… so we’re talking enormous upside from here.

Today, a reader asks about “The Amazon Killer” – aka the only stock I own in my daughter’s college fund:

This morning I downloaded a report entitled The Amazon Killer. I am unable to find it again. I would like to send it to both of my adult children in the hopes that they will join the RiskHedge family. Would you please send me the link so I can get it in their hands?—Blair

Hi Blair, thanks for writing in. Here’s that link. Hope to have them both onboard soon!