The Crisis That No One’s Talking About…

A mentor of mine told me this early in my career.

At the time, I thought it was a bit harsh. But the words stuck with me.

They helped make me the investor I am today. Unlike many investors, I try not to overcomplicate my investing.

One way I keep things simple is by concentrating most of my money on “megatrends.”

They play out over many years… sometimes decades.

The rise of the internet, the “digitization” of money, and the explosive growth in social media are some of the biggest megatrends of the last decade.

Savvy investors who got in on these megatrends early made an absolute killing.

What makes these trends special is that they powered ahead despite financial crises and recessions.

That’s why betting on megatrends can be so lucrative. They’re unstoppable. It doesn’t matter what’s happening with the economy or financial markets.

Today, I’m going to tell you about another megatrend that’s playing out before our very eyes.

But take a look at this chart first.

It compares the performance of the iShares U.S. Medical Devices ETF (IHI) with the S&P 500.

IHI invests in a basket of medical devices stocks. These companies make products that help diagnose, prevent, and cure diseases. They sell everything from artificial joints to robotic surgery systems.

When the line on this chart is rising, it means medical device stocks are outperforming the broad market. When it’s falling, it means they’re underperforming. 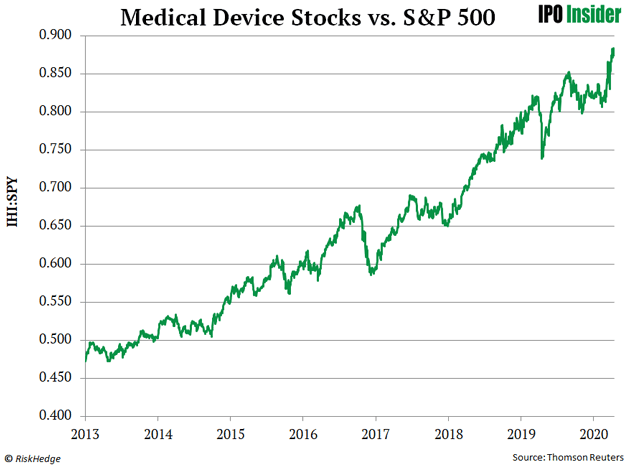 Medical device stocks have been crushing the market since 2013. During that stretch, IHI surged more than 258%. That’s nearly triple the S&P 500’s return during that time.

That’s staggering outperformance. But this trend is unlikely to reverse anytime soon.

It’s no secret that America’s getting older.

By 2060, the number of Americans 65 and older will double to nearly 100 million people.

This isn’t just playing out in the United States. Populations in many large Asian and European countries are also aging. In fact, 26% of the population in Japan is already over the age of 65. In Italy, Germany, and Portugal, that figure tops 20%.

This is great news for the entire medical device industry. Older people account for the vast majority of medical expenses. In the United States, people age 55 and over account for 56% of all healthcare spending… despite making up just 29% of the population.

And most investors would do just fine by owning IHI.

But there’s a special group of medical device stocks that will deliver even more explosive gains in the coming years.

I’m talking about the companies that are tackling the diabetes crisis.

Diabetes is a disease that occurs when your blood glucose (or blood “sugar”) is too high. It affects 463 million adults (1 in 11) worldwide. Last year, an estimated 4.2 million deaths were caused by diabetes.

You can see below that its stock is skyrocketing. It’s jumped 131% since last April… and over 500% since October 2017. During that stretch, Dexcom outperformed IHI by more than 12X. 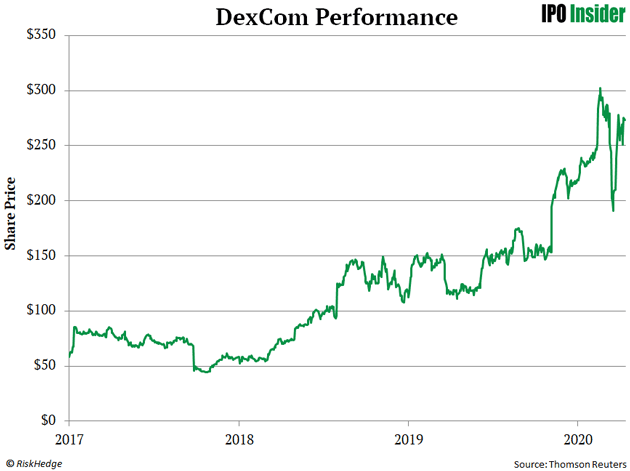 It sells insulin pumps for people living with diabetes. PODD has spiked 93% since last April… and an incredible 479% since the start of 2017. Like Dexcom, PODD also outpaced IHI by a wide margin during that explosive run. 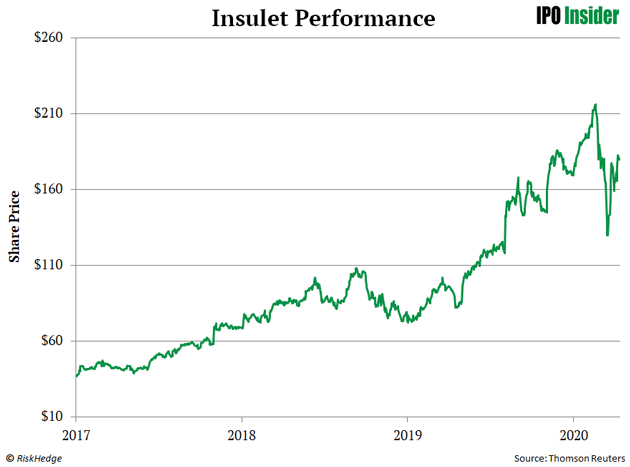 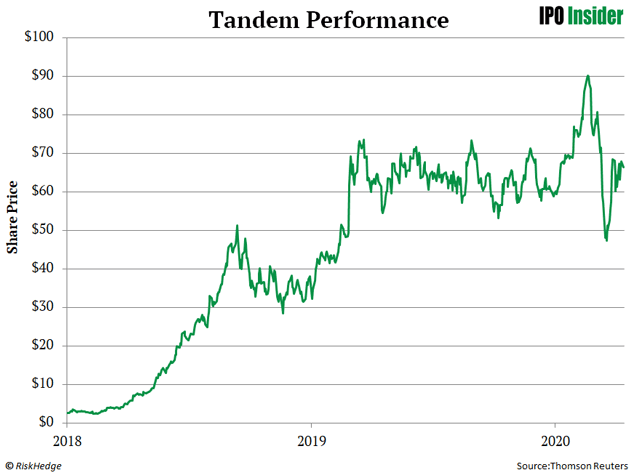 These types of companies should continue to soar in the coming years as they tackle one of the country’s biggest epidemics.

According to a 2018 study, the number of US adults with diabetes is projected to hit 39.7 million by 2030. That would represent a 53% spike from today. At that point, nearly 13% of the US population would suffer from diabetes.

Not only that, the number of elderly people (ages 65 years and older) with diabetes is expected to increase nearly 4X by 2060.

And unlike coronavirus, there will be no vaccine for diabetes. That means people with diabetes are relying on the very best medical device companies.

It’s why medical device companies like Dexcom, Insulet, and Tandem would make a great addition to most investors’ portfolios.

But there’s one “diabetes stock” that stands head and shoulders above the rest.

Unlike the companies mentioned above, this company doesn’t build insulin pumps or other medical devices. Instead, it uses data science and advanced technologies like artificial intelligence (AI) to help people with diabetes live healthier lives.

It’s a “next-generation” diabetes stock. And I’d bet that less than 1 out of 100 investors have even heard of it.

The company has already inked deals with many of the largest US corporations. It also reported blow-out earnings last month. And it raised its sales guidance just a few days ago!

That’s right. This company isn’t getting weaker because of the coronavirus like most companies. It’s getting stronger.

But don’t worry if you missed out on this initial surge. This revolutionary company has the potential to become one of America’s most important healthcare companies. The stock has “10 bagger” written all over it.

You can learn all about this company by signing up for my service, IPO Insider. To get all the details (including how you can get 40% off the retail price), go to this special link we just opened up for RiskHedge Report readers here.

First of all I want to thank you for your reports—these are what I call really good analysis.

I actually don’t buy stocks right now. For me the markets are too volatile now. Today +10%, tomorrow -7% and so on… that is not normal for me…

So I just wait until these ups and downs will no longer happen… I have to say, that these crises and bear markets, etc., are huge chances for investors in the long run.

Now, it’s like Black Friday (you can buy stocks at 20% or even cheaper)—that’s how I look at this whole thing.

I wish you all the best and stay healthy.

Are you taking advantage of today’s “stupid-cheap” prices? If so, what kind of stocks are you buying today? Let me know at jspittler@riskhedge.com.

I hope you and your family are staying safe.