“Put down the phone!”

Chris’s note: Markets are closed today, so we’re doing something a little different...

Below you’ll find one of my all-time favorite essays from Stephen McBride. In it, Stephen shares his #1 piece of advice to living a happier life: Stop staring at your phone!

Stephen: “Put down the phone!”

“Look at that table… everyone is staring at their phones.”

My wife and I are on the same page with money. We’re both savers. I often joke we get more enjoyment out of watching our bank balance grow than we do buying stuff.

But we recently splurged on a nice restaurant.

After being cooped up in the house for the last four months, it was nice to finally get out!

We booked a babysitter in advance so we could have a nice meal at Restaurant Patrick Guilbaud here in Dublin. It has a coveted two Michelin stars, and it’s one of the best dining experiences you could imagine. It’s not cheap. You’ll hand over at least $500 for two people, but it’s worth it. You’re treated like royalty, and the food is amazing.

We spotted a table of four from across the room. About halfway through our meal, my wife leaned in and whispered, “Look over at that table… everyone is staring at their phones.” She was right… everyone at the table had their heads stuck in their phones—as they sat in the best restaurant in Ireland!

The rise of the internet and smartphones has mostly improved our lives. High-speed internet allows us to work from anywhere in the world. Thanks to Google, you can access practically any information 24/7.

The downside is many folks are hopelessly obsessed with tapping, typing, and swiping on their phones.

Research from Harvard shows the average American touches their phone over 3,000 times daily. 3,000 times!... which works out to roughly four hours/day staring down at our screens. Think about it like this… that’s 28 hours/week we could spend doing something we “haven’t got the time for.”

In the morning, our phones buzz to wake us up. Emails stream into our inboxes all day long. Even when you don’t have any notifications, you might whip your phone out every few minutes or so to check if there’s anything new.

In short, we’ve become addicted to our phones—even more so during the past four months thanks to the coronavirus—and it’s hurting our lives.

Smartphones are a black hole where “to-do lists” go to die. Research from the American Phycological Association (APA) shows we have limited “brain power.” Said differently, our minds are like batteries—they can only perform a finite number of tasks before they need to be recharged.

Phones put the world at our fingertips. The next article or video is always just one click away. Each time we whip out our phones to check the news… the latest sports scores… or our Twitter feeds… we are “draining” our mental batteries.

The average American does this roughly 1,000 times before lunch, leaving no energy for important work. The APA study found this puts our brains into a state of constant distraction. We can’t focus on important tasks for more than 10 minutes without checking our phones.

Research from The Journal of Social Psychology found smartphones are also hurting our relationships. Researchers found when participants had their phones on them during a meal, it reduced their enjoyment during the time spent eating with family and friends.

Our phones allow us to connect with folks across the world… but they’re hurting our relationships with the people that matter most.

There’s a reason putting our phones down is so difficult. Did you ever hear of the chemical dopamine? Our brains produce dopamine to reward for us taking a bite of food… completing important work… or exercising. We get a little hit of dopamine when we do something “good,” which motivates us to repeat the tasks.

Research from Harvard Medical School shows companies like Facebook, YouTube, and Snapchat have engineered their platforms to give us bite-sized hits of dopamine. Every time we scroll, click, or swipe, our brains get a little “reward.”

Constantly being on my phone is something I struggled with before COVID-19 hit. I hated how I would reflexively check my phone a dozen times an hour when spending time with my baby daughter. I wasted whole evenings on YouTube. I wasted valuable time in the morning scrolling through Twitter.

During these lockdowns, I’ve become closer than ever with my family. I’ve made a conscious effort to turn off my phone outside of work hours. And I shut down the computer once I finished work for the day. This one change—cutting down time spent on the internet—has improved my life big time.

I’m more productive when I’m working… I’m a better person to be around (so my wife tells me)… and my mood has greatly improved.

If I can make a suggestion as for the rest of 2020 and beyond... consider cutting down on time spent on the phone, computer, and internet. For me, it’s tempting to ALWAYS be trying to learn new things. I’d listen to podcasts while I worked out... read articles as I ate breakfast.

There’s so much great information on the internet today, I felt like I was missing out if I wasn’t always absorbing as much as possible. But really, by constantly staring at or listening to my phone, I was often missing out on real life.

If you’ve felt this way, try putting down your phone. Do something “real” and be in the moment. Go for a walk... throw a ball with your dog... cook a dinner for your family. I practically guarantee it’ll make you happier—it did for me!

Do you think smartphones are bad for our mental health? Let me know at stephen@riskhedge.com. 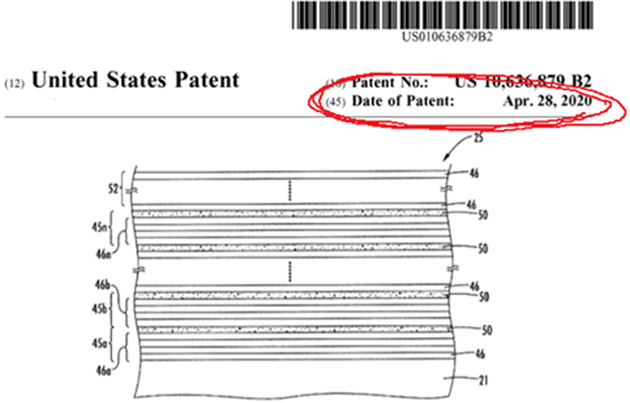 But because the patent was quietly granted while the world was fixated on corona...

It’s flying totally under the radar!

Now the tiny company that invented it is about to announce it to the world...