The reports of my death are greatly exaggerated.

Legend has it author Mark Twain said this famous line.

When he was out of the country, a rumor spread that Twain was dead. He put it to rest with this clever statement.

I’m telling you this because rumor of a different (but equally wrong) death is floating around markets right now.

Believe it or not, many people think the initial public offering (IPO) market is dead.

If you’ve been reading my essays, you know I specialize in IPOs...

And I don’t want to spoil the punchline, but...

I love that this rumor has taken hold.

I love that the average guy thinks IPOs are dead.

Because it means hunting for big IPO profits is “contrarian.”

And the biggest profits usually flow into the pockets of investors who can think independently of the crowd.

I can tell you with 100% certainty that not only is the IPO market alive and well...

If you can see past the phony headlines, you can set yourself up to collect big profits in the months ahead.

118 private companies have gone public, and that number grows by the day.

Why would anyone think the IPO market is toast? Well, as you likely know, a handful of big, hyped-up IPOs have flopped.

I’m sure you heard about Uber (UBER). The ride sharing company went public in May at a staggering $82 billion valuation. It was ridiculously overvalued.

Not surprisingly, its stock fell straight off a cliff: 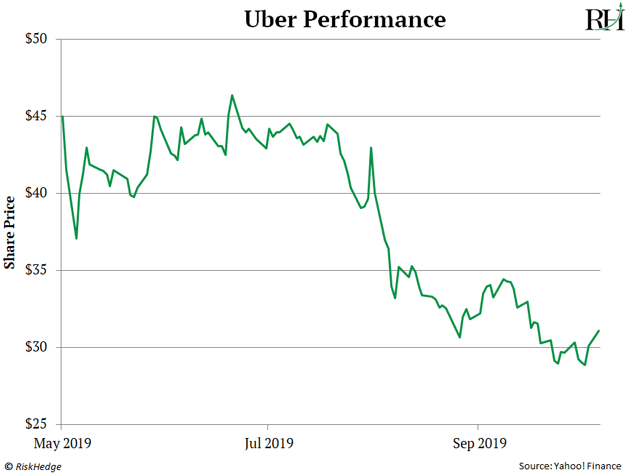 Uber plunged 36% since it went public just five months ago.

Lyft (LYFT) has fared even worse. It’s plummeted 48% since its highly publicized IPO in April.

And don’t get me started on WeWork, which failed to even get its IPO out the door.

I get it. It’s like an accident on the side of the highway. Everyone slows down to see the carnage.

But just like a car crash, failed IPOs are nothing more than a distraction.

A distraction from great moneymaking opportunities.

You probably know about Beyond Meat (BYND) by now, which got its fifteen minutes of fame earlier this year when it soared 859% in less than three months.

But when’s the last time you heard CNBC talk about CrowdStrike (CRWD)?

CrowdStrike is a cybersecurity technology company that went public in June. Cybersecurity isn’t a sexy business. So, its IPO didn’t get much press.

But it should have. CrowdStrike’s share price has tripled two months after going public. 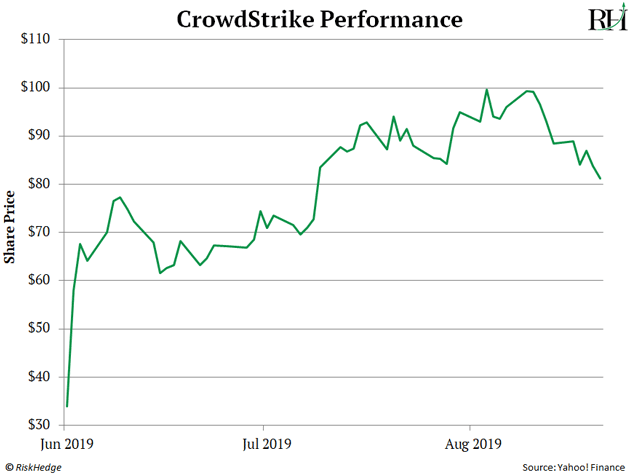 Shockwave Medical’s (SWAV) explosive IPO has also been overlooked. Shockwave is a medical services device company that went public in March. Its share priced zoomed more than 300% during its first three months. 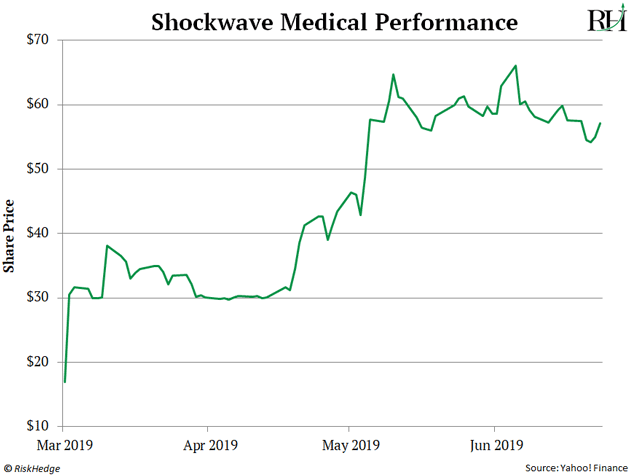 Even if you’d bought just one of these big winners, you’d be blowing the average investor out of the water.

Of course, anyone can “cherry pick” a few big gains to prove a point. So let me give you the full picture...

Since October 2017, 21 IPOs are still up at least 100%. I emphasize still because markets have been a little shaky lately. But not nearly shaky enough to erase all those triple-digit IPO gains.

If you had a brokerage account, these profits were available to you. All you had to do was buy these stocks shortly after their IPO day.

These folks are wrong.

Eight companies have gone public since WeWork shelved its failed IPO a few weeks ago.

Three more are set to go public later this week.

And that’s just a taste of what’s to come. According to Renaissance Capital, 31 companies have filed or updated paperwork to go public in the last 90 days.

And let’s not forget…

Airbnb just announced its plan to go public in 2020. Airbnb is one of the world’s most disruptive companies. It was most recently valued at $35 billion—making it the fourth biggest US “unicorn!”

They’re called unicorns because they used to be rare. But that’s no longer the case.

According to CB Insights, there are now 402 unicorns. Together they’re worth more than $1.3 trillion.

Many of these companies are eying the public markets and planning their IPOs.

And what most people don’t realize is most of today’s unicorns aren’t startups.

If you read my September 29 essay, you know why that’s important.

The median IPO generates sales of $174 million today. That’s 15 times more revenue than the typical company at IPO in 1999 was doing.

In other words, unlike in 1999, many of today’s IPOs are ready for the “big leagues.”

Big Four accounting firm Ernst and Young (E&Y) sees a stampede of IPOs on the horizon.

It wrote in a recent report that it expects “a flood of IPOs to come to the market.”

I hope I’ve made it clear a lot of money will be up for grabs in IPOs in the next couple years.

As I mentioned, 21 IPOs have handed investors a quick double or better in the last two years.

In the next two years, as the IPO market really gets rolling, I wouldn’t be surprised if we get 40–50 new opportunities to double our money or better.

PS: Here are two upcoming IPOs on my watchlist:

Procore—a company that provides construction management software—is set to go public before the end of the year or in early 2020.

GitLab, which operates a platform for developers to create, review, and deploy code, is also set to go next year.

I'll update you as these stories unfold.