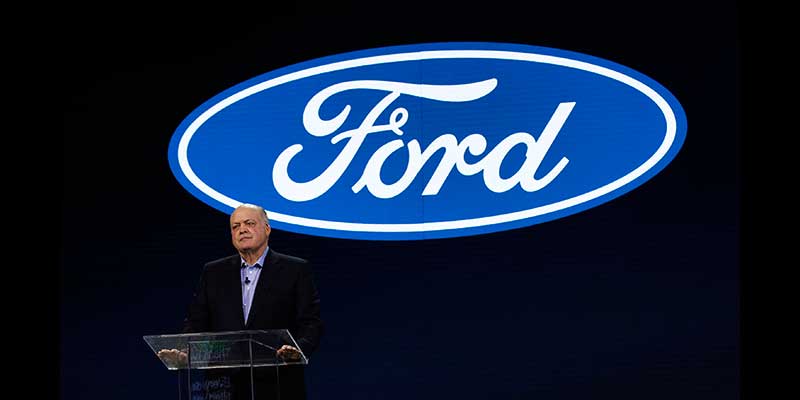 I Forbid You to Own this Popular Stock

I'm imploring you not to buy its stock… no matter what the cheerleaders on CNBC say.

Tens of millions of Americans buy this company's products every year. Even more own its stock, both directly and through index funds.

They're going to regret it… because there's almost nothing this doomed company can do to avoid being steamrolled by unstoppable disruption.

After you read this letter, consider forwarding it to your family and friends who invest. Everyone with a 401(k) should know to steer clear of this toxic stock.

Waymo, Google's (GOOG) self-driving car subsidiary, is leading the way. Within three months, it will launch a robo-taxi service outside of Phoenix.

It'll be like Uber, but with no drivers. The cars will drive themselves.

Driverless cars are going to be a wonderful thing for the world. Drunk driving will become a thing of the past. Elderly folks who can no longer drive will regain independence. Moms and dads can work on their commutes and spend more time with the kids when they get home.

Not to mention driverless cars will save us a ton of money. They'll all but eliminate the need to own a car for the 63% of Americans who live in urban areas.

Cars are one of the biggest expenses for American families. A typical two-car household drops about $1,000/month on car payments, insurance, registration, inspections, repairs, parking, oil, and gas.

Driverless cars can make these expenses vanish. Any financially savvy person will have to seriously consider giving up their car when they can instead summon a robocar to pick them up anywhere… anytime.

The auto industry is very big and very important. According to the Bureau of Labor Statistics, the American auto sector employs about 4.3 million people.

Carmakers, dealerships, repair shops, parts makers, and so on make up 3% of the US economy. Collectively, publicly-traded American auto companies are worth over $300 billion.

Every company is at risk as self-driving robo-taxis put a crater in car ownership.

You see, the whole auto ecosystem depends on Americans buying many millions of new cars every year. For decades, rising car sales have been the norm. Driverless cars are all but guaranteed to kill it.

Now, car sales won't fall off a cliff right away. There are lots of places in the US with icy mountain roads that driverless cars won't be capable of navigating for at least a decade. Folks who live in these places will continue to own cars with old-fashioned steering wheels.

A new report from Boston Consulting Group (BCG) predicts car ownership will plunge by 46% by 2030 if robo ride-sharing services takeoff. My research puts the number closer to 30%.

Either way, it represents a rapid "shrinking of the pie" of global car sales. This is key.

Making and selling cars is already a ferociously competitive business with low margins. And that's with an auto market that's generally been growing for the past several decades. As the pie starts to shrink, competitors will have to eat each other alive just to survive.

To be clear, not every auto company will go broke. Those that adapt and partner with self-driving car platforms like Waymo can thrive.

For example, rental firm Avis (CAR) cleans and services Waymo's driverless fleet. Since it signed the agreement Avis shares have climbed over 60%.

But things are about to get very tough for the auto industry. You want to keep your money far, far away from any car stocks with questionable finances or poor management.

Ford has plunged 50% in the past five years, to its lowest point since 2009, as you can see here: 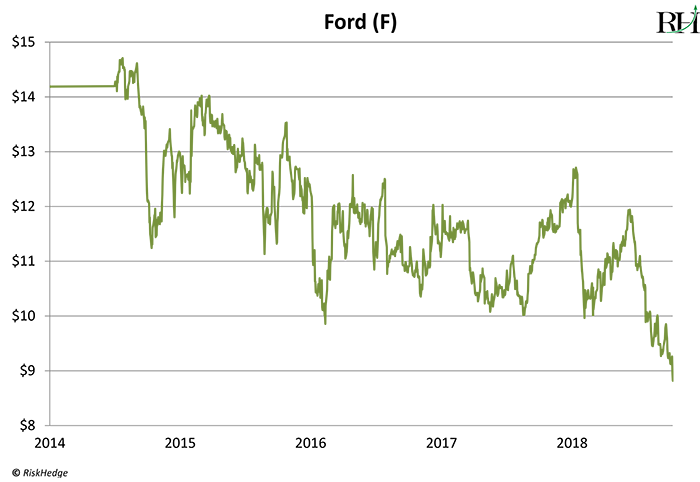 Many folks see this as an opportunity to buy Ford at a cheap price. They see an iconic American company selling at 5x its earnings… and think "value stock opportunity."

They're flushing money down the toilet.

Did you know Ford's business has been slowly dying since well before self-driving cars were even on the radar?

In the past three years, Americans bought a record 52 million cars. Ford is the country's second-largest carmaker. So you'd think its sales should be booming.

Its sales are not booming. Last year Ford sales were lower than in 1999! And this year it's on track to sell even less.

Meanwhile, Ford's US market share has plunged to its lowest ever. In the '90s every fourth car sold in America was a Ford. Now it's every seventh car.

Let me drive this point home: Ford is struggling even with auto sales near an all-time high.

What do you think will happen when driverless cars begin to eat into sales?

In July it announced a restructuring that will cost $11 billion. Ratings agency Moody's downgraded Ford's credit rating to one notch above junk status on the news.

Ford already has 4x more debt than cash. And given it only earned $7.6 billion last year… it can't afford to spend another $11 billion.

Ford's precarious financial position stems from its poorly-run business. Its operating margin is just 3%. Meaning for every $20,000 car it sells, it must spend $19,400 to sell it.

That's bad, even for the auto industry where margins are famously low. General Motors (GM), Ford's closest rival, has a 6% operating margin.

And just as important, to avoid being caught on the wrong side of it. That's why we're slapping a "BLACKLIST" sticker on Ford. As I said up top, if this stock is in your portfolio, get rid of it now. And forward this letter to your family and friends who might own it.

Will you ditch your car as driverless cars go mainstream? If not, why not? Tell me at stephen@riskhedge.com.

Yes we do. We follow gold stocks because they're one of the most explosive asset classes on earth, capable of returning 10x in a short period. For example, did you know gold stocks have exploded for triple- or quadruple-digit gains seven times in the past 48 years?

Above all else, the key thing to understand about them is they're cyclical, meaning they go through big booms and busts. These sweeping trends usually take all gold stocks along for the ride. So it's almost always a bad move to go against the primary trend. When gold stocks are in a bust, like they are today, the high-quality gold miners get dragged down right along with the average and poor ones.

GDX, the biggest gold stock ETF, is plumbing 2+-year lows today. I'm interested in buying gold stocks, but I'm waiting until I see some indication that the trend has changed.