How the Green New Deal could hand you 300% profits

Have you heard of Alexandria Ocasio-Cortez?

At 29 years old, she’s the youngest Congressperson in history.

She’s a founding member of the Democratic Socialists of America… and she makes Obama look like a right winger.

“AOC,” as she’s often called, is quite a sensation among young left-leaning folks. 2.4 million fans follow her on Twitter.

You might think of AOC as the Democrat version of Trump. She has rallied support by championing ideas that sound great to a certain type of person. Like giving free money to those “unwilling to work.”

In a now-redacted factsheet, AOC promised to provide “economic security for all who are unable or unwilling to work.”

The document caused so much blowback that AOC’s team pulled it down from the internet.

Like any Socialist, AOC is full of “ideas.” Most of them involve taking money from one group of people and giving it to another.

She’s calling for a 70% top tax rate, for example. And free college.

But I want to set politics aside to tell you about her silliest idea of all.

One that soared 3,000% the last time it was launched into a bull market.

AOC has called climate change “her World War II.” She wants to eliminate dirty energy like coal, oil, and gas that pollute the air.

Her plan calls for every house… apartment… office… factory… car… and train in the entire country to be powered by renewable sources like solar and wind.

Sounds pretty good, right? A clean environment is important for all of us. I certainly want my young daughter to grow up breathing clean air.

But there’s one BIG problem with AOC’s plan.

According to AOC "there is no place for nuclear power” in America’s future.

Many folks think nuclear power is dirty and dangerous. They associate it with big smokestacks and nuclear bombs.

These folks could not be more wrong. Nuclear is the best source of renewable, clean energy we have.

It doesn’t cause any pollution. The steam drifting out of nuclear plants is as harmless as the steam from your shower.

It is also the safest energy source on the planet, according to the World Health Organization.

There are 99 nuclear reactors in the US. They generate twice as much clean energy as every solar panel, wind turbine, and other clean energy source combined.

For one, it would cost trillions upon trillions of dollars.

Also, we need energy sources that are dependable and “always on.” This is a major problem for solar and wind.

Solar power is interrupted by darkness and clouds. Wind turbines only work when the wind blows.

As you likely know, nuclear power plants use uranium as fuel to produce electricity.

But the uranium sector has collapsed since 2011.

It began with the freak accident in Fukushima, Japan. First, the most powerful earthquake in Japan’s history caused a reactor to shut down. Then a tsunami disabled the emergency generators.

This caused a disastrous nuclear meltdown that contaminated a large area and killed and injured many people.

Japan shut down all but two of its reactors after the Fukushima disaster. Many other countries followed suit.

Germany moved to phase out nuclear power completely. And plans to build four new reactors in America were shelved.

This led to the vast majority of uranium companies shutting their doors.

In 2011 there were 585 uranium companies. Just 40 remain operational today.

And most of the survivors have seen their stocks plunge 90% or worse.

Last year uranium production in the US dropped to its lowest level since the 1950s… because virtually no producer can make money at today’s depressed prices.

You can review my whole case for uranium here.

In short, nuclear use around the world is growing.

57 new reactors are currently being built. And uranium demand is expected to rise 23% by 2025.

Yet uranium stocks are priced as if nuclear energy is being phased out altogether.

Despite what the Green New Deal says, it’s not. I guarantee nuclear power will be a big part of America’s and the world’s clean energy future.

It’s hands-down my favorite uranium stock. In fact, it’s one of my top picks for 2019, period.

I recommended Cameco to you in August. 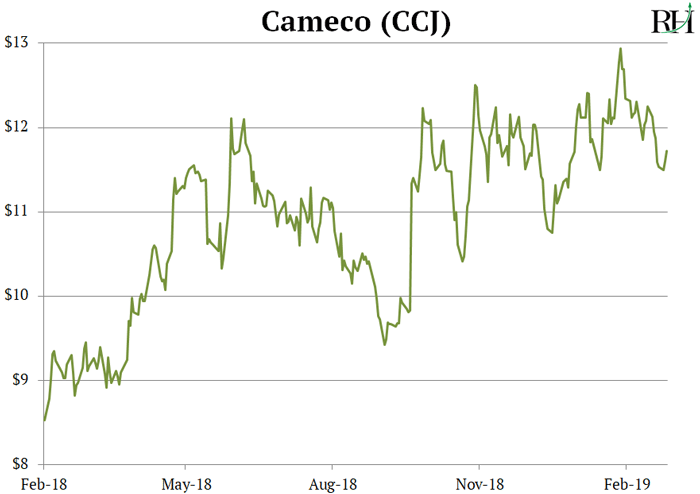 Cameco produces around 15% of the world’s uranium. It operates two of the highest-quality uranium mines in the world. Both are located in Canada’s Athabasca Basin. The quality of the uranium there is 100x better than the global average.

This allows Cameco to produce uranium for less than its peers. Most companies mine it for $50–$60/lb. Cameco does it for around $35/lb.

A key thing to know about uranium stocks is they move in massive cycles. The “up” part of the cycle can produce some of the biggest gains you’ll ever see.

Over the next few years as reality dawns on the markets, we have a great shot to triple our money or better in Cameco. And given that it rocketed 30x in the last uranium bull market, it could easily go a lot higher.

That’s it for today. What do you think of the Green New Deal? Tell me at stephen@riskhedge.com.

RiskHedge reader Cason has a question about the stocks I cover in the RiskHedge Report:

I've been a subscriber for a few months and I wanted to say thank you! I appreciate you putting your money where your mouth is.

Do you plan on giving advice on how/when to exit the picks that you give? I know that it is of equal importance to sell at the right time as it is to buy.

Thank you for the awesome letter.

Thanks for writing in Cason. I don’t track my ideas in an official “portfolio” in this letter. But I’ll often follow up on my favorite ideas in a future issue, like I have recently with Disney (DIS) and 5G. And I’ll often let you know when my opinion on a stock changes, as I did last week when I mentioned I sold The Trade Desk (TTD) for a 120% gain.

Since you asked, you may be glad to know I’m developing a new letter where I’ll keep a portfolio and tell you exactly when to buy and sell the stocks I recommend. I’ll have more details for you in early spring.