Whilst America was founded on the principals of limited government, with its founders having an almost phobia dislike for state encroachment, times have changed.

So, given that government spending now accounts for over 1/3 of GDP, where is all the money going?

Government presence has not only grown in traditional state sectors like defense, but also in healthcare, education, and financial services.

This expansion can be seen clearly in the healthcare sector, where public and private spending combined now account for 17% of GDP, up from 6% in 1970. The reason for this massive increase—since 1970, the number of doctors has barley doubled, whilst the number of “administrative employees” has shot up 3000%. But to find the root cause of this problem, we must dive a little deeper.

This mountain of new regulation, which is estimated to cost the US economy $1.88 trillion per annum, is one of the main reasons healthcare is so costly. Given that technological improvements have automated many medical practices, if the industry did not carry this regulatory burden, prices would be plummeting.

The American education system is in a similar predicament. Since 1970, there has been a 60% increase in the number of teachers, with the number of administrators increasing twice as much. Today, teachers only account for around 50% of public school staff, down from 70% in 1950.

Along with driving up costs in the public sphere, government has also been meddling in the private arena.

As one in every three dollars spent in America now stems from the government, supplier contracts mean big business. One way corporations can increase their chances of acquiring these contracts is by lobbying politicians.

A 2014 study by The Sunlight Foundation found that “Between 2007 and 2012, 200 of America’s most politically active corporations spent a combined $5.8 billion on federal lobbying and campaign contributions.” Sounds like a lot of money, but what about the return on investment? The study also found that in the same period of time, said corporations received “$4.4 trillion in federal business and support.”

Sunlight also found that of the $3 trillion in federal contracts awarded during the period, $1 trillion was awarded to the top 200 political givers—a loyal business partner indeed.

But these political favors go beyond lucrative contracts, they also include direct subsidies.

The biggest recipients of government subsidies, such as Boeing and Intel, are coincidently, some of the biggest political lobbyists and contributors. Politically connected corporations were also the largest recipients of TARP funds, which were handed out after the 2008 financial crisis. Just 16 firms received over 70% of the $430 billion available.

Whilst government bureaucrats have been granting special favors to politically philanthropic firms, the Federal Reserve has been doing its utmost to help its friends.

On the campaign trail, Donald Trump repeatedly accused the Federal Reserve of politicizing interest rates, saying the US economy is in a “big, fat, ugly bubble” as a result. The president-elect didn’t provide any proof for such accusations, and Federal Reserve chair Janet Yellen has denied his claims. So, what can the non-partisan numbers tell us?

Whilst federal government debt and the Federal Reserve’s balance sheet have gone hyperbolic, the federal funds rate is near all-time lows. Even as key economic metrics have improved following the 2008 crisis, despite much jawboning, the Fed has only raised rates once since June 2006.

Another trend which suggests monetary policy has been politicized is the below chart from AdvisorPerspectives. The monetary concoction of quantitative easing (QE) and zero interest rate policy (ZIRP) has forged roaring bull markets in both stocks and bonds, signaling a healthy, vibrant economy. 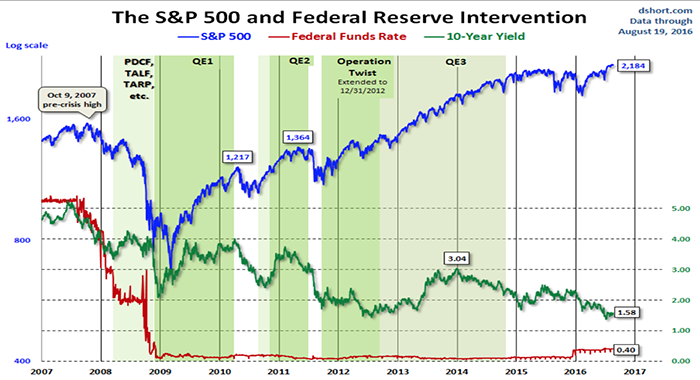 As the above chart shows, investors have piled into the S&P 500 following almost every bout of monetary stimulus since 2008, showing that the Fed’s perpetual market interventions have altered decision making in the investment industry.

This intervention has led to investors and financial institutions making risky investments they otherwise wouldn’t have because they know the Fed will come to the rescue of the market.

So, what risks does the government’s heavy involvement in the economy pose to us?

Markets have been distorted as a consequence of the government becoming involved in almost every part of the economy.

When analyzing companies, it is no longer sufficient to carry out thorough due-diligence on their financials, evaluate management, and assess the company on merit alone. Investors must now consider whether the firm has favorable political connections, whether they will be granted all-important permits, and if the regulatory environment is in their favor—constant guesswork.

Artificially low interest rates have pushed down yields on Treasuries, to the point where investors can barely earn returns that outpace inflation. In the case of many European “investment grade” bonds like German Bunds, yields are negative—James Grant calls this “return-free risk.”

This has forced money—which would usually be looking for a safe harbor—into equities and in particular, dividend equities. This blind search for yield has led people to ignore overvaluation in the space, which could cause huge losses if markets took a turn for the worse. The search for yield has also funneled “safe money” into emerging market debt, which would take a hit if interest rates were to rise, as is now expected.

Low rates are also having a serious impact on pension funds. There are numerous examples of pension funds basing their forward projections on annual returns in excess of 5%. However, in a low interest rate world, these funds are massively underperforming. To try to meet their long-term obligations, funds must now make riskier investments.

Along with distorting the investment landscape through political favors and monetary policy, America’s fiscal ill-discipline has also been troublesome. As a result of out-of-control government spending, American’s taxes have increased. In 2015, the combined Federal, State, and Local tax “take” was $6.5 trillion, an increase of 96% in fifty years.

In conjunction with increasing taxation, excessive regulation is strangling the American economy. A 2014 study by the National Association of Manufactures (NAM) found that the industry average regulatory compliance cost per employee was $19,564. More than double the still exorbitantly high $9,991 per employee outside the manufacturing sector.

As many regulatory costs are fixed, regulation hits small businesses—the backbone of the American economy—disproportionately. The NAM study also found that regulatory cost per employee for manufacturing firms with less than 50 employees was an astounding $34,671. This is a huge burden for a sector which makes up 12.1% of GDP.

This massive increase in regulation has also driven healthcare costs through the roof. As a consequence, the average American family now spends $18,142 per annum on health insurance.

Besides having quantifiably negative impacts on the economy, the politicization of America has given birth to a dangerous “government must fix-it attitude.”

Whether it’s a dying forest, a lack of housing, or a raging civil war 10,000 miles away, you will hear cries of “the government must do something” to fix the problem. Of course, this simply leads to more government intervention and spending, which—judging by the war on drugs or terror—has had the opposite of its intended effects.

Although there is not much one can do about low interest rates, excessive regulation, or increasing taxation, the politicization of the economy has created some opportunities.

Roll with The Punches

Take subsidies in the clean energy space for example. In March 2008, First Solar (FSLR) was trading at around $292 per share, with a P/E ratio of over 500 and a P/B ratio of over 20. It was clear to anyone looking at FSLR’s financial metrics that the company was overvalued.

The stock had been bid up beyond any fair valuation metrics, on the back of President Obama’s election, with the promise of endless subsidies. Today, First Solar trades around $30. Seeing that the company was ridiculously overvalued, largely due to political reasons, speculators could have sold FSLR short and made huge profits.

An example of a whole sector which has risen largely as a result of political actions is the healthcare sector. Whilst the Affordable Care Act (ACA) has been a disaster for patients, it’s been excellent for healthcare stocks. Since the ACA was signed into legislation in March 2010, XLV—the largest healthcare ETF—has risen 55%.

Understanding that the American economy and investment markets are politicized, astute speculators can take advantage of the distortions which are created as a byproduct.

Whilst one can certainty make returns in speculation, you can also lose big. The downside of speculating is, well, that you’re doing just that. We always recommend that individuals only speculate with money they can afford to lose half of. With that being said, where is one to put the rest of their money in this low interest rate environment?

Just like Benjamin Graham and a long list of the world’s most serially successful investors, we believe value investing is the single best strategy for investing. Whilst it may not earn you the extraordinary 1000% returns you can get speculating, value investing—investing in under-valued, quality companies—is as close as you are going to get to a sure-fire way of earning consistent returns.

A study from Fidelity Investments, which tracked annual returns in the S&P 500 and a multitude of value and growth indices from 1990–2015, found that value indices consistently outperformed both general and growth indices.

Whilst one must take political risk into account in today’s markets, finding quality companies that are undervalued is an excellent approach to take towards your investments.

Regardless of their political connections—quality, undervalued companies will get snapped up sooner or later. Therefore, value investing can help investors manage the political risk which is prevalent in today’s markets.