Invest in what you know.

Lynch, as you may know, ran the famed Magellan fund from 1977 to 1990. During that stretch, he generated average annual returns of 29.2%... good enough to cement him among the greatest investors of all time.

According to Lynch, everyday investors could also crush Wall Street by investing in companies they can easily understand.

The key is to take notice of your immediate world. This can help you unearth great stocks long before they appear on Wall Street’s radar… like the one I’ll tell you about today.

This recently IPO’d stock has been on my radar for months, but a quick trip to the hardware store over the weekend confirmed everything I needed to know.

I’ll explain why in a minute.

When I was a senior in high school, I ate at Chipotle (CMG) roughly three times a week.

A bit excessive. I know. But I wasn’t alone.

Most of the guys at my high school were also obsessed with Chipotle.

Now, I didn’t know much about investing back then. And Chipotle was still a private company—it hadn’t IPO’d yet. But I didn’t need a degree in finance to recognize Chipotle’s potential.

I should have trusted my instincts… 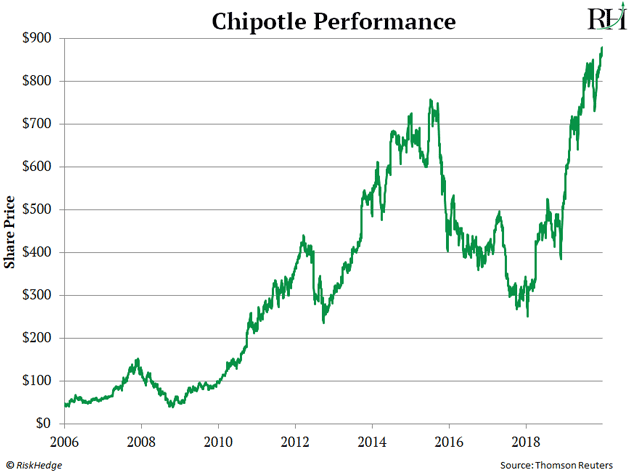 I was a senior in college, and I noticed something strange.

DVDs wrapped in red paper packaging started showing up in my apartment’s mailbox.

My roommate subscribed to a service called Netflix (NFLX).

This was back before streaming took off. No one owned a smart TV.

Still, I saw that Netflix was on to something big. But once again, I passed on investing in it.

Instead, I wrote a paper about why Netflix would make a great investment. The stock has skyrocketed 5,384% since then. It was the top-performing stock of the last decade! 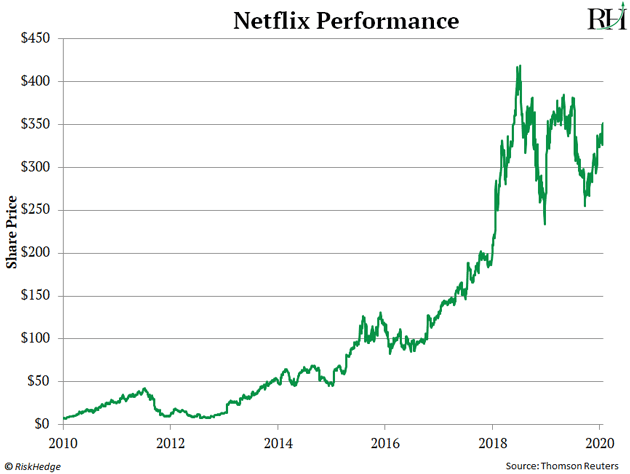 After those two costly mistakes, I learned a valuable lesson. Never discount what I see with my own eyes.

I was at the hardware store helping my grandma buy a lightbulb for her front porch.

When we went to pay, something caught my eye. There were tons of Yeti (YETI) products right next to the checkout counter. 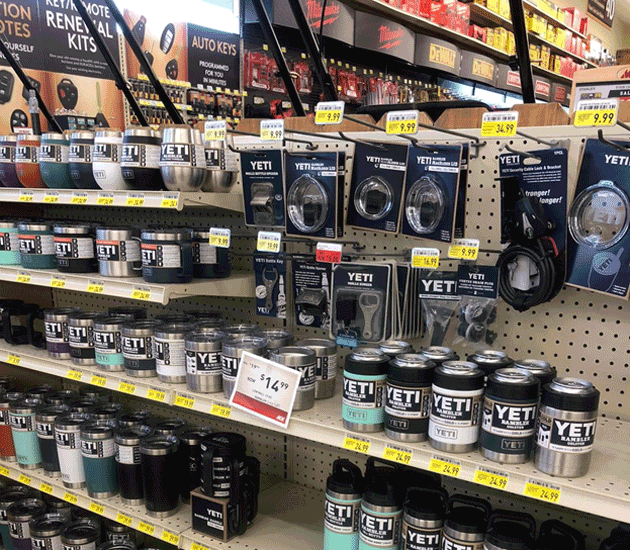 Now, I knew about Yeti before this trip to the hardware store. Everyone I know who owns a Yeti product loves it.

But this was the first time I saw a huge checkout display for its products.

So, I sparked up a conversation with the cashier. She said, “We’re selling tons.”

As you may know, I specialize in IPOs… and YETI intrigued me from the beginning.

When I got home that day, I analyzed the company’s financials… business model… and brand.

It turns out Yeti is an exceptional business. Its sales have jumped 54% per year since 2013.

It’s also profitable, which isn’t something you can say about many IPOs. Over the past year, it’s generated more than $70 million in income on $850+ million in sales.

But the most impressive thing about Yeti is its iconic brand.

The company has a hyper-loyal fan base, much like Tesla (TSLA). Its customers show off their coolers and mugs with pride, and its products are top of the line.

That’s incredibly important. According to American Express, 54% of people prefer to only ever buy their favorite brand. For millennials (Yeti’s target customer), it’s 62%!

According to Google, people search for “Yeti” most frequently in Wyoming, Colorado, Hawaii, Maine, Montana. New York is 49th!

Some might call Yeti a boring stock. That shouldn’t stop you from investing in it. Some of the best stocks ever have been “meat and potatoes” businesses.

Home Depot (HD) is a perfect example. Shares of the hardware store chain have surged 680,000%+ since it went public in 1983. That’s 10 times what Apple has returned since its IPO… and Apple went public nearly a year before Home Depot! 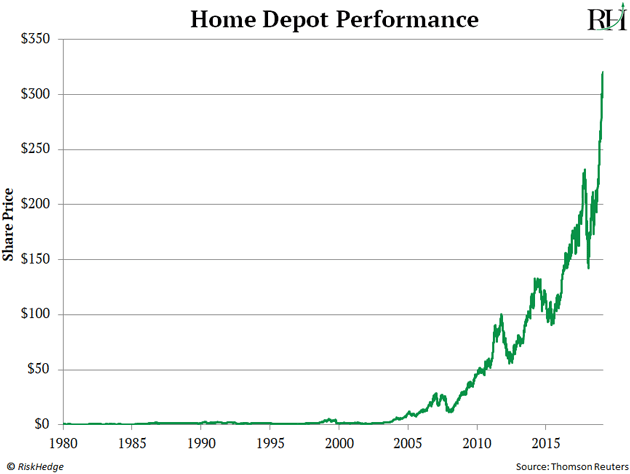 Tractor Supply Company (TSCO)—a retail chain that sells everything from farm and pet supplies to clothing—is another example. It’s skyrocketed more than 7,800%+ since its 1994 IPO. 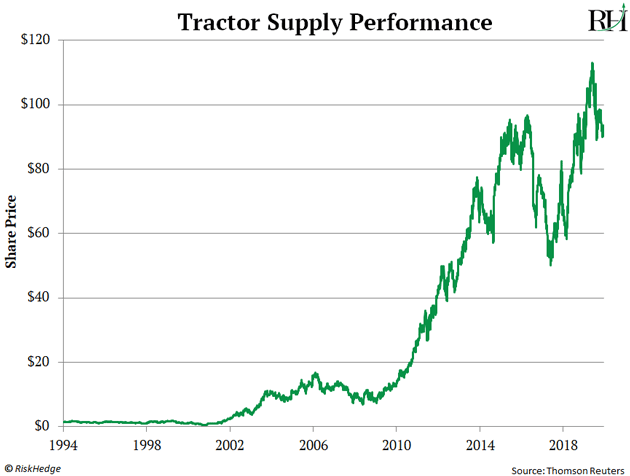 Like these companies, Yeti has blue-collar appeal. It’s already a hit with people who like to fish, hunt, hike, and tailgate. Now, it’s expanding to the mainstream...

In September, Yeti announced a multi-year deal with the Professional Golf Association (PGA).

It won the exclusive right to sell its products at 32 Tournament Players Club (TPC) golf courses, along with tour tournaments.

More importantly, Yeti is just beginning to go global. Just 4% of its sales come from outside the United States.

This all tells me one thing…

Below you can see that YETI had a strong IPO. It surged 110% in its first six months as a publicly traded company. Ever since then, it’s been “digesting” that big gain. 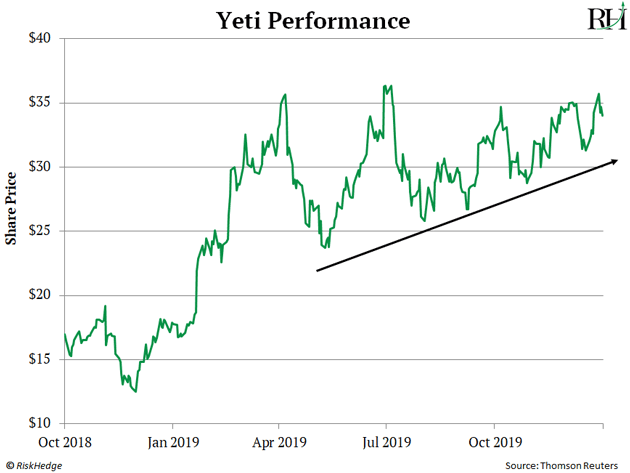 YETI now appears to be on the verge of a major breakout. If that happens, the stock should head much higher over the next 12 months… and likely beyond.

This is an easy-to-understand business that’s flying under the radar right now.

What’s been your best “invest in what you know” stock over the years? What’s one that you think people are overlooking today? Tell me at justin@riskhedge.com.