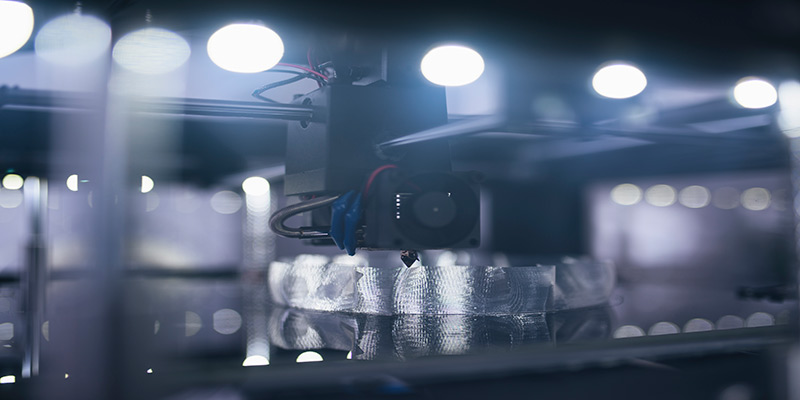 This Hated Disruptor Stock Is Coiled for Big Gains

David Stanley was a convicted felon… and one hell of a salesman.

When Americans were going wild for tech stocks in the late ‘90s, he convinced a group of investors to put $28 million into what they thought was his hot internet startup.

But it was a fraud. Stanley would blow most of the cash on an obscenely lavish “launch party” in Vegas. He paid $16 million to rent out the MGM Grand and hire world-famous bands KISS, The Dixie Chicks, and The Who to perform.

The cops caught up with Stanley and locked him in jail in 2000.

Investors got rich and partied as the Nasdaq shot up 380% from 1996-2000. The party stopped when the bubble popped and the Nasdaq cratered 80%+, wiping out millions of retirement accounts: 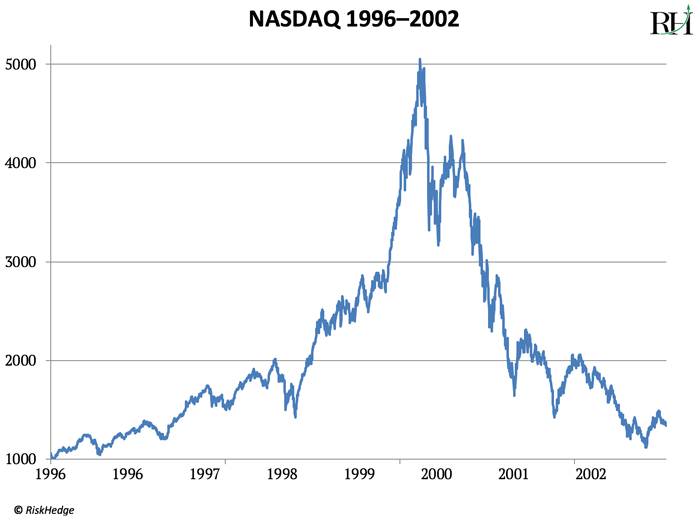 I’m sure you’ve seen this bubble chart dozens of times. But today I’m going to show you a secret hidden in it that’s key to making big profits in disruptive stocks.

In fact, it’s telling us to buy a specific disruptive stock today, as I’ll show you in a minute.

First, let’s zoom out to get the full picture. Here’s the Nasdaq from 1996 through today: 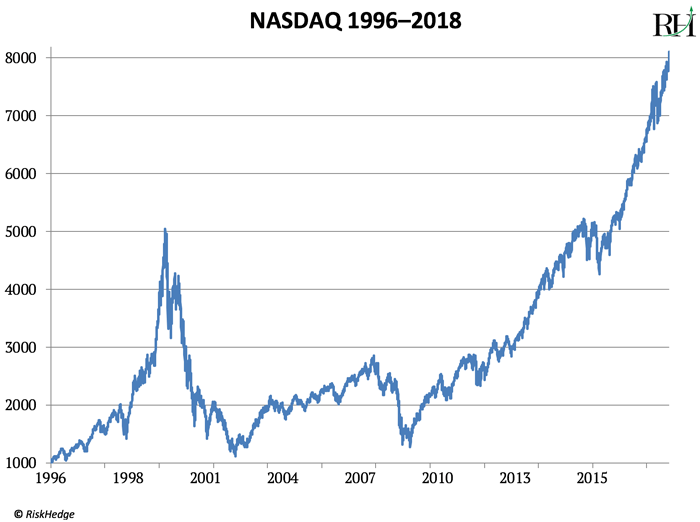 Most folks remember the dot-com bubble for the irrational excitement that gripped markets and drove stocks to absurd levels. And for the stunning sums of cash that poured into silly internet companies like pets.com that were supposed to “change the world” and make investors rich.

But the thing is… the internet really did change the world.

And many internet stocks really did make investors rich.

Do you know that the largest, most powerful companies on earth today are tech firms? Apple, Amazon, Google, Microsoft, Facebook, and Chinese tech giant Tencent are six of the seven biggest publicly traded companies on the planet.

Some of these stocks weren’t around yet during the Nasdaq bubble. But had you bought the ones that were around in the aftermath of the crash, you would’ve made so much money that the gains are almost hard to believe.

It would’ve been really, really hard to hold these stocks through their big ups and downs over the last 15 years. But if you managed to do it, your $5,000 investment could’ve ballooned into $1.5 million.

It’s important to understand that the late ‘90s Nasdaq runup was not unusual. It followed a script that disruptive stocks follow over and over and over again.

Because they set out to accomplish things that have never been done before, disruptive stocks are prone to hype and wild exaggeration. Investors get carried away with dreams of riches. Their imaginations run wild and they bid disruptive stocks up to the moon.

This often happens when a new technology is immature and not ready for “prime time.” Reality eventually sets in, the sector crashes, and overeager investors get wiped out.

In 2012, The Economist dubbed 3D printing the “third industrial revolution.” Promoters claimed that every American would soon have a 3D printer in his house, just like we have paper printers today. These magical devices would “print” anything we wanted, on demand.

Investors ate it up and plowed billions into 3D printing stocks. 3D Systems (DDD), the largest 3D printing company, exploded to a 900% gain in two years.

Then reality set in: 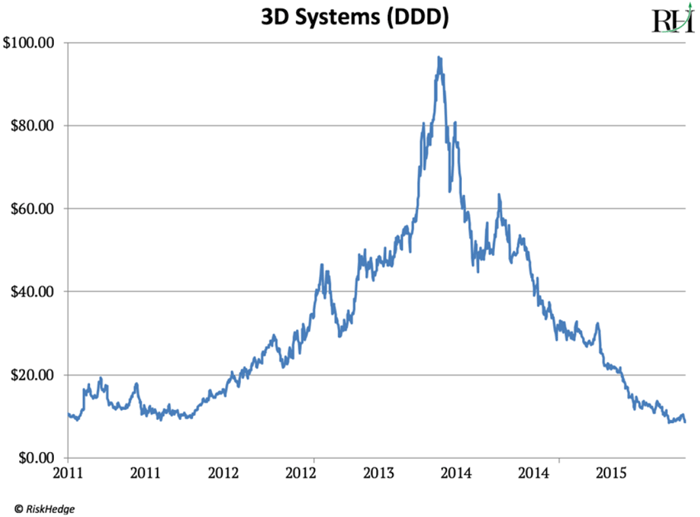 Early 3D printers were a huge disappointment. They could make only flimsy plastic trinkets that had little use. When this dawned on investors, the two largest 3D printing stocks plunged 92% and 86%.

BUT—3D printing itself is no gimmick. Set aside the fantasy about a 3D printer in every household, and you’ll realize the technology really is revolutionary.

Airbus (EADSY), one of the two biggest plane makers, is 3D printing thousands of parts for its planes. Management says these parts are around 50% cheaper to 3D print rather than manufacture the conventional way.

Rival Boeing (BA) 3D prints over 50,000 parts for its planes. Management says it saves $3 million per 787 Dreamliner because these parts are cheaper to make.

Here’s the key to understanding why 3D printing is so important. Conventional manufacturing usually involves stamping, molding, or carving away existing material to create what you want. 3D printing, on the other hand, starts from nothing and layers on material to create an object from scratch.

For this reason, 3D-printed parts are often lighter, more efficient, less expensive, and more precise than anything humans could create before.

Take jet engine maker GE (GE) for example. It has replaced more than 850 parts of a normal aircraft engine with only 12 3D-printed components.

This reduced the engine’s weight by 5%, which saves 20% on fuel costs. The average airline spends 25% of its expenses on fuel, so you can imagine how huge a deal this is.

Leading research firm Wohlers Associates found the 3D printing market grew to $7.33 billion last year, which is a near doubling from 2014. Yet 3D printing stocks remain 80% below their 2014 highs.

Boston Consulting Group estimates 3D printing will explode to $15 billion by 2020, which is in line with my estimates. I think buying the right 3D printing stocks now is like buying Microsoft or Apple in 2002.

SSYS is one of the largest and oldest companies in the 3D printing space. It has over 18,000 customers around the world including Airbus, Boeing, Lockheed Martin (LMT), NASA, Ford (F) and Volvo (VLVLY).

I like SSYS best for two reasons. One, it holds a 25% market share in industrial 3D printing. Its main competitor 3D Systems only has an 8% market share.

Two, SSYS is on sale. Its price-to-book (P/B) ratio is just 1.2. You rarely see stocks with such huge growth potential trading for so low a price. DDD’s P/B ratio is 4.

SSYS had been stuck in a crushing bear market for most of the last four years. This year, its stock has climbed 27%. I think it has broken out of its downtrend and I expect it to climb much higher in the next 12–18 months.

That’s all for today. I’ll have a lot more to tell you about 3D printing in future issues. Talk to you next week.

Luca, I expect trade tensions to get worse before they get better. Airbus (EADSY) should do well either way though, as it has been stealing market share from rival Boeing for years now. By the way… Airbus stock just hit an all-time high.

Following on your thesis on DIS, what’s are the odds of AAPL taking out DIS to literally TAKE OVER the services businesses?

I expect the likes of Apple, Amazon, and Facebook to push into the content space over the next few years. It wouldn’t shock me if a bigger company makes a play for Disney which, as you know, is the undisputed king of content.